The Media and Cancel Culture 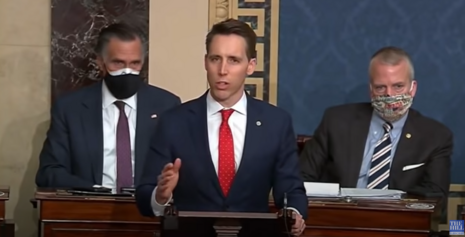 What do 8 Pennsylvania Congressmen, 21 Pennsylvania State Senators, The New York Post and Missouri Senator Josh Hawley have in common?

Answer: The media’s cancel culture. A culture in which the weapon of choice for the liberal media is simply shutting down reporting of news they don’t like - refusing to publish it.

Back in the Pennsylvania state capital of Harrisburg, 21 Republican state senators had separately decided to send a letter to US Senate Majority Leader Mitch McConnell and US House GOP Leader Kevin McCarthy, laying out their own objections to certification.

In this situation in particular, this is known as “news.” You can agree with what these people are doing, or you can disagree. But that they are doing it is, decidedly, news. They are, collectively, 29 quite serious elected officials in what emerged as the battleground state of Pennsylvania. The American people have a right to know what they are doing and why. To say the least, in this media environment, these people should have been all over the media -- and they weren’t. The media effectively cancelled their coverage.

Then there was the report from the campaign of the disappearing Hunter Biden laptop story. As will be recalled, The New York Post ran an investigative story that revolved around obtaining the contents of Hunter Biden’s laptop. Not only was the story blacked out in major media outlets, Twitter shut down The Post’s account to shut down the story.

Now comes this jewel of a story involving Senator Josh Hawley. The headline from The St. Louis Post Dispatch: "No book for you: Simon & Schuster drop Hawley publication."

This jewel quoted the book publisher as follows:

“After witnessing the disturbing, deadly insurrection that took place on Wednesday in Washington, D.C, Simon & Schuster has decided to cancel publication of Senator Josh Hawley’s forthcoming book, ‘The Tyranny of Big Tech.’

“We did not come to this decision lightly," the publisher added. "As a publisher it will always be our mission to amplify a variety of voices and viewpoints: at the same time we take seriously our larger public responsibility as citizens, and cannot support Senator Hawley after his role in what became a dangerous threat to our democracy and freedom.”

“I was representing my constituents, leading a debate on the Senate floor on voter integrity, which they have now decided to redefine as sedition.

This could not be more Orwellian… Let me be clear, this is not just a contract dispute. It’s a direct assault on the First Amendment… I will fight this cancel culture with everything I have. We’ll see you in court.”

Indeed. And yes, as a private company Simon and Schuster has the right to publish or not publish whatever they want. But clearly they had already made their decision to publish, and cancelled simply because they don’t like what Hawley said on the floor of the Senate.

What all three of these incidents have in common is liberal media outlets --  be they cable news, major newspapers, Big Tech or a big publishing company -- using one or another form of the cancel culture to silence views they do not like.

“The Trump protest of the Capital yesterday is already being used as a pretext for an unprecedented crackdown on civil liberties. In the last several hours, we have heard people in positions of power and authority demand those that support Donald Trump should no longer be allowed to publish books or use the internet or fly on airplanes.”

The increasingly serious problem in America,  just as Tucker Carlson has said, is “an unprecedented crackdown on civil liberties.” And that crackdown is being aided and abetted by a liberal media and their practice of not covering stories they don’t want the American people to see and then judge for themselves.

This is cancel culture at work. The media in its different platforms is pushing this.

And it is dangerous.