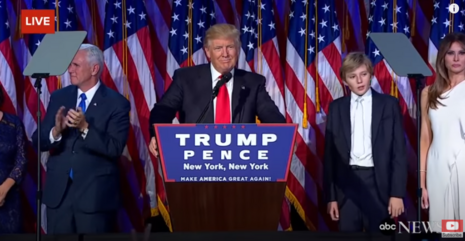 After spending four years assailing Donald Trump, suddenly the media wants to give peace a chance. Fox’s Greg Gutfeld astutely observed this the other night on Fox’s The Five. Said Greg:

GREG GUTFELD: “It’s like a miracle! The media and Democrats converge on one message! It’s time to just move on. Time to heal! Here’s how the president-elect and some in the liberal media described it over the weekend:

JOE BIDEN ON SATURDAY: This is the time to heal in America!

MSNBC ON SUNDAY: We’re getting decency back in our country.

And I would add The Washington Post’s columnist Alexandra Petri headlined her post-election column this way: “It’s time to unite, but if it’s not too big a bother, could you accept the results?”

Then there’s MSNBC’s Joe Scarborough: “It's time for us to take a deep breath and move forward.”

Really? Really? These media figures and oh so many more want us to “unite”, “heal” and “accept the results”?

Let’s take a look back at the media’s idea of healing and moving on over the last four years after the 2016 election won by President Trump.

Here is CNN’s Brian Stelter in 2019 as reported by The Daily Caller:

‘So something is wrong,’ Stelter said in the opening monologue of his show, Reliable Sources.

‘There are lots of theories about what it is. There are some doctors who think they know,’ he said. ‘Others say we shouldn’t speculate. There are ethical questions about having this conversation at all, but we can’t tiptoe around it anymore. We’ve got to talk about this.’”

Here is CNN’s Chris Cuomo in 2019 interviewing Kayleigh McEnany: The President, he said, is “patently racist.”

Here is The Washington Post headline on an Op-Ed by one Erika Lee, the director of the Immigration History Research Center at the University of Minnesota. "Trump’s xenophobia is an American tradition — but it doesn’t have to be

Here is The Washington Post on January 20, 2017 at 12:27 pm - a mere 27 minutes after Trump was sworn into office. "The campaign to impeach President Trump has begun."

Here is the editorial board of The New York Times on February 17, 2017, 29 days after Trump was inaugurated: "Bring On the Special Prosecutor."

Got all that? The media spent their time after Trump was elected demanding a special prosecutor and impeachment, calling the president mentally unstable, a racist, xenophobic and more. They were utterly unwilling to accept the 2016 results, and made it their mission to overturn those results in whatever way feasible.

One could go on and on and on with examples like this from the mainstream media over the last four years.

And now they demand Americans come together in a kumbaya moment?

Somehow, in someway, I suspect the answer from most if not all 70-plus million Trump voters will listen to all this be a resounding, decidedly emphatic no.

Or put another way? I suspect that the liberal media’s last four years of chickens are about to come home to roost.