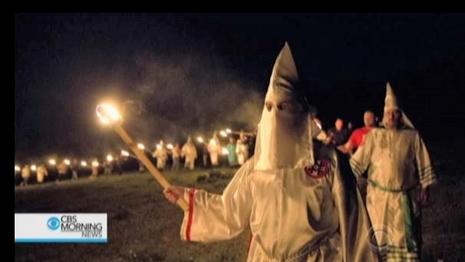 On June 14th, The Atlanta Journal-Constitution ran this headline: "More than 1 million sign petition to designate KKK as terrorist group."

The AJC story said, in part, this:

“More than 1 million people have signed an online petition calling for the government to designate the Ku Klux Klan as a terrorist organization.

The “Change KKK status into Terrorist Organization” campaign is one of at least three petitions that have gone viral on the change.org website since George Floyd’s death, according to Newsweek."

The heading of the next section of the story reads: “A history of terror”

Then the piece, bylined by ArLuther Lee, goes into a curious description of the Klan. It accurately discusses the Klan’s history of terrorizing black Americans.

“During the eras of Reconstruction and Jim Crow, the band of white vigilantes carried out lynchings, bombings and assassinations on black people with impunity, and with few — if any — legal consequences.

During the civil rights movement, the Klan joined forces with Southern police departments and governments to oppose desegregation. Several members of the Klan have been convicted of murder in the bombing of the 16th Street Baptist Church in Birmingham in 1963 and for the deaths of civil rights workers in Mississippi in 1964.

…In some places, the KKK’s heritage is still woven into the fabric of American politics. Republican lawmakers in Tennessee resisted a Democratic push just this week to eliminate a holiday for Confederate general and KKK Founder Nathan Bedford Forrest and remove a bust of him from the State Capitol, according to Forbes. Singer Taylor Swift spoke out on the controversy Friday, calling for the bust to be taken down.

…Coincidentally, the upcoming Republican National Convention, which was moved this week from Charlotte, North Carolina, to Jacksonville, Florida, has been scheduled on the 60th anniversary of the city’s KKK race riot — known as “Ax Handle Saturday,” which happened on Aug. 27, 1960.”

And on it goes.

But there is something very curious about this article. Nowhere — literally nowhere — is the history of the relationship between the Klan and the Democratic Party mentioned. So let’s do a quick historical refresh:

Notice the mention of the Klan’s beginning above? There is no reference to the quite central historic fact that, according to Columbia University historian Eric Foner, the Klan was used from the get-go as “a military force serving the interests of the Democratic Party.” Or, in the words of University of North Carolina historian Allen Trelease, the Klan was used as the “terrorist arm of the Democratic Party.”

“Klansmen repeatedly attacked Negroes for no other other stated offense than voting, or intending to vote, the Republican ticket. Their repeated admonition was to either vote the Democratic ticket or stay at home.”

It is occasionally recalled that the late Senator Robert Byrd, who served as Senate Democratic Leader, had been in the Klan. What is not mentioned and certainly isn’t in this AJC article is that Byrd was but one Klansman elected to office as Democrats. There were many others.

One of those many others was one John Gordon Brown, who served as a general in the Confederate army. After the war he founded his state’s chapter of the Klan and was elected to the United States Senate as a Democrat. He also would serve as governor. His state? That would be the AJC’s very own state of Georgia.

One of the memorable moments of the 1960s civil rights era was “Bloody Sunday.”  That would be the day that civil rights protesters on the march to Montgomery, Alabama, the state’s capital, were attacked and beaten by armed police on a bridge in Selma. The attack famously took place as the protesters marched on the Edmund Pettus Bridge. And who was Edmund Pettus? He was a Democratic Senator from Alabama - and the head of the Alabama Ku Klux Klan.

Which is to say, one Klan member after another served in public office at the federal, state and local level as Democrats - and made the Klan a seriously potent force inside the Democratic Party.

So powerful was the Klan that the 1924 Democratic Convention, held in New York’s Madison Square Garden, is known to history as the “Klanbake.” A move was afoot to denounce the Klan. But led by two-time Democratic nominee and former Woodrow Wilson Secretary of State William Jennings Bryan the resolution denouncing the Klan was defeated. And oh yes, when Democrat Wilson, a rabid segregationist, was President he made a point a point of showcasing the film Birth of a Nation at the White House. The film infamously celebrated the Klan.

And not to be forgotten was Democratic President Franklin Roosevelt nominating Alabama Senator Hugo Black to the US Supreme Court. Black was, yes indeed, a “gold passport” member - a life member - of the Klan. FDR assured Black he, FDR, had no problem with Black’s Klan membership because, as Black would later recount: “He said that some of his best friends and supporters in the state of Georgia were strong members of that organization.”

One could go on - and on and on with the long and shameful ties of the Democrats to the Klan. Yet if one is reading the AJC’s article there is not even a whisper of this history. Not a peep. Nor is there this mention of a private citizen doing a TV interview in 2000 with NBC’s Matt Lauer. The private citizen had been mentioned as a possible Reform Party candidate for president, and he was talking about his decision not to run and what a disaster the party had become. Said Donald Trump of Klan leader David Duke and Duke’s involvement with the party: He’s "a bigot, a racist, a problem.” And also said: “This is not company I wish to keep.”

Yet there is the AJC trying to leave the impression Trump is a supporter of the Klan —  which, charitably put, is flatly untrue.

So what do we have here? What we have is The Atlanta Journal-Constitution, the newspaper of a city that is in the midst of its own racial turmoil, writing up the Ku Klux Klan - and deliberately omitting its long, deep and powerful relationship with the Democratic Party that went on for years and years, including in the paper’s very own state of Georgia.

It is a classic example of omission journalism, an attempt to re-write history as if it never existed.

And it won’t work.