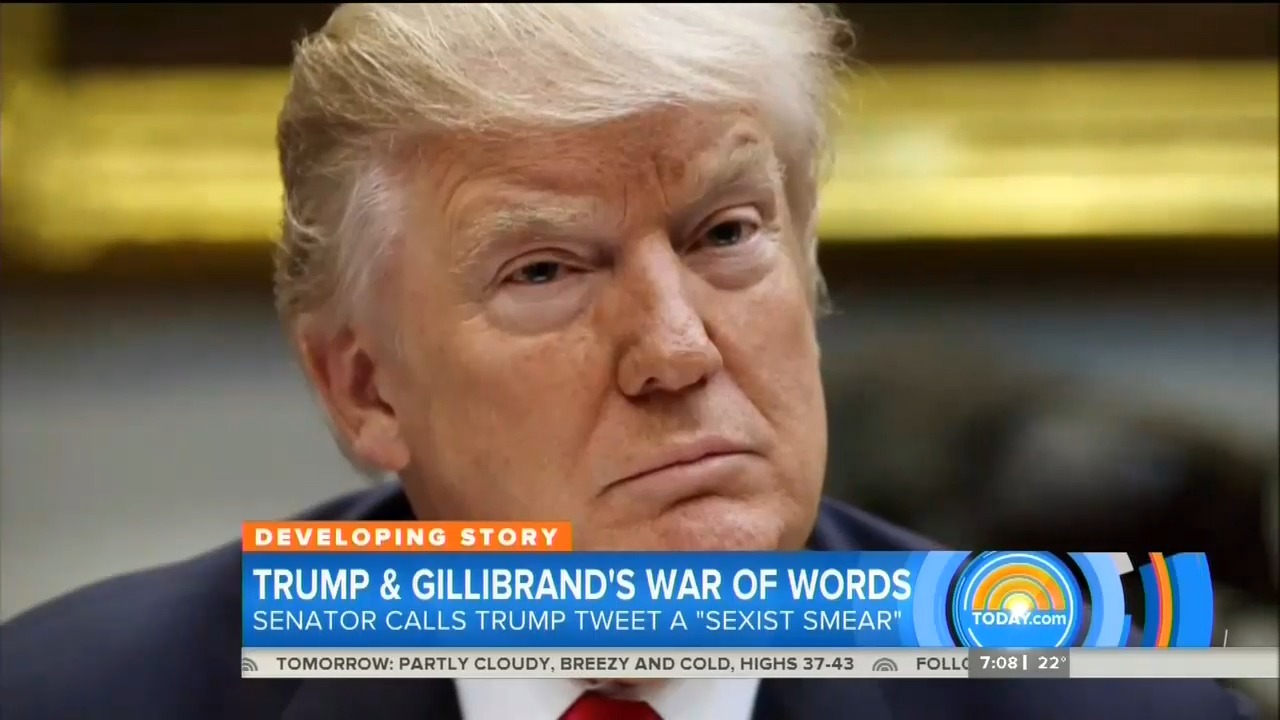 What is the matter with these people?

This has been discussed elsewhere, but with more of the same nonsense since the subject of one of the latest presidential tweets will not go away, let’s continue.

Here is the now-famous tweet. (Actually, there are now a ton and a half of famous Trump tweets but this is one of the latest:

“Lightweight Senator Kirsten Gillibrand, a total flunky for Chuck Schumer and someone who would come to my office “begging” for campaign contributions not so long ago (and would do anything for them), is now in the ring fighting against Trump. Very disloyal to Bill & Crooked-USED!”

And here, stunningly - or maybe not - is Morning Joe’s Mika Brzezinski on this tweet, via Fox News:

“[Trump] should have apologized for being a sexist pig,” Brzezinski said. “And the women around him, his wife, who has a platform against cyber bullying, that’s a joke. That’s the saddest thing I’ve ever seen.”

Brzezinski then shifted her attention to Ivanka Trump, ‘Who came to Washington… to develop a platform for women,’ but has stood by her father.

‘Go home. You’re doing nothing if you stand by this president,’ Brzezinski said of the first daughter.”

In an earlier go at this Brzezinski had said that the President “literally sexually harassed, in a cruel way, a woman on Twitter.”

This, by the way, is the same Mika Brzezinski who had said this days earlier when the subject was the woman who had charged Minnesota Democrat Senator Al Franken with groping and more. Said Mika:

“I'm just wondering if all women need to be believed. And I'm concerned that we are being the judge, the jury, and the cops here and so did Senate Democrats getting ahead of their skis. And, trust me, Kirsten Gillibrand, I want you to run for president, but you gotta keep it real.”

Gillibrand, at that point, had said that Bill Clinton should have resigned during his Lewinsky scandal, drawing the wrath of the Hillary camp which promptly accused Gillibrand of, well, in so many words, begging for Hillary’s old Senate seat and access to the Clinton fundraising machine.

When its liberal Al Franken, again with actual allegations of groping and more, Brzezinski wonders aloud about whether “all women need to be believed.”

Then with a single tweet, Brzezinski is accusing Trump of, yes, sexual harassment and being a sexist pig.

As noted elsewhere, Trump has used this comparison of a politician begging him for favors repeatedly over the years. Here’s but one, as recounted in Fortune magazine last fall:

"But look back into his career, and you’ll find that Trump was even blunter. According to Wayne Barrett’s 1992 biography Trump, the Deals and the Downfall, Trump had boasted he could “buy” a U.S. Senator for $200,000 and gleefully recounted once how Hugh Carey, New York’s governor, would do 'anything' for a campaign contribution."

Perhaps I missed the news of the late Governor Carey having a sex change operation? The fact is that five minutes on Mr. Google reveals Trump saying what he said of Gillibrand of a very long list of male politicians and even entertainers who have sought from Trump everything from campaign contributions to appearances on this or that television or radio show.

So the real question is: why in the world would Brzezinski and a whole host of other liberal media types (not to mention liberal politicians) make something sexual out of something Trump is on the record saying about all kinds of men? The latter group including but not limited to the likes of John McCain, Mitt Romney, New York Attorney General Eric Schneiderman, David Letterman and Glenn Beck?

The answer is to be found in the essence of liberalism and its obsession with identity politics. Brzezinski is a classic case of someone who never sees a human being but instead always judges someone by gender or race. In this case, Gillibrand - who received exactly the same treatment from Trump as he has dished out repeatedly to all manner of men - is no longer a United States Senator. No, Gillibrand is a woman! A victim! A target of sexual harassment from the Tweeter-in-Chief!

This would be utterly laughable if in fact it were not representative of a serious problem with modern liberalism in general and liberals in the media in particular.

Brzezinski, sadly, was far from alone in seeing sexism in something Trump has said repeatedly about men. Others on this same bizarre path included The Washington Post, Newsweek and CNBC (which said the Trump tweet was “suggestive”).

But the hands-down winner of the award for the liberal media obsession with sex was the editorial board of USA Today. The paper headlined:

A president who'd all but call a senator a whore is unfit to clean toilets in Obama's presidential library or to shine George W. Bush's shoes: Our view

Allow me to rephrase:

What this editorial demonstrates - vividly - is that USA Today has a serious, make that very serious, problem with treating women as equals. It is apparently okay for Trump to dish exactly in this fashion when it comes to men, but say the same of Gillibrand? Why, smelling salt time for USA Today. This is exactly the atmosphere in which real sexual harassment takes place - and one has to wonder what goes on in the corridors of a paper that is so vividly obsessed with sex. (Or for that matter any other liberal media outlet as the last few weeks at CBS, NBC and others have demonstrated.)

Similarly the Brzezinski comments about Trump and Gillibrand are nothing less than a serious indicator that when it comes right down to it liberals see women not as equals but as victims. And in this case sex obsessed victims at that.

Whatever else one wants to say about Trumpian tweets it is increasingly crystal clear that in the manner of Fox News, talk radio and the Interne they are forcing the liberal media across the board to rip off their masks of objectivity and show what really is at the core of their liberalism: an obsession with sex and race.

Not good. And not surprising.