The New York Daily News: Donald Trump supported by former KKK leader David Duke: 'I hope he does everything we hope he will do’

The former grand wizard of the Knights of the Ku Klux Klan told his bigoted followers that not voting for Trump would be “treason to your heritage” and implored them to volunteer for the billionaire candidate because they would find like-minded haters in the campaign.”

The paper then wrote in breathless style:

Donald Trump once said he’s “the least racist person there is.”

Even so, multiple white nationalists have found appeal in Trump’s message and have aligned their support with the presidential candidate.

The latest is David Duke, a former Ku Klux Klan grand wizard, who called for listeners of his radio show to support Trump and volunteer for his campaign.

‘Go in there, you’re gonna meet people who are going to have the same kind of mindset that you have,’ Duke said Wednesday on the David Duke Radio Program, as first reported by Buzzfeed.

Duke reasoned that ‘voting against Donald Trump at this point is really treason to your heritage.’

And so it went in the mainstream media universe, Trump’s rejection of Duke irrelevant to their stories.

Did Trump stumble in that now-famous CNN Jake Tapper interview when asked about Duke? Yes. But he not only corrected the next day, as documented here by McClatchy he was well on record speaking out against Duke not only before the Tapper interview but as long ago as the early 1990’s. Wrote McClatchy’s reporter, with bold print for emphasis supplied by me:

Trump eagerly denounced Duke on more than one occasion decades ago, according to Factcheck.org.

In 2000, Trump told NBC’s “Today” that he wouldn’t seek the Reform Party nomination because he said the party was “self-destructing.”

Matt LAUER: “When you say the party is self-destructing, what do you see as the biggest problem with the Reform Party right now?”

Trump: “Well, you’ve got David Duke just joined – a bigot, a racist, a problem. I mean, this is not exactly the people you want in your party.”

The New York Times also reported at the time that Trump issued a news release referring to Duke as “a Klansman” and not the “company I wish to keep.”

Trump also spoke out against Duke in 1991 – three days after Duke lost a race for governor in Louisiana.

CNN’s Larry KING: “Did the David Duke thing bother you? Fifty-five percent of the whites in Louisiana voted for him.” 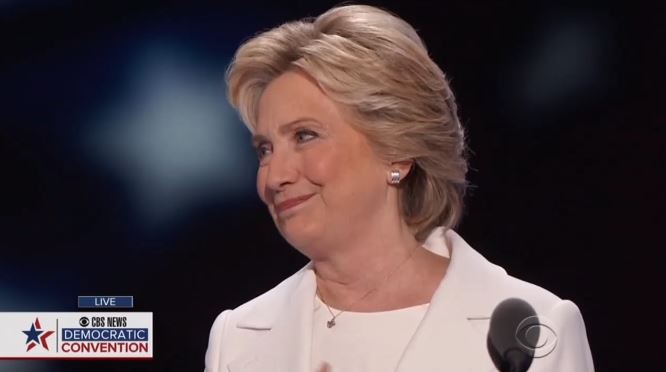 So with all this attention to Trump on David Duke, surely you read the news about John Bachtell, right? He endorsed Hillary and the headlines were everywhere. Oh, wait, sorry. Mr. Bachtell’s Hillary endorsement was apparently not newsy enough to make the mainstream media headlines.  Curious, yes? If the endorsement of Trump by the ex-head of the Ku Klux Klan is big news, one would expect a Hillary endorsement by the head of the Communist Party USA would be a big deal as well.

That’s right. Hillary-supporter Bachtell is, as seen here, the very proud “national chair of the Communist Party USA.” That’s right, Mr. Bachtell is a literal card-carrying Communist. You recall the Communists, yes? The folks who produced Stalin and Mao? The advocates of a political philosophy that is described in The Black Book of Communism as being responsible  for “between 85 million and 100 million” deaths? in “the most colossal case of political carnage in history.” Ring a bell? The Soviet Union? The Cold War? The Iron Curtain? Korea? Vietnam? The Khmer Rouge? Come on, you remember.

Apparently the mainstream media does not remember what Mr. Bachtell’s Communist Party represents — or maybe it’s something else. Maybe, just maybe, the media doesn’t care about Hillary receiving the Communist Party chairman’s endorsement because, well, if you’re a lefty to begin with there’s nothing seen as out of the ordinary much less wrong with this.

Bachtell’s endorsement of Hillary Clinton focuses on the idea that there may be some Communists and others on the left who are unfortunately tempted to vote for Green Party candidate Dr. Jill Stein to “send a message” to Hillary and the Democrats that they are not far left enough. Bachtell sees this as a “flawed strategy” and heaps praise on Clinton as being the only way to save the country from Donald Trump, whom he sees as “a clear and present danger, an unpredictable candidate in an unpredictable election.”

Says Bachtell in making the Communist Party pitch for Hillary:

Some are voting for Green Party candidate Jill Stein to “send a message.” Still others hope a Clinton defeat provokes a crisis in the Democratic Party leading to its break-up.

Others see the danger of Trump and want to defeat him. But like Sanders supporter and RootsAction.org founder Norman Solomon, they advocate a “safe state” strategy: vote for Clinton in the battleground states to ensure she wins but vote Green Party in the solidly blue (safe) or solidly red states.

This is a flawed strategy. First, like it or not, we have a two party system. One of the two major parties will win and govern. If this were a parliamentary democracy different tactics would be called for.

Wall Street interests may dominate both parties but they reflect vastly different electoral coalitions and class, racial and social make up.

Many leaders of labor, civil rights and other democratic grassroots movements, including democratic socialists, are leaders within the Democratic Party.

To call for a vote against Clinton is to separate oneself from this electoral coalition....

This election will be a national referendum on racism, misogyny, homophobia, xenophobia and Islamophobia. The aim should be a landslide defeat of Trump and a decisive rejection of hate.

The election of Clinton as the first woman president would make history. A landslide would not end sexism, but it would represent a mighty blow just as the election of President Obama was a blow against racism. It would advance democracy.

A landslide makes it more likely that GOP Congressional and state legislative majorities can be ousted and an end put to the politics of obstruction. Most people tend to vote straight ticket.

A landslide will give added weight to the progressive platform adopted at the Democratic Convention and give encouragement to appoint progressive Supreme Court justices. It would be added pressure against backsliding on opposition to TPP and other trade deals. It will put public opinion and the movements in a better position to pressure against Clinton's tendency toward military adventurism and policies of regime change.

With a Democratic president and Congress the post-election political terrain will shift and give immediate momentum to the new Clinton administration.

Bachtell almost sounds like some middle-of-the road liberal. As reported by The Washington Times, which did cover the story: Communist Party USA: ‘Working with the Democratic Party’ is key

Exactly. But, of course, Communism is not about middle-of-the-road liberalism, is it?  It is a monstrous political ideology, totalitarianism on steroids that makes the Ku Klux Klan and its horrendous history of racial violence look like a piker.

So with all of this, why is it that when the ex-head of the racist Klan endorses Trump it makes headlines - but when the head of the Communist Party USA endorses Hillary the mainstream media merely shrugs?

The obvious answer is that the mainstream media, leaning leftward itself, sees nothing in the least abnormal or explosive — much less newsworthy — in the nominee of the Democratic Party being endorsed by a Communist leader.

Recall that priceless tale of New York Times reporter Walter Duranty? Duranty, The Times Moscow Bureau Chief, who was such a fan of Joseph Stalin when covering the Soviet leader in the 1930’s that quite mysteriously — hmmm — the tales of Stalin’s state-run collectivist-generated famine that killed millions never made the paper?

While lots of gushing Duranty prose of “Uncle Joe” (as FDR famously called Stalin) did make publication? Prose that would win Duranty — no kidding — the Pulitzer Prize?  Decades later, even The Times was embarrassed enough about Duranty’s pro-Stalin propaganda in the paper to inquire if the Pulitzer could be withdrawn. It wasn’t.

While the Duranty episode is egregious, it is indicative of the leftist tilt many mainstream journalists  had and still have, a tilt that finally was so blatantly obvious it gave rise to Fox News, talk radio and countless web sites (such as the one you are reading) designed to balance news presentation.

Is the fact of Hillary Clinton’s endorsement by America’s top Communist  a stop-the-presses moment? No. But the lack of attention to the fact by the mainstream media is a small yet telling reminder of just where so many “mainstream” journalists really have their head — and their hearts.

Hillary Clinton endorsed by the Communist Party USA? Nothing to see here, folks, move along.