They are and were the technology of their day. And there are more similarities.

Both Nixon and Clinton had 100 percent control of their technology. Nixon had several offices and, according to the Senate Watergate Committee testimony of Nixon White House aide Alexander Butterfield, there was “tape in each of the President’s offices….kept by the Secret Service…”. 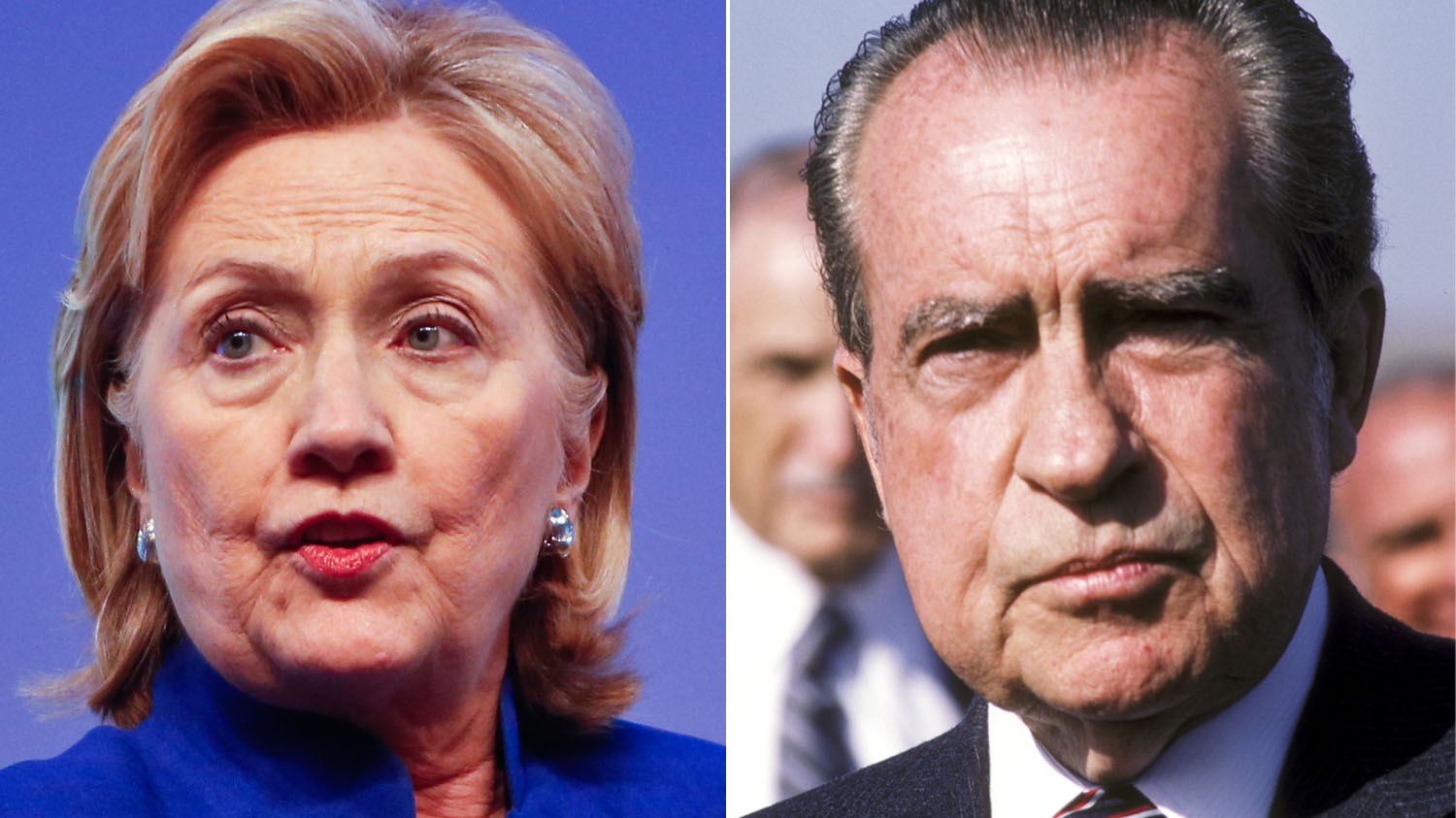 As Nixon had taping systems in more than one office, Clinton not only set up more than one non-governmental e-mail, (as reported here by Fox’s James Rosen) she had her own server installed in her Chappaqua, New York home to store them. In both cases -- Nixon’s taping system and Clinton’s server -- protection was provided by the Secret Service.

As the issue of Hillary Clinton’s e-mails mushrooms, let’s take a stroll down the media’s memory lane to another time and another scandal and another woman. The scandal, of course, is the Watergate scandal and the role the tapes played in bringing down a presidency.

On July 13, 1973, Nixon White House aide Alexander Butterfield was testifying to the Senate Watergate Committee. In the course of the testimony he was asked about John Dean’s assertion that he (Dean) had thought he was being taped in a conversation with the President. To which Butterfield surprised -- make that stunned –  everyone with a response in which he said Dean could have no idea he was being taped. Why? Because “there is tape in each of the President’s offices. It is kept by the Secret Service, and only four other men know about it. Dean had no way of knowing about it. He was just guessing.”

With that the revelation of the secret Nixon taping system -- the Nixon version of Hillary’s server in her home -- was out there. With Congress, the Watergate Special Prosecutor and especially the media instantly in hot pursuit of the tapes. Tapes that Nixon, at that point, had 100 percent in his control. And the President had zero intention of giving them up.

“No. Never.” was his response when his lawyer, Fred Buzhardt, said the special prosecutor would want them. “No, no, no.”

Writing in their detailed account of the period in The Final Days, the Washington Post Watergate duo Bob Woodward and Carl Bernstein wrote:

“Nixon was adamant. The indiscretion of installing the tape system should not forever burden the office of the presidency, he told (his lawyer Fred) Buzhardt. No outsider could comprehend the breadth of the intimate material on those tapes. Those tapes were the essence of the presidency. They contained the private thoughts and comments not only of the President but of foreign leaders, Congressmen, his aides, even his family. Buzhardt must understand. If the President broke the confidence of those who unburdened themselves in his office, it would shatter the presidency - not only his own but also his successors.”

The answer, Nixon believed, was to claim executive privilege. But by July 23rd, a mere ten days after Butterfield’s revelation that the taping system existed, nine recorded conversations were subpoenaed by the special prosecutor. So too would the Senate Watergate Committee issue a subpoena.

The media couldn’t get enough of the tapes story. They hounded and hounded and hounded. Nixon ordered his attorney general to fire the special prosecutor to put an end for a demand for the tapes. Attorney General Elliot Richardson refused, and resigned. What would become known as “the Saturday Night Massacre” was under way, with Richardson’s deputy resigning as well rather than follow Nixon’s orders. Finally the number three at Justice, Solicitor General Robert Bork, carried out firing the prosecutor. All media hell broke loose, the end result being a new attorney general and a new prosecutor, and the demand for the tapes went on.

Now Nixon tried compromise -- having his personal secretary, Rose Mary Woods, transcribe the tapes that Nixon was willing to have transcribed. In the course of this eighteen and a half minutes of a key conversation were erased.  What happened next when news of the missing eighteen and a half minutes of tape went public? As it were, the you-know-what hit the media fan. Woodward and Bernstein again:

“For the next two weeks news of the gap filled the nation’s front pages.” Nixon aides were summoned to court to tell a federal judge what they knew. This included, of course, Rose Mary Woods, the star witness in the case of the missing 18 1/2 minutes. “She steadfastly maintained that she had accidentally erased about five minutes of the conversation, no more, while talking on the telephone. The photograph released by the White House to support her testimony was cruel. It pictured the President’s secretary, contorted at her desk, one arm flung back to a phone, a foot on the transcribing pedal.”

To understate? The media went nuts. This was a handful of years after the bestselling novel and subsequent film Rosemary’s Baby (the plot of which had a motherly Mia Farrow -- mother of failed MSNBC host Ronan Farrow -- giving birth to Satan). Thus Newsweek promptly bannered the White House photo taken for the media of Rose Mary Woods in her incredibly gymnastic stretch as “Rose Mary’s Boo Boo.”

Time put the heretofore anonymous Ms. Woods on its cover  bannering "The Secretary and the Tapes."

The point, endlessly recycled, was that the only person who had 100 percent control of the Watergate tapes was Richard Nixon. It was Nixon and Nixon alone who was deciding who heard what. Now, with Nixon in complete control, evidence had been destroyed deliberately. By the time the Watergate issue reached impeachment stage, the demand for the tapes had gone to the Supreme Court. The Court ruled unanimously against Nixon. And yes indeed, there was a smoking gun on a withheld tape. Within days Nixon resigned the presidency and was returned to California as an ex-president in disgraced exile.

Later, Woodward and Bernstein also noted longtime Nixon aide Patrick J. Buchanan’s private take on the missing 18 1/2 minutes. They wrote of Buchanan saying: “Rose knows she erased a good part of it. She was protecting him. I’ve never asked her and she’s never told me what happened. It’s not hard to figure. After Rose had erased the first part the Old Man would say, ‘Oh, my goodness, Rose, somebody left the tape on.’….Either Nixon said something like ‘See what you think we should do with this, Rose,’ or she knew what to do without being told.”

Now here come the Clinton e-mails. Like Richard Nixon and his tapes, Clinton - for now - has 100 percent control of them. Already we have the tale of Deputy Assistant Secretary of State Raymond Maxwell, as reported here in The Washington Times “claiming confidants of Hillary Rodham Clinton scrubbed files on the 2012 Benghazi attack before turning them over to the accountability review board, according to multiple news sources.”

In other words, before the e-mail issue ever surfaced there is an eyewitness career official of the State Department claiming Mrs. Clinton had a cadre of the Clinton version of Rose Mary Woods doing for her just what Pat Buchanan believed the original Rose Mary Woods had done for Richard Nixon -- destroying evidence to protect the boss. Who doesn’t believe that is the reason for the server in the Clinton home? To guarantee not only 100 percent control of all the Clinton e-mail traffic but -- in the case of a subpoena for those e-mails just like there were subpoenas for Nixon’s tapes -- guaranteeing the ability to destroy evidence with no one the wiser that it ever existed. 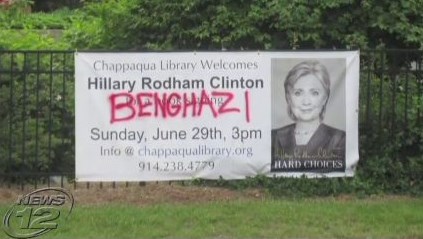 And like clockwork, there are the Democrats, the party that used its majority on the Senate Watergate Committee to issue a subpoena for Nixon’s tapes, howling in anger that the GOP-run Benghazi Committee is issuing a subpoena for the Clinton e-mails. Sauce for the goose is never sauce for the gander.

All of this is before it is reminded that Mrs. Clinton spent the 1990s asserting the Lewinsky affair was a product of a “vast right wing conspiracy”, running “bimbo eruption” campaigns against various women involved with her husband and, notably, barely escaping an indictment herself from her husband’s special prosecutor.

In the latter case, according to investigative reporters Susan Schmidt and Michael Weisskopf (both of The Washington Post and Time) writing in their book Truth at Any Cost: Ken Starr and the Unmaking of Bill Clinton, the prosecutor’s staff of lawyers decided that while there wasn’t enough evidence to convict Clinton on various Whitewater related episodes “virtually everybody..concluded that the first lady had lied.” This doesn’t even touch on the same problems her husband faced with that finger-shaking lie “I did not have sex with that woman, Ms. Lewinsky.”

This time, the issue isn’t husband Bill. But like Richard Nixon’s tapes, the issue of Hillary Clinton’s e-mails raises the issue of control of evidence, destruction of evidence - and deliberately lying about all of it.

Will the media go after Hillary Clinton’s e-mails with the ferocity they went after the issue of Richard Nixon’s tapes?

Don’t bet the ranch. Which is exactly why Congress has that subpoena power. And why Benghazi Committee chairman Trey Gowdy is using it.