Unfortunately, Dale couldn't bring himself to fact-check an obviously dubious claim from Williams. Then again, we've all come to expect such assertions from Williams, most especially about his leap-tall-building adventures in journalism.

This time the subject was negotations between the Trump administration and congressional leaders over funding for a border wall along the Mexican border to avert another government shutdown with a Feb. 15 deadline looming.

WILLIAMS: And in a part of the world where the Rio Grande is the border between Mexico and the United States -- obviously we're going to quibble over a term of art, we're building a wall on the Rio Grande ...

Williams astutely pointing out that human beings remain incapable of building structures across a narrow body of water. Oh wait, haven't a significant number of dams and similar projects already been built on the Rio Grande ...?

Following this rank absurdity, Williams continues in the same vein --

WILLIAMS: What is this barrier going to look like along portions of the Rio Grande?

DALE: So, it's going to be quite short. The first leg is six miles, so much shorter than the wall that Trump was talking about on the campaign trail. It's going to be on a levee, to the height of the existing levee, plus steel on top of concrete. So some people might still argue this is not Trump's wall because it's not his prototypes that he unveiled earlier in his term. I think it's going to look like a wall. It's going to be new barrier, so I think that's good enough for Trump to say at that point that he is building part of his wall.

WILLIAMS: What percentage do you think at the end of term one of the Trump presidency could be completed of his promise from sea to shining sea?

DALE (initially stammering): It, it's hard to see, to offer a precise number but I think it's clear at this point that at least at the end of this first term it's going to be quite small. Democrats are not willing to fund much of it. He's had to, you know, wring funding for some kind of fencing out of them and and so it's just not happening. 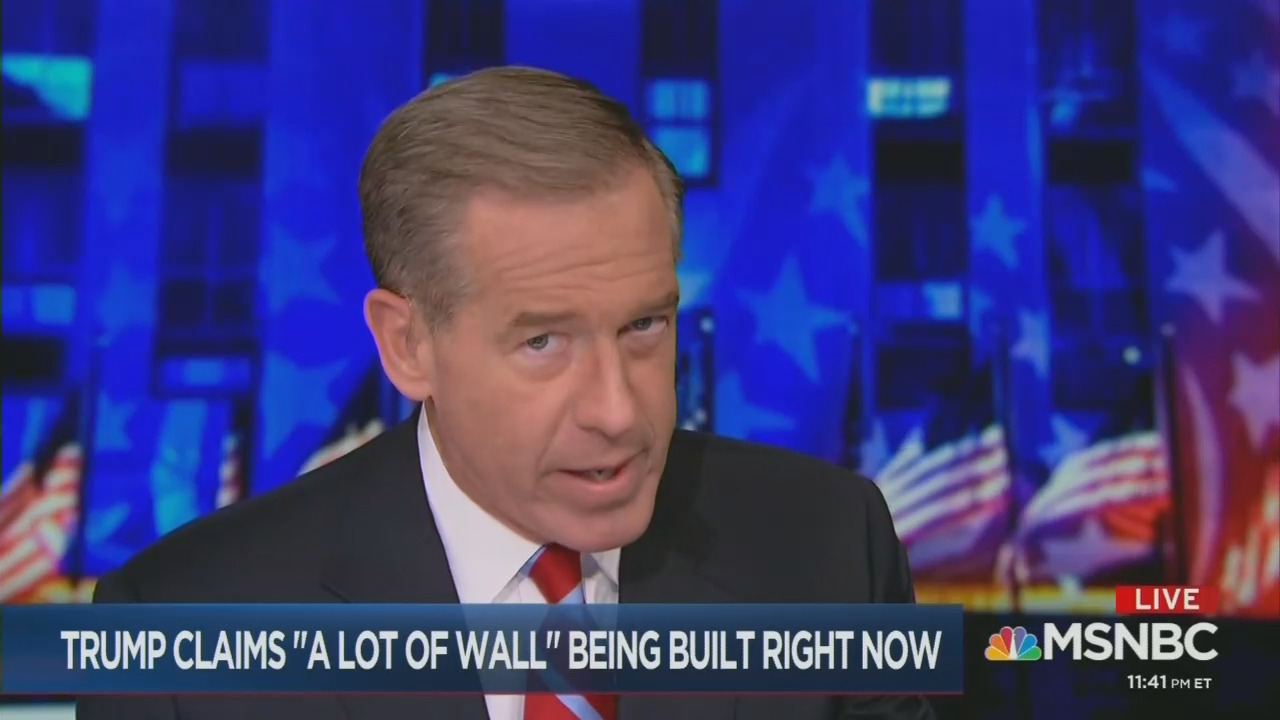 "It's just not happening" claims the journalist -- who only seconds earlier said "it's going to be new barrier." I'm not a linguist but that just might qualify as "happening."

As for Williams' shabby "sea to shining sea" claim, what a shock it isn't that he gets it backward. And the source for this is an otherwise critical Associated Press fact-check story about Trump with the president saying this --

These barriers are made of steel, have see-through visibility, which is very important. ... We do not need 2,000 miles of concrete wall from sea to shining sea. We never did. We never proposed that. We never wanted that, because we have barriers at the border where natural structures are as good as anything that we can build." (remarks Friday in Rose Garden).

To which the AP responded -- "THE FACTS: Actually, he did pledge a wall made of concrete along the southern border. It's true he did not say there needed to be 2,000 miles of it."

The AP further reported that "regarding the wall's length, Trump has noted as far back as 2015 that it need not run 2,000 miles, because natural barrier would account for some of the border distance. And former Homeland Security Secretary John Kelly told lawmakers in 2017 that it would not be "from sea to shining sea."

See how it works? Trump states repeatedly that the border wall with Mexico will not -- operative word here, not -- extend "from sea to shining sea," thereby providing an opening for pseudo-journalists such as Brian Williams to claim that he did, while a reporter praised by Williams as a fact-checker just manages to doze off as Williams spouts one of his signature grandiose untruths. But in fairness to Williams and Dale, this was not entirely lacking in entertainment value (Keep the laughs coming, guys!).

Their conversation was also notable for its conspicuous dearth of claims about the alleged uselessness of walls or physical barriers along borders, a hoary liberal trope losing traction by the day as border security improves and illegal immigration recedes.