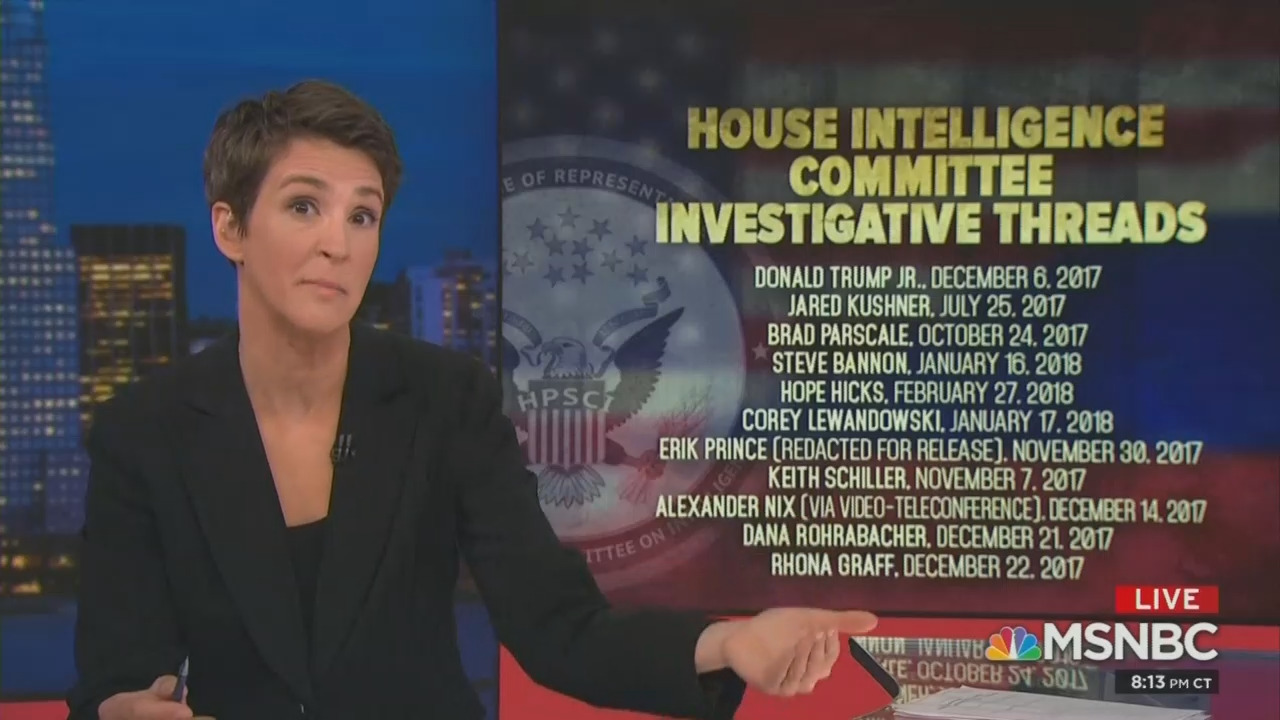 A question that frequently comes to mind while watching cable television coverage of investigations into alleged collusion between the Trump campaign and Russia -- if  they've got the goods on Trump, why is the coverage so often misleading if not outright dishonest?

Case in point -- MSNBC's Rachel Maddow breathlessly reporting this past Wednesday on the now-Democrat led House Intelligence Committee sending transcripts of witness testimony to special counsel Robert Mueller's office in the obvious hope that an ever-expanding fishing expedition to nail Trump might be the Democrats only hope for removing him from office before 2025.

MADDOW: Today in their first act the Intelligence Committee also voted to convey witness transcripts to the special counsel, to Robert Mueller. Mueller of course has already charged two people associated with the president for lying to Congress. Mueller has charged, federal prosecutors have charged the president's longtime political adviser Roger Stone. Also the president's longtime personal lawyer Michael Cohen. Federal prosecutors have also made reference to Sam Patten allegedly lying to Congress and the plea deal that Patten made over his funneling foreign money into the Trump inauguration.

Now we do not know if anybody else who has testified to the Intelligence Committee is likely to face the same kind of trouble in terms of potential felony charges, potential legal liability for having lied to Congress under oath ...

Important caveat -- so much so that Maddow will be repeating it, but not before she says this --

MADDOW: ... but this is a whole lot of transcripts that Mueller received today from the Intelligence Committee. These are a lot of witnesses that we're talking about here, including the president's eldest son and his son-in-law Jared Kushner and Trump campaign figures including Brad Parscale who's his new campaign manager and Steve Bannon who ran the Trump campaign after Paul Manafort, and Hope Hicks and Cory Lewandowski and Erik Prince of Blackwater fame, right? And Keith Schiller, the president's longtime bodyguard. Alexander Nix from Cambridge Analytica. Former Republican congressman Dana Rohrabacher. The president's longtime secretary from his business, Rhona Graff. I mean, lots and lots and lots of people. Transcripts amounting to thousands of pages.

Got that? Not just "lots" of people -- but "lots and lots and lots", thousands of 'em ... oops, sorry, those are pages of transcripts, not the number of people who testified, though an understandable mixup given Maddow's edge-of-seat reporting here.

The process described by Maddow in which Mueller "now has the ability" to charge others connected to Trump with lying to Congress requires two steps. And by Maddow's own admission -- she mentions this twice -- we don't know if any of the witnesses whose testimony was forwarded to Mueller have lied under oath. Alas for Maddow, this is the essential element needed for any witness to be charged by Mueller.

Without that, Mueller's "ability" to charge any of the witnesses with lying to Congress remains exactly the same as it was before he received those oh so many pages of transcripts, regardless of how much Maddow hyperventilates in response.