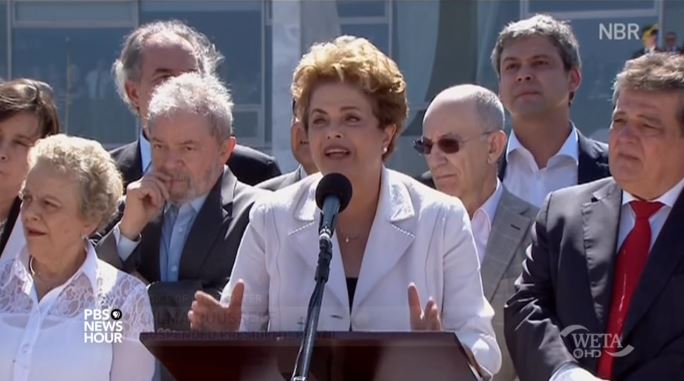 “Brazil Coup Complete,” claims the leftist Huffington Post. It reproduces a Reuters article about Brazil’s democratically elected Senate voting today to put the country’s corrupt leader on trial. But there is no coup. Rather, Brazil’s President, leftist Dilma Roussef, is being impeached for abuses of power:

Brazil’s Senate voted on Thursday to put leftist President Dilma Rousseff on trial in a historic decision brought on by a deep recession and a corruption scandal that will now confront her successor, Vice President Michel Temer.

With Rousseff to be suspended during the Senate trial for allegedly breaking budget rules, the centrist Temer will take the helm of a country that again finds itself mired in political and economic volatility . . . .The 55-22 vote ends more than 13 years of rule by the left-wing Workers Party [after] seeing many of its leaders tainted by corruption investigations.

But as the Cato Institute’s Juan Carlos Hidalgo notes, this impeachment is perfectly constitutional, and is not a coup:

The impeachment process and the crimes for which a president can be impeached in Brazil are clearly outlined in articles 85 and 86 of the Constitution. Moreover, the entire process has been overseen by the Supreme Court [most of whom] were appointed by Dilma and her Workers’ Party predecessor, Lula da Silva.

The “coup” claims are hypocritical, because no one in the media claims it is a “coup” when a right-wing president is impeached, only when that happens to a leftist. As Hidalgo notes,

Tellingly, when the Guatemalan Congress voted last year to strip right-wing President Otto Pérez Molina of his immunity, so he could be prosecuted for corruption charges, no one claimed it was a coup.

But to the Left, and their allies in the media, “anything that cuts short a [left-leaning] president’s tenure in office —even if it’s an impeachment process stipulated in the Constitution— is a coup. The same narrative was applied when left-wing President Fernando Lugo was impeached by Paraguay’s Congress in 2012.”

Never mind that Guatemala’s Molina did far less harm to his country than Brazil’s Roussef.  Guatemala’s economy continued to grow under his corrupt rule. By contrast, Brazil’s economy is shrinking, even as government spending and corruption have mushroomed, resulting in a staggering budget deficit of over 10% of GDP – a record — and massive unfunded pension obligations: “Brazil’s budget deficit increased to 10.4 percent of GDP in 2015 . . . hitting its highest level on record as the nation is experiencing its worst recession in decades.”

The media have similar double standards in covering the U.S. They responded with a yawn to IRS targeting of conservative and libertarian non-profits, falsely claiming that it was justified by the statutory language governing 501(c)(4) groups (debunked here). Some liberal journalists also falsely implied that liberal groups were singled out in a similar way (debunked here and here).

The IRS’s discrimination against non-liberal groups is nothing new, and has occurred under prior Democratic presidents (such as FDR, whose son says that he was likely the president who began the practice of using the IRS against a president’s political enemies).

Democratic President Kennedy’s use of “IRS agents” against his enemies was celebrated by liberal columnists like the Washington Post’s Dana Milbank. As the Cato Institute’s Gene Healy notes,

In a November 2011 column, the Washington Post’s Dana Milbank offered “A Machiavellian model for Obama” in Jack Kennedy’s “kneecapping” and “mob-style threats” against steel-company executives who’d dared to raise prices. . . . Milbank observed that “the price increase was rolled back” only after “subpoenas flew [and] FBI agents marched into steel executives’ offices”: “Sometimes, that’s how it must be. Can Obama understand that?”

By contrast, the press excoriated Republican President Richard Nixon, who tried but failed to get the IRS to audit his enemies.

The media have also largely ignored demands for censorship by the Justice and Education Departments in 2013 and 2016, when the Obama administration demanded that colleges adopt campus speech codes broader than those that had been previously struck down by judges. Education writer Joanne Jacobs wrote that the speech restrictions the Obama administration demanded at the University of Montana were so broad that they would effectively “make every student a sex harasser.”

When Obama took office, media organizations foolishly gave Obama transparency awards based on his rhetoric in favor of open government. But Obama soon proved far less transparent than Bush, especially in the Justice Department. In March 2014, the Associated Press reported that “more often than ever, the administration censored government files or outright denied access to them last year under the U.S. Freedom of Information Act.” Things got even worse in 2015. The Wall Street Journal concluded that this is “the least transparent administration.” New York Times editor Jill Abramson, a staunch liberal, admitted that the Obama administration is the most secretive ever.  The Huffington Post reported that the “White House denies more FOIA requests than ever” these days.

During the Obama administration, the liberal media have shown no interest at all in checks and balances on executive power, viewing constitutional challenges to Obama executive actions as borderline seditious. Perhaps they will be more willing to question authority if a Republican president is elected. Academia certainly will, given its left-leaning bent.

As the Cato Institute’s Walter Olson notes, one result “of a Trump presidency” might be that “mainstream law professors would develop a sudden, strange new respect for constitutional law concepts such as separation of powers and federalism, which tend to serve as checks on the power and ambition of the President and his backers.” He cites the prediction of liberal law professor Paul Horwitz, who writes that “a Trump presidency would be a goldmine for interest in and study of constitutional law,” and if he is elected, “there will be an immense rebirth of interest in the salutary aspects of federalism and separation of powers–on the ground, in popular conversation, and certainly in legal academic work.”