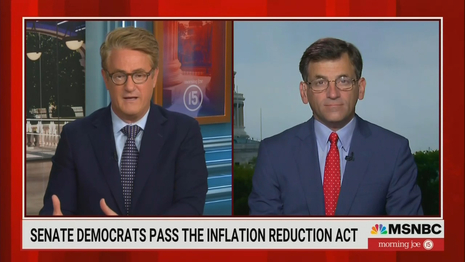 President Joe Biden’s sycophants in the press went all out this month, trying to save him and his party from midterm doom.

They spent most of August championing Biden’s “wins” as they hyped the passage of his big government legislation and even credited him with preventing World War III.

MSNBC’s Joe Scarborough compared him to Ronald Reagan. CNN’s Ryan Lizza exclaimed: “He is an enormously consequential president and just judging him by his legislative agenda….he’s sort of in that modern pantheon now.”

Here is a quick montage of the leftist press’s adulation of Biden’s “remarkable” run by NewsBusters’ media editor Bill D’Agostino:

The following are just a few of the most ridiculous acclamations of Biden made by liberal journalists over the past month:

Morning Joe Cheers on Old Joe: “Hell of a Run,” “All Moving In” His “Direction”

Co-host Joe Scarborough: “The last six years of Obama’s administration and Donald Trump’s time in the White House, Joe Biden has done more than them, not combined, two, three, four, five, six, seven times. This has been an extraordinarily successful two years, legislatively. Any way you cut it, even Republicans have to admit this privately, and they are. It’s been a hell of a run.”...
Co-host Mika Brzezinksi: “Pull out 20,000 feet, world stage, preventing a nuclear war, preventing World War III, check. COVID, he survived it, two bouts of it, never went to the hospital. COVID’s under control….It is all moving in Joe Biden’s direction. He’s got his aviators on, and he’s just getting it done.”
—MSNBC’s Morning Joe, August 8.

“LBJ also a creature of the Senate, something Joe Biden has been criticized for, but you look at this landmark legislation, then you stack on top of that Truman-esque efforts with NATO, the historic expansion of NATO, what he’s been doing with Ukraine, walking the finest of lines, preventing World War III, while taking the lead around the world in defending freedom in Ukraine and central and eastern Europe, and suddenly, you’re like, ‘well, maybe senators do know how to do this job.’”
— Co-host Joe Scarborough on MSNBC’s Morning Joe, August 8.

Co-host Joe Scarborough: “When you’re comparing it to other presidents, you can look at LBJ. You can look at Ronald Reagan. You can look at Bill Clinton….The list of accomplishments for Joe Biden and this Democratic Congress in a really divided climate just seem to keep growing.”...
New York Times Chief White House correspondent Peter Baker: “For much of Biden’s presidency, they look like the Bad News Bears who couldn’t….figure out how to get things done. In the last two weeks, they looked like the New York Yankees, right? They look like they know how to hit the ball.”...
MSNBC’s Way Too Early host Jonathan Lemiere: “On Build Back Better, on voting rights and other priorities. They seemingly couldn’t get it done. Now it has been a breathtaking reversal and remarkable run of success here, most of it while the President has been in COVID isolation….It caps off a remarkable run here from this President….It does rank up there with any modern president, the number of legislation done.”
— MSNBC’s Morning Joe, August 8.

Substitute host Gio Benitez: “We’re going to turn now to a big victory at the White House. President Biden is set to sign the massive health, climate and tax bill into law later today. Now this is the largest climate investment in U.S. history.”...
|Correspondent Cecilia Vega: “It’s such a big win for President Biden, he’s actually interrupting his vacation and flying back to White House today just for this bill signing….It is indeed a big one….The White House is calling this a once-in-a-generation investment….The White House is really planning to capitalize on this one.”
— ABC’s Good Morning America, August 16.

Inside the Beltway Mentality: Nevermind Inflation, Joe Is “On a Roll!”

“If you look at our new poll, I mean he’s getting credit for almost nothing, he’s on a roll, I mean there’s no question that Joe Biden is on a roll legislatively, on the national security front, but he’s getting no credit for it. And, look, inflation is still a factor. Gas prices are actually coming down and have been coming down for almost two months. The unemployment numbers are remarkable. Not only the unemployment numbers but wage growth continues to rise. It’s just not keeping pace with inflation.”
— ABC News chief Washington correspondent Jonathan Karl on ABC’s This Week, August 7.

“Inflation Reduction Act, great name. Now for all of those who say, ‘President Biden, what are you going to do about inflation?’ You’ve got it. Explain to us how it’s going to help the American people.”
— Host Stephanie Ruhle to Democratic Representative Katie Porter on MSNBC’s The 11th Hour, August 12.

Reagan-esque Biden Not “Getting a Whole Lot of Credit”

“We just saw the new investments in chip-making in the U.S. Early, big investments in the U.S. capacity to make vaccines….the infrastructure bill….More oil drilling, here! Making more vaccines, here! With a possible victory coming up, more clean energy, here! And possibly the biggest in history…..So far, President Biden doesn’t seem to be getting a whole lot of credit for this….When you add it up, it is a remarkable record….The Biden view is that he is, this is a payoff, a vindication, for playing the long game. So when that confidant said ‘We are Reagan,’ their extension of that was, we had a big plan, and it’s getting in place.”
— Axios co-founder and former New York Times and Washington Post reporter Mike Allen on MSNBC’s Way Too Early, August 1.

“For history, I think it’s a pretty big deal. You know, if you add up those seven pieces of legislation, it’s a $3.5 trillion agenda that Biden and the Democrats have passed since early last year. There’s really nothing like that in terms of that scale. You have to go back to – depending on how you define these things – to LBJ. So, I think for history, Biden – I don’t think there’s much debate anymore, he is an enormously consequential president and just judging him by his legislative agenda, you know, he’s sort of in that modern pantheon now.”
— Senior political analyst Ryan Lizza on CNN’s New Day, August 8.

“So, President Biden has been racking up wins, the American Recovery Act or COVID stimulus package, nearly $2 trillion. Infrastructure and Jobs Act, $550 billion, Chips and Science Act, $280 billion, and now what Democrats are calling the Inflation Reduction Act, which is expected to raise $700 billion in government revenue. Would you concede that President Biden is one of the most legislatively successful presidents in modern history?”
— Host Pamela Brown on CNN Newsroom, August 7.