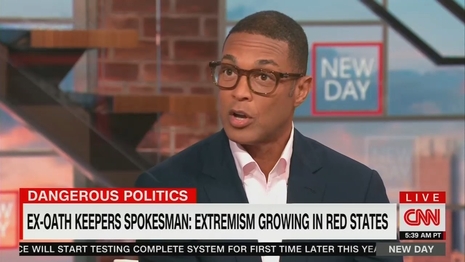 The month of July saw journalists hyperventilating over the Supreme Court’s abortion ruling (seen here) while also making excuses for President Joe Biden’s terrible record on the economy, as he’s struggled like the Biblical figure “Job” over problems that have “fallen upon his shoulders.”

As for Republicans, NBC’s Chuck Todd let Al Gore compare them to the cowardly Uvalde, Texas cops for GOP inaction on the climate. CNN host Don Lemon flat out admitted his bias as he claimed the GOP doesn’t deserve fair media coverage because they are “very dangerous to our society.”

Over in Hollyweird, filmmaker Rob Reiner demonstrated how out of touch with reality he is when he pronounced Biden “has a record of accomplishments in the first two years of his Presidency that has gone unmatched for almost 60 years.”

The following are just some of the most outrageous outbursts from lefty media-types over the last month:

Former Vice President Al Gore: “The climate deniers are really in some ways similar to all of those, almost 400 law enforcement officers in Uvalde, Texas who were waiting outside an unlocked door while the children were being massacred. They heard the screams. They heard the gunshots and nobody stepped forward….And confronted with this global emergency, what we’re doing with our inaction in failing to walk-through the door and stop the killing.”...
Moderator Chuck Todd: “Public sentiment on climate is certainly in some ways growing more urgent. And you have made notice that rank and file Republicans are growing more concerned about the climate. But, you know, public opinion is on one side on abortion. It’s on one side on guns. It’s on one side on climate. And yet you see it hasn’t mattered to some of the decisions that are made in our politics. How do you break through this?”
— NBC’s Meet the Press, July 24.

Host Chuck Todd: “I’m not going to let you go without asking you this: Australia’s election was a climate change election. And you talked about, ‘In order to get that political will.’ Jay Inslee tried to run a climate-focused campaign, and it didn’t get off the ground. Why not you, Al Gore?
Former Vice President Al Gore: “Why not me, as a candidate?”
Todd: “Leading a climate change presidential campaign in the future.”
Gore: “Oh, well, thank you for making the suggestion. You know, I’m a recovering politician. And the longer I go without a relapse, the less likely one becomes.”
— NBC’s Meet the Press, July 24.

Biblical-Like Struggles Have “Fallen Upon” Biden’s “Shoulders,” Give Democrats “Some Grace”

“Give the Democrats some grace. Governing is hard, especially when you have tiny margins.”
— Host John King on CNN’s Inside Politics, July 15.

“Joe Biden could literally change the last initial of his first name to ‘b,’ ‘Job’ Biden, given everything that has fallen upon his shoulders: inflation, a global war, global inflation.”
— Contributor Mike Barnicle on MSNBC’s Morning Joe, July 8.

C’mon Guys, U.S. Economy Is Not That Bad

“We’ve said it before, inflation is a global problem. And when you actually look at that U.S. versus other countries, it’s like we’re the best house on a bad street. But does that matter to voters? That sure it’s bad here but it’s worse elsewhere?”
— Host Stephanie Ruhle on MSNBC’s The 11th Hour, July 13.

The End of “Free and Fair Elections”

“Something they didn’t decide this week, the Supreme Court this week, but they did ominously announce, was, they will take on a case during the next year that may give the right to decide presidential elections much more strongly to state legislatures. There’s a possibility….that we may have seen our last fair and free presidential election in the United States.”
— MSNBC presidential historian on MSNBC’s The 11th Hour with Stephanie Ruhle, July 1.

“We must wonder, will this democracy survive? Well, a Yahoo News poll says, no. But, perhaps when you build a nation on stolen land, with stolen labor, it was never going to be a republic we could keep.”...
“We’re looking at these images [from the James Webb telescope]. I realize that these are billions of galaxies and stars that we’re seeing. And so it seems ridiculous that we would think we’re the only life here....And if there is somebody else, if you know about some secret planet that you’re trying to keep for yourself, and not tell us, why, let me know. Because we’re planning our escape route in this country right now, I tell you.”...
“I think a lot of the black soldiers who joined the Army, hoping that would gain them some respect in this country they were defending, found that white supremacy was more difficult to topple than Hitler’s army itself. And that’s the sad part that we’re still experiencing in this country.”
— Host Tiffany Cross on MSNBC’s The Cross Connection, July 16.

SCOTUS Turning Back the Clock on “Women’s Rights” and “Segregation?”

“We begin tonight with a look back at what has been one of the most consequential and life-changing Supreme Court terms since the courts that overturned segregation and expanded women’s rights. Only this Court has done it all in reverse. Today was the last day that we heard from them this term, and actually thank God, because in the past month the conservative majority has successfully weakened Miranda Rights, kneecapped state gun safety laws, betrayed indigenous sovereignty, begun to dismantle the separation of church and state, and curtailed women’s rights to privacy and liberty. And that was all before today, when in one of the Court’s final rulings this term the 6-3 conservative majority effectively gutted the EPA’s power to regulate greenhouse gas emissions from power plants that contribute to global warming.”
— Host Joy Reid on MSNBC’s The ReidOut, June 30.

Everybody Is Pro-Life, Even Those Who Want to Eliminate a “Clump of Cells”

“Nobody's pro-abortion, and, like, everyone is pro-life. It’s that some people decide to eliminate the life of the mother altogether. The viable existing human, we’re just not going to attend to, but the clump of cells — and we can all debate when that starts — is going to be defended at all costs.”
— Co-host Sara Haines on ABC’s The View, July 25.

“Screw politics. Screw poll numbers. Joe Biden has a record of accomplishments in the first two years of his Presidency that has gone unmatched for almost 60 years.”
— July 29 tweet by filmmaker Rob Reiner.