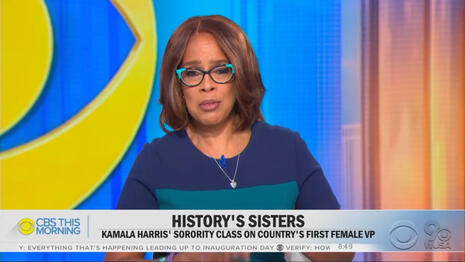 It was a challenging task but an esteemed panel of NewsBusters editors led by MRC President L.Brent Bozell and MRC’s Vice President for Research and Publications Brent Baker boiled down all the biased outbursts from lefty hack hosts, anchors, reporters and pundits in 2021 and presented The Chris Cuomo Memorial Award for Quote of the Year on December 15.

Of course, every year there is too much bias for just one category. So Vice President for Research and Publications Brent Baker led a panel of NewsBusters editors to break down the Worst of 2021 into seven additional categories (The Damn Those Conservatives Award; The GOP Wants To Bring Back Jim Crow Award; The Joy of Hate Award for Reid Rants; The Praising and Protecting Old Joe Award; The Media Heroes Award; The Craziest Analysis Award and the Celebrity Freak-Outs Award).

“She Eats No For Breakfast”

“There are so many people who are so proud of Kamala Harris. I love the interview she did yesterday with Jane Pauley on Sunday Morning. At one point she was running for student government and they were saying, ‘Not your time, not your time,’ and she says whenever people tell her no she ‘eats no for breakfast.’ I like that way of thinking, ‘She eats no for breakfast.’”
— CBS This Morning co-host Gayle King, January 18.

“Born For This Moment”

“Wednesday is also the day we start addressing Kamala Harris as ‘Madam Vice President,’ a change that’s the culmination of all she has worked for....It might seem that Kamala Harris was born for this moment in history.”
— CBS Sunday Morning host Jane Pauley profiling Harris, January 17.

“Being Alexandria Ocasio-Cortez means being a celebrity and looking like one, red lips and all. She was featured on the cover of Vanity Fair in 2020 and even shot this tutorial for Vogue on her beauty routine....You sometimes take heat for your celebrity status, for being glamorous....You embrace the power?...How do you use that power, the power of femininity, as you describe it?”
— Host Dana Bash on CNN’s Being...AOC, August 9.

Host Brianna Keilar: “Congresswoman Alexandria Ocasio-Cortez attended the Met Gala last night, and this may be the dress that is the most remembered from it. On the back of this dress it says ‘Tax The Rich.’...[This] is one of the most expensive and elitist events of the year, and I wonder if you think she thread the needle here with her message and her presence there or not?”
New York Times correspondent/CNN analyst Maggie Haberman: “I think she did….She is hobnobbing with the wealthy. The message of that dress is not a popular message in that crowd. And so there is something risky about doing it.”....
CNN White House correspondent John Harwood: “It’s the opposite of hobnobbing with the wealthy. And it shows the talent that AOC has.”
— CNN New Day, September 14.

Co-host Dana Jacobson: “Ed, quickly before we let you go, when we look at the Governor’s [Andrew Cuomo] legacy — and it is tied to this — it’s also the things that he did. How will people remember his time in office?”
Correspondent Ed O’Keefe: “There were a lot of things. Obviously the pandemic. You talk to people in Albany or across the state they say he did a masterful job keeping the state safe.”
— CBS This Morning, August 11. Fox’s Janice Dean noted former New York Governor Andrew Cuomo’s policy of sending COVID patients into nursing homes resulted in thousands of deaths.