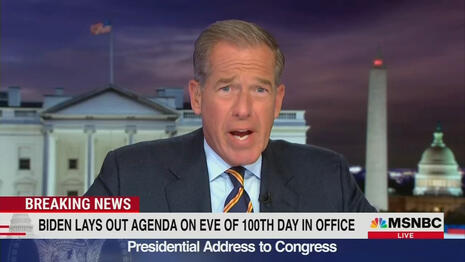 After President Joe Biden delivered his first address to Congress, liberal journalists polished-up his performance, praising him as a “non-threatening” “progressive.” They also pitied him as they whined COVID had robbed him of the usual “majesty and pomp” granted to past presidential addresses.

The opposition to Biden was reviled. Florida Governor Ron DeSantis was called a “modern-day George Wallace.” The GOP was painted as a party in favor of “domestic terrorists, racism, and the perpetuation of white supremacy.”

This was all in addition to the sliming of Republican Senator Tim Scott as a “token” and accusing Georgia Republicans of bringing back “Jim Crow.”

The following are just some of the most obnoxious outbursts from lefty journalists and celebs from the last month:

“Something to think about when we do see Joe Biden come down this aisle, again, 36-year veteran of the Senate. But so far, because of the pandemic, and he has never used terms of  victimization, he has been robbed of so much of the majesty and pomp of the job. Campaign stops. Convention speech. After he won, giving his acceptance in a parking lot in Wilmington. An inaugural address before an empty mall in Washington D.C.”
— Host Brian Williams during MSNBC’s live coverage of President Joe Biden’s first address to Congress, April 28.

Host Chris Hayes: “Because Joe Biden is practiced in speaking in ways that sound non-threatening he could lay out this incredibly ambitious agenda, a progressive agenda that would bring America in line with other developed democracies in terms of the capacity and scope of its social safety net and he could do it in a way that sounded as American as apple pie.”...
NBC News National Political Reporter Sahil Kapur: “While President Obama had this knack for making moderate programs like the Affordable Care Act sound exciting and revolutionary. Biden’s superpower is the exact opposite. He makes massive multi-trillion dollar FDR size liberal policy sound moderate and middle of the road, just by the way he talks about them.”
— MSNBC Presidential Address to Congress: Address Analysis With Chris Hayes, April 29.

CNN Trying Too Hard to Avoid Using the Word “Liberal”

“President Biden to showcase his moderate radicalism in his big congressional address.”
— April 28 tweet from one of CNN’s official twitter accounts @CNNPolitics.

“Republican state legislatures across the country are responding to the demonstrations over George Floyd’s murder with punitive new measures intended to discourage protests altogether. In the 2021 legislative session, lawmakers in 34 states have introduced more than 80 anti-protest bills, the vast majority of them drafted by Republicans….This is directed at Black Lives Matter. It feels so George Wallace that I’m shocked that George Wallace didn’t actually think of it back when he was governor of Alabama….[Florida Governor] Ron DeSantis appears to really want to reenact the entire George Wallace history. I guess he wants to be the modern-day George Wallace, because he is enacting a slew of laws that essentially try to make it illegal to protest in the state of Florida.”
— Host Joy Reid on MSNBC’s The ReidOut, April 22.

“We are not going to be able to hold the enterprise that is America together as long as one of the two major parties in this country, one, doesn’t govern, and, two, gives voice to and gives cover for domestic terrorists, racism, and the perpetuation of white supremacy. We will not survive if that is the way the Republican Party will remain.”
— Washington Post columnist/MSNBC host/PBS contributor Jonathan Capehart on PBS NewsHour, April 23.

“I do recommend people read this book What’s the Matter with White People because it goes through the fact that the New Deal and the things that a lot of white, working class people used to cherish, they now hate because they just associate it with black people and they say that the things that saves their own families throughout the 1940s and ’50s are all now welfare and they’re all bad because diverse people get access to them….That’s why Fox News is in the outrage business because they’re just, like, mad at people who aren’t white Christians.”
— Host Joy Reid on MSNBC’s The ReidOut, April 27.

Fox News Is “Danger to Democracy”

“Since Donald Trump, it [Fox News] has completely become a tool of propaganda. We shouldn’t even treat it like the press anymore. They have news in their title which is to mock the name of news. We have to call them out when they do this because we see how incredibly destructive this is to democracy. There is no doubt, Rupert Murdoch and Fox News are now a danger to democracy and they should be treated that way. If they won’t do it in the federal government challenging licenses or any way that they can do it there regulation, we have to keep doing it in the press. We have to keep pounding away at it.”
— Baltimore Sun media critic David Zurawik on CNN’s Reliable Sources, April 25.

“We can’t stay anywhere forever especially when we’ve got home security threats in terms of violent white nationalism that’s threatening our Capitol, when we’ve got our own former President inciting people into violence and pushing them into this violent, white extremism, much the way bin Laden, you know, did, sort of inspiring people to be this way.”
— Host Joy Reid on MSNBC’s The ReidOut, April 14.

Tough Coverage: Is Nancy Pelosi One of the Greats or The All-Time Greatest?

“You can say Speaker of the House Nancy Pelosi has been in the spotlight since the day she was born. Her birth front page news in Baltimore where her father was a congressman at the time. Pelosi’s political education and evolution into the most powerful women in American political history is the subject of a new biography. Madam Speaker: Nancy Pelosi and the Lessons of Power is by Susan Page who joins us now. Susan, good morning to you, ‘the most powerful woman in American political history.’ I think you can drop ‘political’ and say ‘most powerful woman in American history.’”
— Co-host Tony Dokoupil on CBS This Morning, April 20.

You Must Praise Pelosi, To Do Less Is “Sexist”

“I want to ask you about House Speaker Nancy Pelosi. You actually have some good things to say about her. You compliment her toughness — you say she may turn out to be the most powerful Speaker in history. But my question is: Republicans have raised a lot of money demonizing her. Is that sexist?”
— Anchor Judy Woodruff to former Speaker of the House John Boehner on PBS NewsHour, April 15.

“Shootings, gun laws, access to weapons. Oh, I know when they’ll change. Your kids start getting killed, white people’s kids start getting killed. Smoking that doobie that’s actually legal probably in your state now, but they don’t know what it was and the kid runs and then pop, pop, pop, pop! The cop was justified. ‘Why did you run?’ Oh, he had a baseball game tonight. Oh, white kid, big family, that house over there? Those start piling up. ‘What is going on with these police?’ ‘Maybe we shouldn’t even have police.’ That kind of mania, that kind of madness, that will be you. That will be the majority, because it’s your people.”
— Host Chris Cuomo on CNN’s Cuomo Prime Time, April 16.

Time to Abolish the Police

“This is something that you can’t reform. This is something that you can’t train people out of. Police departments need to be abolished in significant ways and rebuilt. I know that sounds like a radical idea, but I’m sick and tired of video after video of video of murdered black people, and the President of the United States talking about looting before he talks about endemic violence by the state.”
— MSNBC contributor Jason Johnson on MSNBC’s The 11th Hour with Brian Williams, April 12.

Is Our Climate Propaganda Hysterical Enough for You?

“You and I talked after you testified [before Congress] back in 2019....You said, ‘Thank you for finally listening to us.’ Do you think we’re doing a bit better, the media? Are we any better than we were a few years ago in at least sounding the alarm and raising awareness?”
— Host Craig Melvin to environmental activist and Zero Hour co-founder Jamie Margolin as aired on NBC’s Today, April 22.

“I’ve been reading John Boehner’s book. And he says in his book that the crazies have taken over. I think the Republican party is sort of this — you know — extremist, anti-scientist, nativist, embracing white supremacist, insurrectionist party at this point.”
— Co-host Sunny Hostin on ABC’s The View, April 8.

Republicans Want to Fellate the Founders and “Rape Democracy”

“If your biggest idea — your biggest problem — is that there is too much democracy, and so, ‘There’s too much voting — we’ve got to crack down on that — too much speech and protest and we’ve got to crack down on that —  too much access to information, let’s crack down on that.’...What a punch in the gut. And for a party — the Republican party — that makes pornography of patriotism and practically fellates the Founding Fathers — it is jarring and disorientating to watch them attack America this way….This is what it looks like when you’d rather rape democracy than come up with your own ideas.”
— Host of CNN’s S.E. Cupp: Unfiltered on HBO’s Real Time, April 23.

“Trope” of the “Liberal Media” Was Fueled By Racism

“I think it’s also really important that we maybe not fall into the terms that our opponents have set. You know the Right since The New Deal….have been calling Democrats arrogant. Arrogant! Because we let workers speak up to bosses and have a say in how their workplaces should run. Right? They started the trope of the liberal media in the time of the Civil Rights movement to discredit northern reporters who were coming down and telling the truth about the South. That’s when they started saying ‘Don’t trust the liberal media.’”
— Historian/author Nancy MacLean on HBO’s Real Time with Bill Maher, April 30.

Fossil Fuel Industry Like an Abusive Boyfriend, Deadlier Than COVID

“American taxpayers give money to the fossil fuel industry. You know, that’s kind of like dating a guy who beats you up, but you keep going out with him and giving him what he wants, you know? I mean, just think about this. Almost 3 million people have died from COVID over the last 15 months. Over the same time frame, three times as many people, 8.7 million people, have died because of fossil fuel-related air pollution. And we give $20 billion a year to these guys? They are bad guys.”
— Actress/activist Jane Fonda on NBC’s Tonight Show Starring Jimmy Fallon, April 20.

“Proud” of a President Who Actually “Cares About” Us

“How proud are we to have a President who cares about all of US?”
— April 28 tweet about President Joe Biden’s first address to Congress, by film director Rob Reiner.