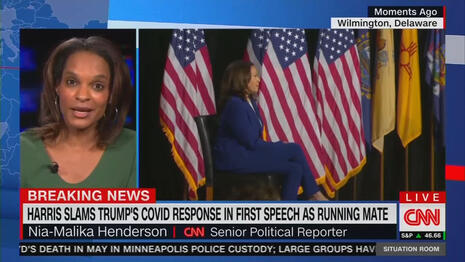 Kamala Harris’s path to the DNC stage to accept the VP nomination tonight was paved with plaudits and rose petals from the liberal press for the Democratic “Dream Team.”

Joe Biden’s selection of the California senator was hyped as “Hope Reborn” and a “terrific” choice that will make Vice President Mike Pence nervous about his upcoming debate. Liberal journalists were also confident that Harris would ultimately overcome the  “kitchen sink” of “racism and sexism” that would be hurled at her by Donald Trump.

The reception Harris has received so far, is in sharp contrast to the hatred heaped on Vice President Mike Pence in 2016.

The following is a top 11 countdown of the celebratory takes from the liberal media since Harris was tabbed to be Biden’s running mate:

11. Why Is “Obama-equse” Kamala Such a “Terrific” and “Conservative” Choice?

Co-host Anthony Mason: “Why, as you say, would she make a terrific Vice President?”...

Co-host Michelle Miller: “She seems so Obama-esque. She checks so many boxes of representation. Does she galvanize an energy that looks or feels similar to you?”...

Mason: “What does it say to you about the state of the Democratic Party that the daughter of immigrants from Jamaica and from India was kind of the conservative choice here?”

10. “A Defining Moment In History”

“Each moment in history has its significance, but this is a defining moment in history. This is something that the history books will chronicle, and people will look at this moment to see how to navigate for the future....She’s someone who doesn’t take tea for the fever. She can fight anyone at any moment. She can knock down the hardest or the staunchest person who is against the Biden-Harris ticket or against the American public because she is standing next to Joe Biden saying she’s part in trying to make this ‘We the People’ who are still trying to form a more perfect union, go. She sees that this is a moment that we are in the midst of what is growing pains, and she wants to pull it out. She wants to stand behind and with Joe Biden to fulfill what this nation needs...This is a historic time. We cannot compare it to Obama-Biden. We cannot compare it to Clinton-Gore. This moment stands for itself.”

9. Harris Has the Skills to Purge Trump’s White Nationalists From Government

“Somebody’s got to go through and find all of these incompetent, unqualified, corrupt, white nationalist-supporting people that Trump has burrowed into our State Department, burrowed into our Justice Department, and I think Senator Harris would be fantastic at finding those people and removing them. Because she will have the skill set to not only get rid of the officials and the bureaucrats, she can help us impeach some of these judges, these underqualified judges that Donald Trump has managed to push in.”

8. Will Biden-Harris Be Able to Overcome the “Racism and Sexism?”

“Hillary Clinton was very blunt, saying that she feels that sexism was one of the contributors to her loss in 2016. Do you worry about racism and sexism affecting this race with Kamala Harris on the ticket?”

7. Harris Punches Through the Zoom!

“There was a relaxed quality to her….The President….called her ‘nasty’ already. There was nothing nasty at all the way she delivered some very cutting lines….The intimacy of this kind of campaigning, it’s really unlike anything we have seen and it is something that I do think plays to a strength….that she has just in the box of the television, the box of an online Zoom call or….whatever the medium is. There is an intimacy to it that she does, I don’t know if it’s a generational thing, but she is able to punch through and yet do it in a way that is very seeming relaxed and conversational.”

6. Trump Will Throw the “Kitchen Sink” of “Racism and Sexism” at Harris

“If you think about what he [Donald Trump] just said, he was really fixated on Kamala Harris being nasty. She’s so mean. He often uses that kind of language to refer to women….They’re going to throw the kitchen sink at Kamala Harris, at this ticket. It will be laced with racism and sexism in the way we’ve come to see this President and understand this President over the last many years and we’ll see if it works.”

5. Harris “Nailed It,” Giving “A Fantastic Speech” for “One of” Her “Finest Performances”

“I thought Kamala Harris gave a fantastic speech. She absolutely nailed it. I think this is one of the finest performances I’ve seen her deliver in terms of a speech. She has tremendous range as a speaker. There are times when she’s incredibly warm and funny and light. She’s talking about spending time with her nieces and her step-kids, being called ‘Mamala,’ cooking dinner.”

4. Mike Pence Is Shaking in His Boots

“She’s so impressive. The clips you ran a little while ago of her work in which she did share a committee — the way she could prosecute people like William Barr and Jeff Sessions and, you know, these are tough birds that she’s able to really put on the hot seat. I would be very fearful of her. I imagine that if you’re Mike Pence right now recognizing that this is who you’re going to have to debate on issues of substance. I have a feeling she’ll make mincemeat of him….It’s going to be a disaster for the Trump team because she is, in my mind, the finest prosecutor I’ve ever seen in my life of watching politics and Washington lawmakers. She’s just unbelievably smart, articulate, and good.”

3.  Going “Wild” For Candidate Who “Cares About Equality Deep Within Her Soul”

“I had her at the ‘Know Your Value’ San Francisco event. The crowd went wild. And she really connected with the women in the audience….She cares about women’s issues. She cares about equality deep within her soul, from her own experience. We’ve had a great time knowing her so far, and it’s kind of exciting, this pick.”

“It was a beautiful speech. Both of them, they strengthen each other….They’re both steadier together. They’re both stronger together. That was such a beautiful thing to see. I think if you’re going to give a headline today it would be ‘Hope Reborn.’ That’s what I felt. Hope reborn. You just haven’t heard people talking that way about the country and cutting through and seeming authentic...They blew me away. Both of them were stronger today than I’ve seen them in a very long time, if ever.”

1. Trump Living in Fear of Kamala

“Every single day, every single night of his life, Donald Trump lives in fear of prosecutors. And today Donald Trump got a new prosecutor on his case, the former District Attorney of San Francisco, the former Attorney General of the state of California, and the current Senator and candidate for Vice President of the United States, Kamala Harris.”

“Smart” Americans Are Ready for “Dream Team” of Joe and Kamala

Corden: “Joe Biden has chosen Kamala Harris. What are your thoughts on this?”

Curtis: “Fantastic news, the best choice! We need leadership and we need leadership that people already know….And Joe Biden and Kamala Harris are a dream team!...I think America is smart and I think we know what we need and we’re gonna go get it.”

Let’s Hear It for Superhero Harris

“A lot of kids play with Marvel characters and Barbies and you know, that’s fine. My kid, she plays with superheroes. Hello, Madam Vice President.”

— Actress Jessica Chastain holding up an action figure of Kamala Harris in a video posted to her official Twitter account, August 11.