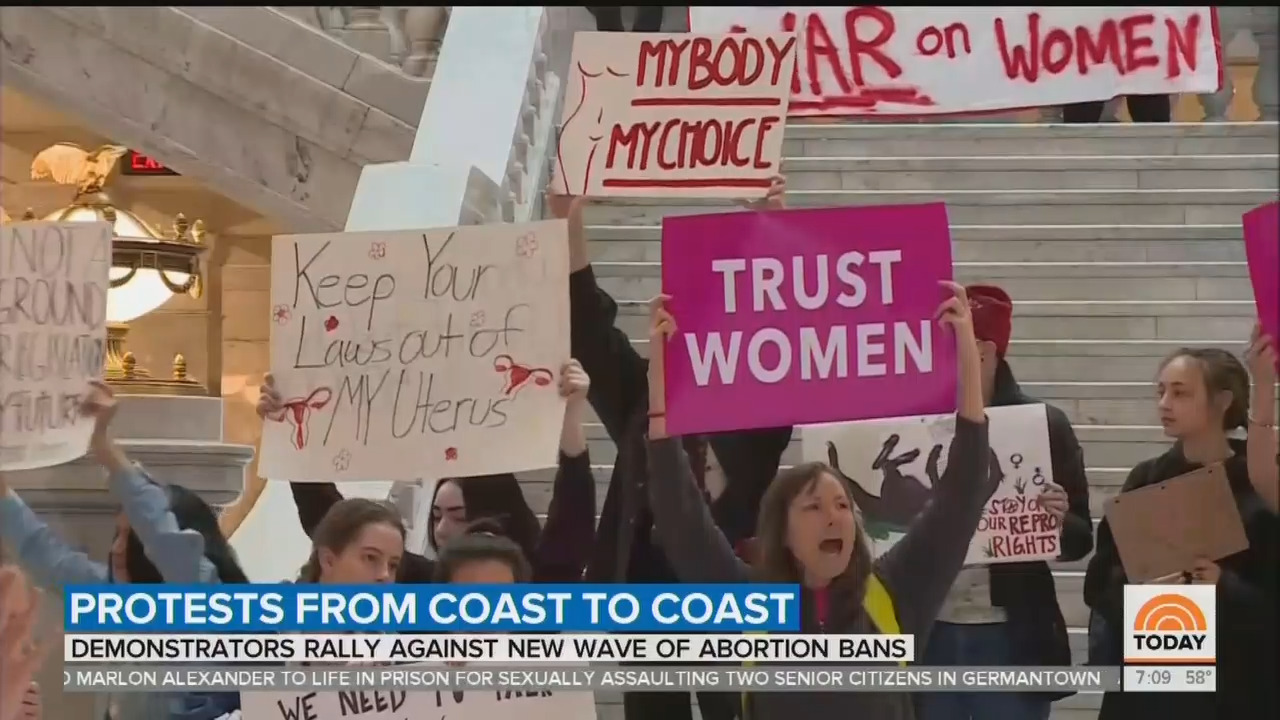 The same network anchors and reporters that refused to cover New York’s radical late term abortion law back in January have (in just the last 15 days) flooded their evening and morning shows with over two-hours of hostile coverage of pro-life laws in Alabama, Georgia and Missouri.

From the morning of May 7 (when Georgia Governor Brian Kemp signed the Life Act into law) through the morning of May 22 (the day after protests against pro-life legislation), the Big Three networks filled their evening and morning shows with 2 hours, 21 minutes of coverage often including loaded language depicting these new pro-life laws as “extreme” and “restrictive” attacks on women’s rights – as opposed to “protective” of the rights of the unborn.

The media’s reaction to new pro-life laws has been much more furious. On the May 21 edition of NBC Nightly News correspondent Stephanie Gosk touted “Hundreds of protesters were joined by Democrats, looking for votes in 2020. Demonstrations organized in cities nationwide, triggered after a wave of restrictive abortion laws passed in multiple states.”

On the May 20 Today show Gosk – after a soundbite from Bernie Sanders warning that the new laws were “dangerous” – ran a clip of pro-abortion protester complaining: “I don’t think this is an argument over life not being precious, but at this point you’re putting a clump of cells over a fully developed person.” The reference to a human life as a “clump of cells” was not considered “extreme” by NBC.

That “extreme” label was attached throughout the coverage of the Alabama, Georgia and Missouri laws. Correspondent David Wright on the May 19 ABC’s World News Tonight claimed “these new state laws are for extreme restrictions on abortion...will energize voters on the [Democratic] side.”

On the May 13 edition of CBS This Morning correspondent Jan Crawford hyped: “These state laws are just coming too fast and they are too extreme.” And then tried to assure her liberal viewers on the May 20 CBS This Morning. “[The Alabama law] probably won’t even get [to the Supreme Court] because it’s so extreme.” On the May 15 edition of CBS This Morning, correspondent Jericka Duncan worried the Alabama bill would “disproportionately” “endanger” minority women who lack access to health care. She also sat down with an abortion activist who ran one of the state’s abortion clinics. Her shirt read, “Everyone loves someone who had an abortion.”

While reporters like NBC correspondent Pete Williams, on the May 16 Today show, were decrying the Alabama bill as a “blunt force attack on Roe v. Wade” they never labeled any of the new laws as an attempt to protect the rights of the unborn.

However, they did use the word “protect” when it came to discussing state efforts to preserve “abortion rights.”

Correspondent Mary Bruce on the May 17 ABC World News Tonight touted: “Many of the [Democratic] candidates are now looking beyond the courts to try and protect abortion rights. Elizabeth Warren today, became the latest candidate to call for legislation to try and pre-empt states from restricting access to abortion.”

Substitute host Craig Melvin on NBC’s May 22 Today show asked correspondent Stephanie Gosk: “Steph, a lot of the attention so far has been paid to these states introducing anti-abortion restrictions. What if anything, are other states doing to protect abortion rights?”

Gosk was also posed that question on the May 16 NBC Nightly News. Following a report about the “sweeping challenge to abortion rights in this country” that was “picking up traction,” anchor Lester Holt looked for some good news from Gosk. “What do we know specifically about these states that are trying to move and protect abortion rights?” Gosk championed the State of New York which “has already passed a law that protects abortion in the third trimester under certain circumstances.” What Gosk failed to mention was that the law even allowed abortions on what would be the baby’s birthday.