NB Year in Review: Media Swooning Over Their Liberal Heroes 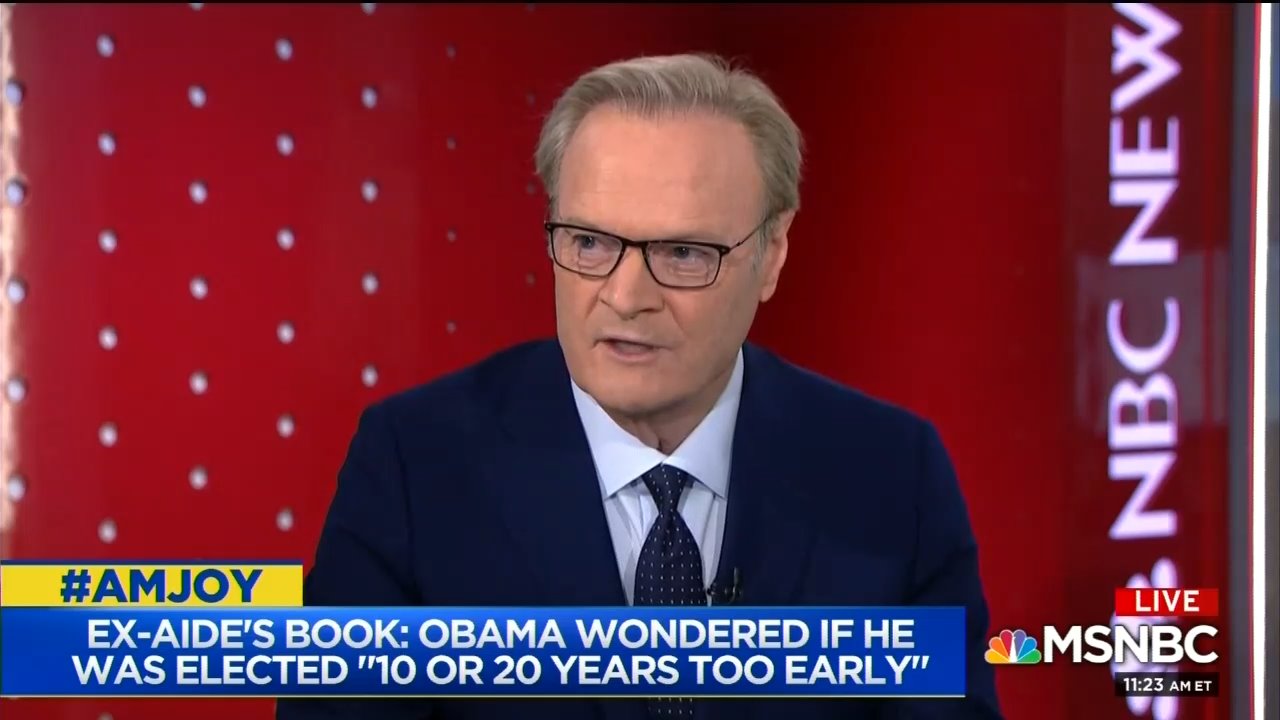 As 2018 comes to a close, NewsBusters is recounting the most obnoxious liberal bias of the year. In today’s installment, we have the most outrageous examples of journalists fawning over liberal or left-wing icons. Examples include MSNBC’s Lawrence O’Donnell gushing over Barack Obama: “His mind is too supple, too complex, too rich compared to my own.”

The media also swooned over Beto O’Rourke, as they compared the Texas Senate Democratic loser to Abraham Lincoln. The New York Times’s Frank Bruni fell in love with the “peppy, rangy, toothy progressive.”

There was also praise for Nancy Pelosi as CNN proclaimed her the “original Badass Woman of Washington.” There was even a presidential push for Oprah Winfrey, but CNN’s Van Jones wondered if she would “want to be demoted from Queen of the Universe to President of the United States?”

In upcoming days, we’ll be showcasing the most horrendous anti-conservative quotes of the year, the worst freak-outs over Donald Trump, the most idiotic analysis of the year, and the most obnoxious celebrity quotes of 2018.

“When I hear a statement like that –  read a statement like that from Barack Obama  – who is, as we’ve said, an introspective and thoughtful and very wise man – and a brilliant writer. And he says something like ‘maybe I came along 20 years too soon,’ my reaction to that is: What do you mean? Which is to say, I cannot possibly fill in the paragraph that, that is the first sentence of, if it is spoken by Barack Obama because his mind is too supple, too complex, too rich compared to my own to fill out what the rest of that thought is.”
— MSNBC’s The Last Word host Lawrence O’Donnell on MSNBC’s AM Joy, June 2.

Princeton Professor/MSNBC contributor Eddie Glaude: “And so, Jon Meacham says he may be the savior of the republic, it’s really interesting.”

Host Stephanie Ruhle: “I am intrigued, I’m excited, I’m scared, I’m a little grossed out. And you know what? I owe Michael Avenatti an apology. For the last few weeks, I’ve been saying, ‘Enough, already, Michael, I’ve seen you everywhere. What do you have left to say?’ I was wrong, brother. You have a lot to say. The Democrats could learn something from you. You are messing with Trump a lot more than they are.”
— MSNBC Live, May 9.

Host Chris Cuomo: “Two sides enter but only one can leave, with a win anyway. Now, the President on one side, the President of the United States, the master of message and in-your-face fictions and on the other, his new foe, the “Nanchuck”! I like it because it sounds like, you know, the martial arts. Nancy Pelosi and Chuck Schumer, they were wearing smiles and a bunch of new power. They were ready to give the man [Donald Trump] some of his own medicine.”...
Host Don Lemon: “You were talking about the name that we came up with and it was ‘Nan-Chuck’.”...
Cuomo: “Nanchuck is great because it's like what Bruce Lee would do with those things what happened in that room.”...
Lemon: “I was like, ‘oh, my gosh, Nancy Pelosi is a boss!’ I mean she handled herself amazingly....I’m sure Democrats are going all across the country tonight, ‘thank God for Nancy Pelosi!’”
— Discussion about Donald Trump-Chuck Schumer-Nancy Pelosi meeting as aired on CNN Tonight, December 11.

“There was a lot of shade thrown, but when Nancy Pelosi put on shades for exactly five seconds, that became the moment her fans immortalized. ‘Pelosi like a rock star.’ ‘That look when you just got finished manhandling a man baby.’ ‘The new power suit for women, red coat, sunglasses, nerves of steel.’ For a politician who almost saw her position as House speaker to be blown up, it must be sweet to be compared to the cool dude in CSI: Miami.”
— Correspondent Jeanne Moos discussing Donald Trump-Schumer-Pelosi meeting as aired on CNN’s Erin Burnett OutFront, December 12.

“Pelosi is one of the most consequential political figures of her generation. It was her creativity, stamina and willpower that drove the defining Democratic accomplishments of the past decade....Since Donald Trump’s election, American women have poured into the streets, signed up to run for office in record numbers and surged to the polls. Many of them look a lot like Pelosi once did. They are brainy, liberal and comfortably situated moms who have looked at the political system with the exasperation of a person who has seen her husband get the laundry wrong and realized that she’s going to have to do it herself.”
— Writer Molly Ball in the September 6 cover story for Time magazine “Nancy Pelosi Doesn’t Care What You Think of Her. And She Isn’t Going Anywhere.”

“Let me finish tonight with a strong suggestion. It’s that Beto O’Rourke should run for president. I got a good look at Beto’s race for Senate when we hosted the Hardball College Tour at the University of Houston. There was magic in that room.”
— Host Chris Matthews on MSNBC’s Hardball, December 5.

“[Texas Democratic Senate candidate Beto] O’Rourke offers not just a path to victory in Texas but an antidote to the entire stupid artifice of American politics in the Trump era. He’s authentic, full of energy, and stripped of consultant-driven sterility. On what planet is Beto O’Rourke not a presidential contender, even if he loses?
— Vanity Fair writer Peter Hamby in an August 29 online profile of Texas Senate Democratic candidate Beto O’Rourke.

“Count me among the swelling ranks of the infatuated. I, too, have been Beto-struck. I have seen the alternative to Ted Cruz – Lord knows we need an alternative to Ted Cruz – and he’s a peppy, rangy, toothy progressive with ratios of folksiness to urbanity and irreverence to earnestness that might well have been cooked up in some political laboratory....Many of his campaign events are mobbed. People line up for selfies and then insist on hugs...He talks about fried catfish one second, James Joyce the next. (The older of his two sons is named Ulysses.) He’s fluent in classic punk rock and contemporary country. He’s fluent in Spanish, too.”
— Columnist Frank Bruni in an April 7 New York Times article “Watch Out, Ted Cruz. Beto Is Coming.”

“Like Lincoln, O’Rourke is charismatic, tall, lanky, filled with energy, an accomplished public speaker and a natural campaigner. Like Lincoln, O’Rourke is a can-do underdog with an ability to command an audience and energize an army of followers. And finally—just like Lincoln—O’Rourke would begin his quest for the presidency (he says he’s not a candidate, but who believes that), following a Senate campaign that he actually lost.”
— Writer Mark Perry in the December 1 Politico article “Beto Has a Path to the Presidency: Lincoln’s.”

“Does she [Oprah Winfrey] want to be demoted from queen of the universe to President of the United States? That’s the only question. If she wants to do it, she can do it. She is probably the most beloved human being on Earth. She is probably the most beloved carbon-based life form on Earth. If she runs, she will destroy anybody in front of her.”
— Political commentator Van Jones on CNN’s Anderson Cooper 360, January 8.

“If ‘diplomatic dance’ were an event at the Winter Olympics, Kim Jong-un’s younger sister would be favored to win gold....With a smile, a handshake and a warm message in South Korea’s presidential guest book, Kim Yo-jong has struck a chord with the public just one day into the Pyeongchang Games....Seen by some as her brother’s answer to American first daughter Ivanka Trump, Kim, 30, is not only a powerful member of Kim Jong-un’s kitchen cabinet but also a foil to the perception of North Korea as antiquated and militaristic...It also is a signal that North Korea is not this crazy, weird former Cold War state but it too has young women that are capable and are the future leadership.”
— Joe Sterling, Sheena McKenzie and Brian Todd in February 10 CNN.com article headlined “Kim Jong-un’s sister is stealing the show at the Winter Olympics.”