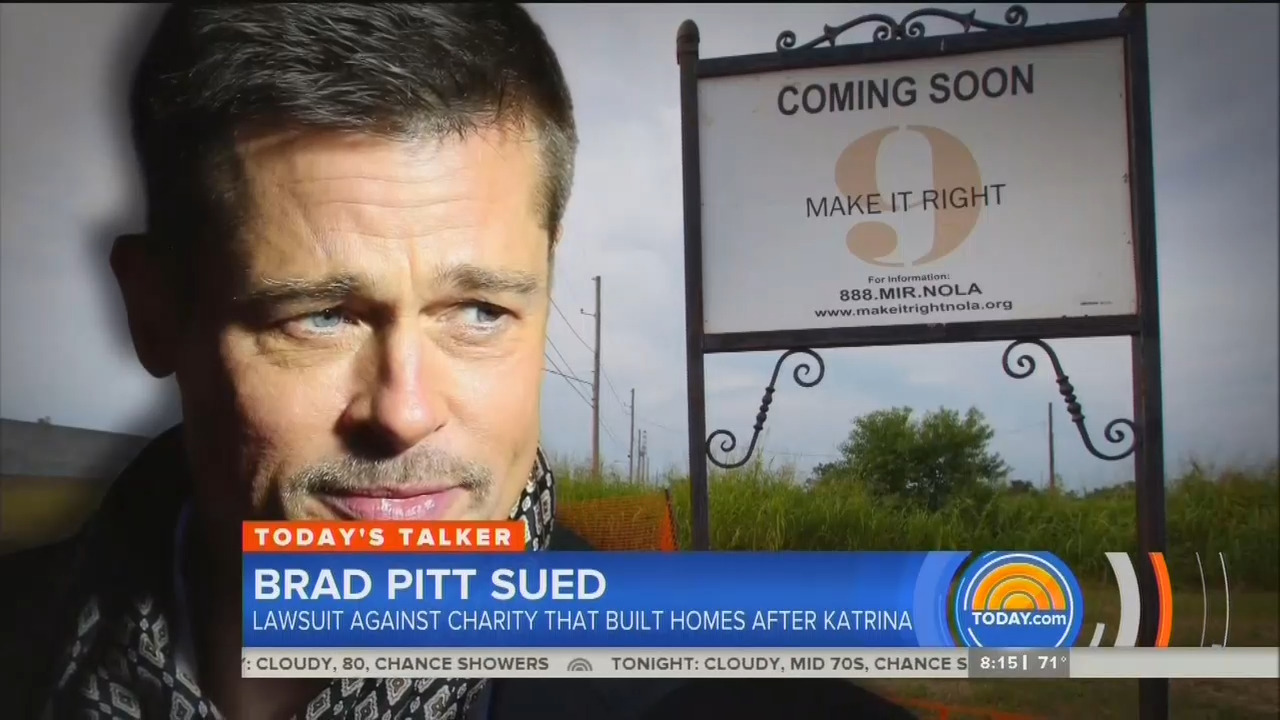 In 2006 Brad Pitt came to the rescue of New Orleans residents with his plan to build affordable homes for those displaced by Hurricane Katrina. There was just one problem. His liberal obsession to fight climate change – by using “cheap recycled materials” – means those homes are now falling apart.

On Monday’s Today show NBC correspondent Stephanie Gosk reported that Pitt and his charitable foundation are being sued for selling “defective and improperly constructed homes.” Gosk talked to one of the residents, Kamaria Allen, who complained: “This has been years of ongoing live and broken promises. We were promised green, healthy, energy-efficient homes and we have everything but those things.”

Back in 2006, NBC’s Today show hyped Pitt’s project when Ann Curry toured the hurricane ravaged area to promote Pitt’s “eco-friendly approach” to rebuilding New Orleans. The Oceans Eleven star preached to Curry that green tech was the “way of the future” because “We just can’t keep consuming ourselves into extinction.”

Pitt’s charitable instincts to help dislocated residents should be applauded, but sadly his devotion to lefty environmentalism means those residents are without homes again.

NATALIE MORALES: Now more of Ann’s exclusive interview with Brad Pitt. The movie star turned social activist is taking on a new role these days, pushing an eco-friendly approach to rebuilding the ravaged city of New Orleans. Ann caught up with him a few days ago, among the ruins.

ANN CURRY: Almost a year after the floodwaters of Katrina decimated this city, piles of garbage still line the streets. The rotting remains of houses haunt neighborhoods and affordable housing is hard to find.

BRAD PITT: I’m telling you these people need help and not being addressed like they should be. They’re not getting adequate support or the support fast enough. It’s real.

CURRY: To try and change the conditions still found in New Orleans, Brad Pitt joined forces with the non-profit group Global Green to sponsor an architectural competition to design a green 12 unit apartment complex.
...
CURRY: The jury judging the entries picked designs that promise to generate as much energy as the buildings would consume.

PITT: Understand this is the way of the future. We’ve got to address these issues. It’s just a matter of time. And we might as well start here. This is a great opportunity to do so with this rebuilding effort.

CURRY: What convinces you that this is the way of the future?

PITT: Oh because it’s inevitable. Dependency on oil, the gas prices, the health rates. We just can’t keep consuming ourselves into extinction. We got to regroup and adopt a new paradigm. A new way of thinking.
...
PITT: This one really draws on New Orleans housing but yet it’s still evolved in choosing cheap recycled materials. And there is a lot of – there’s a big sense of play in this one. It’s quite interesting.

CURRY: All the entries rely heavily on the use of recycled and energy-efficient materials – like florescent lights and reclaimed wood and timber.

CO-HOST HODA KOTB: This morning on Today’s Talker the new lawsuit facing Brad Pitt and the charity he created in the wake of hurricane Katrina.

CORRESPONDENT STEPHANIE GOSK: Good morning guys. You know, Pitt’s Make It Right project was a bold and noble idea. Go into New Orleans’ lower ninth ward and build well designed, affordable and sustainable houses. But now some of the people who got the homes say they are dealing with another disaster. The homes sprang out of Katrina’s destruction with their unique eye-catching designs but more importantly, they were new places to live in New Orleans’ devastated lower ninth ward. Brad Pitt formed the nonprofit charity, Make it Right, himself. Making the announcement here on Today.

BRAD PITT FROM DECEMBER 3, 2007: I think of a father that once had a home here and raised my kids, and raising my kids here and if I lost everything and had no way to return, how would make me feel bad.

GOSK: And today homeowners like Kamaria Allen say many of the homes that were built are falling apart.

ALLEN: This has been years of ongoing live and broken promises. We were promised green, healthy, energy-efficient homes and we have everything but those things.

ALLEN: I put that key the door the first time and I did a happy dance for like five minutes.

GOSK: But then she says the problems started. Rusty power sockets, mushrooms growing from the home’s siding. She sold the house back to make it right as part of a settlement in 2013. NBC news spoke to 11 other residents, 10 on the record, who said that many of the Make It Right homes are rotting and dangerous and their calls to the organization go unreturned. Some say repairs are only done if residents agree to sign non-disclosure agreements. Last week, two different homeowners filed a lawsuit against Brad Pitt and Make It Right, accusing them of selling defective and improperly constructed homes.

RON AUSTIN, LAWYER: The Make It Right Foundation has essentially been stringing the poor residents along, promising they would fix the problems, but never –  they never would show up.

GOSK: Make It Right has not responded to NBC’s request for comment. A spokesperson for Pitt declined to comment on the litigation, but released a statement on the actor’s behalf that reads in part, “We have been coordinating repairs of homes experiencing problems since early 2018 and I have total faith in our team on the ground to see this through. I made a promise to the folks of the lower ninth to help them rebuild. It is a promise I intend to keep.”Allen says for her it’s too late.

ALLEN: At one point I felt optimistic that make it right was going to make it right. But at this point I feel like they have abandoned not only my family, but my community.

GOSK: NBC News spoke with the founder of the lower ninth ward’s homeowners association who says the majority of Make It Right’s homes are now vacant. In her words, “it’s just not working out.” Guys, there is much more on this story at nbcnews.com.

KOTB: Started off with such good intentions and then turned into that. Wow!