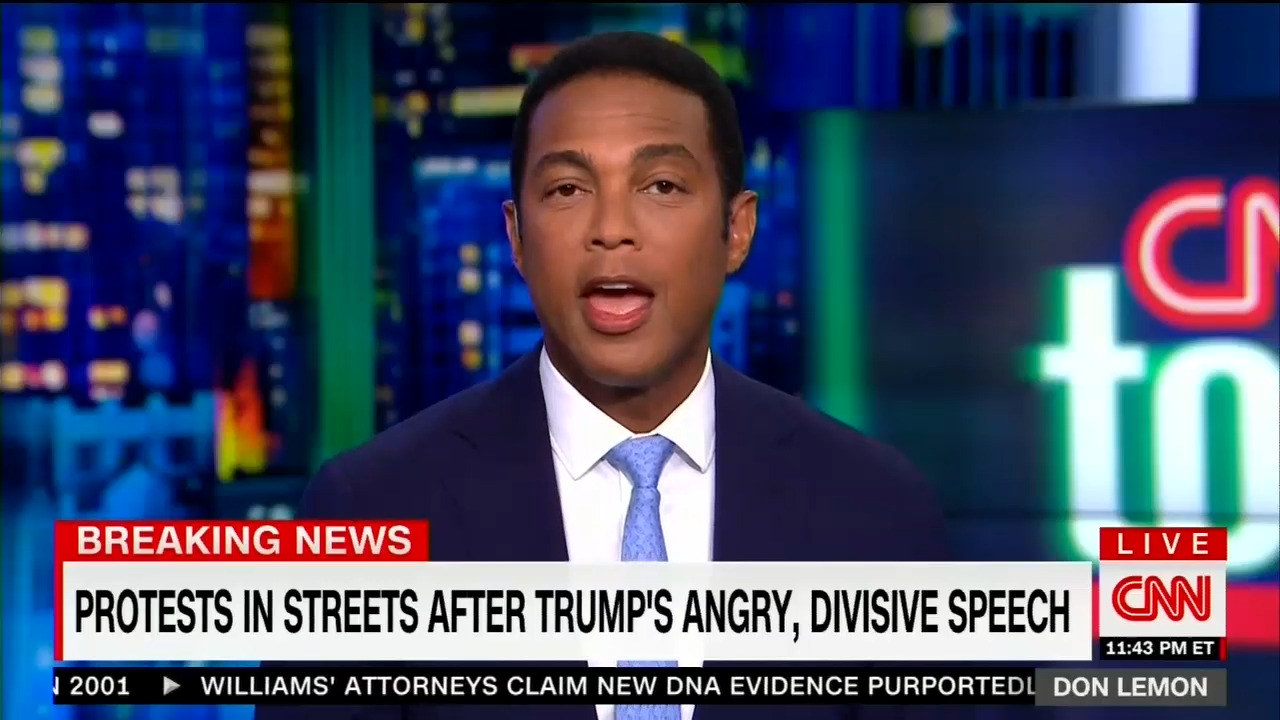 “He’s unhinged, it’s embarrassing and I don’t mean for us, the media because he went after us, but for the country. This is who we elected President of the United States....There was no gravitas. There was no sanity....If you watch that speech as an American, you had to be thinking what in the world is going on? This is the person we elected as President of the United States? This petty, this small, a person who who’s supposed to pull the country together?”
— Host Don Lemon reacting to Trump speech in Arizona, on CNN Tonight, August 22. 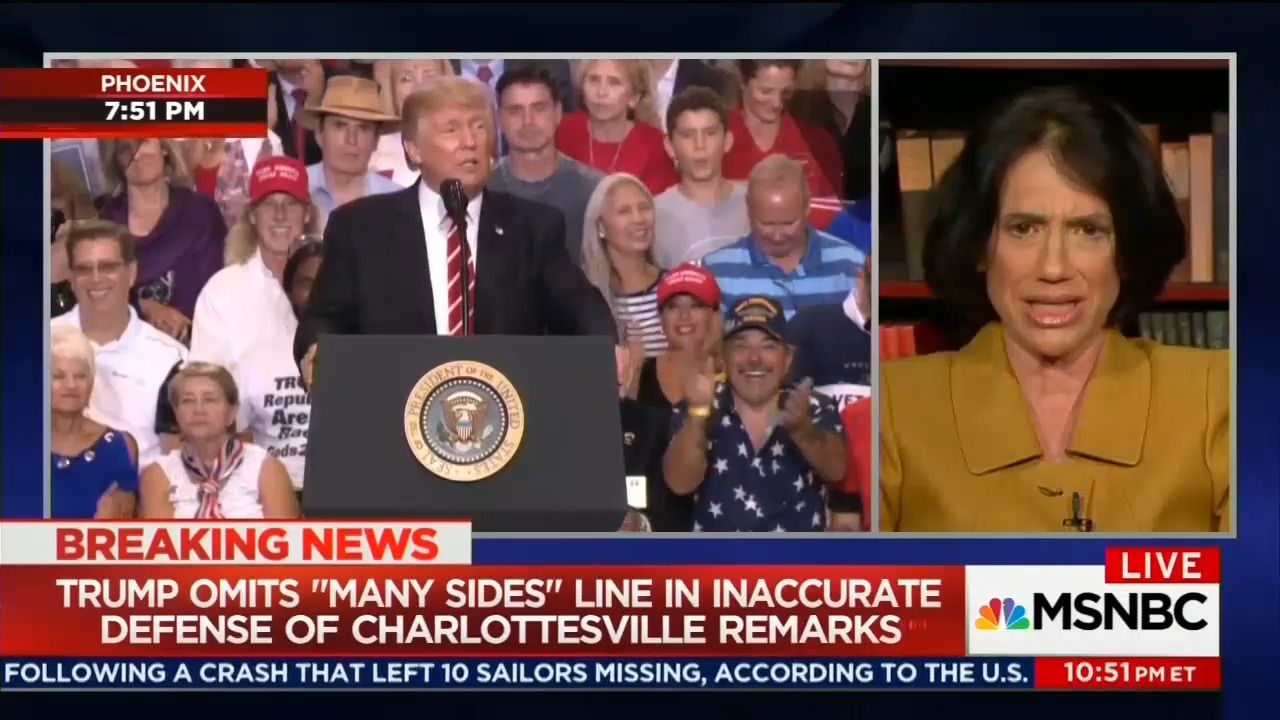 “[Republican] members publicly, privately are acknowledging that guy is a basket case, that he cannot serve, he cannot lead the party. My regret is they’ve all been so cowardly for so long and did nothing to stop him and it took this long to whisper on background that he was unfit. Where were the folks seven months ago, ten months ago, two years ago?”
— Washington Post columnist Jennifer Rubin on MSNBC’s The Last Word with Lawrence O’Donnell, August 22.

3. 'Sociopathic' Trump Is 'Danger to the World' 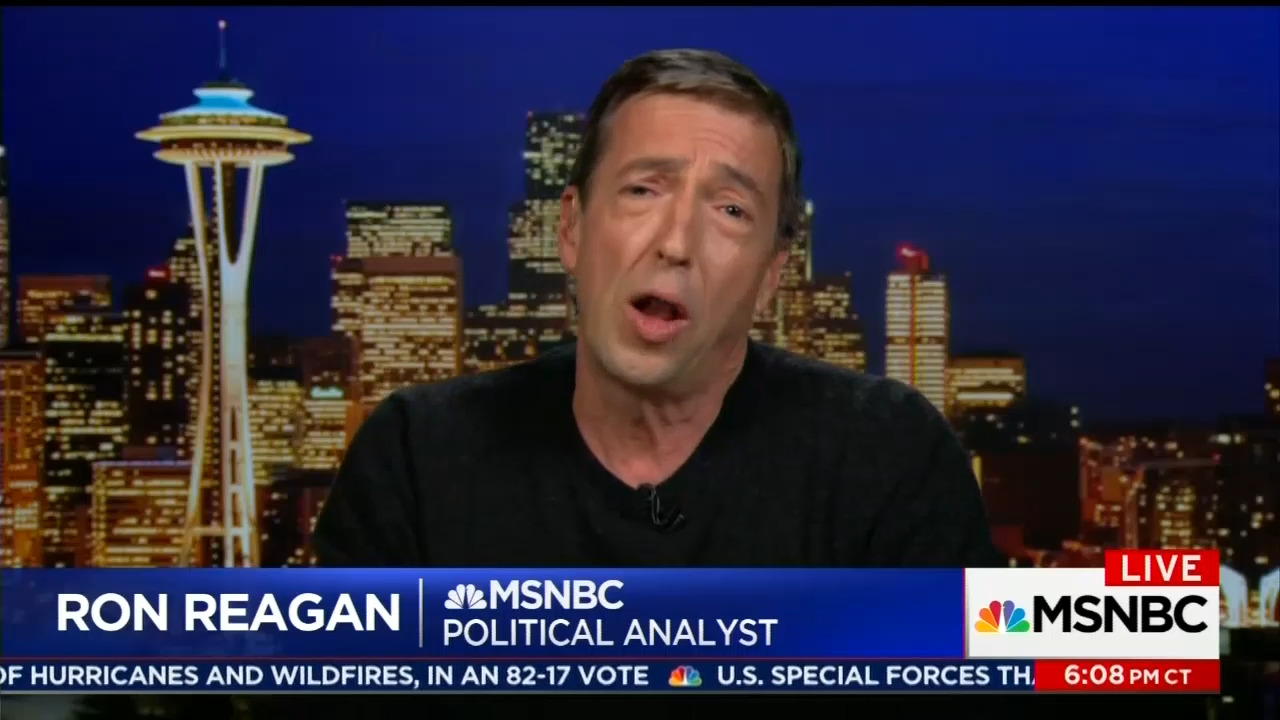 “Donald Trump is a deeply damaged human being. He is a sociopathic, malignant narcissist, and he happens to be the – you know, the electoral system, not the American people, but the Electoral College has sort of vomited this thing up and it landed in the Oval Office and it needs to be removed. It’s a stain. It’s a big glob on the carpet there. It needs to be removed and that means impeachment or the 25th Amendment. This man is a danger to the world.”
— Former MSNBC host Ron Reagan Jr. on MSNBC’s Hardball, October 25. 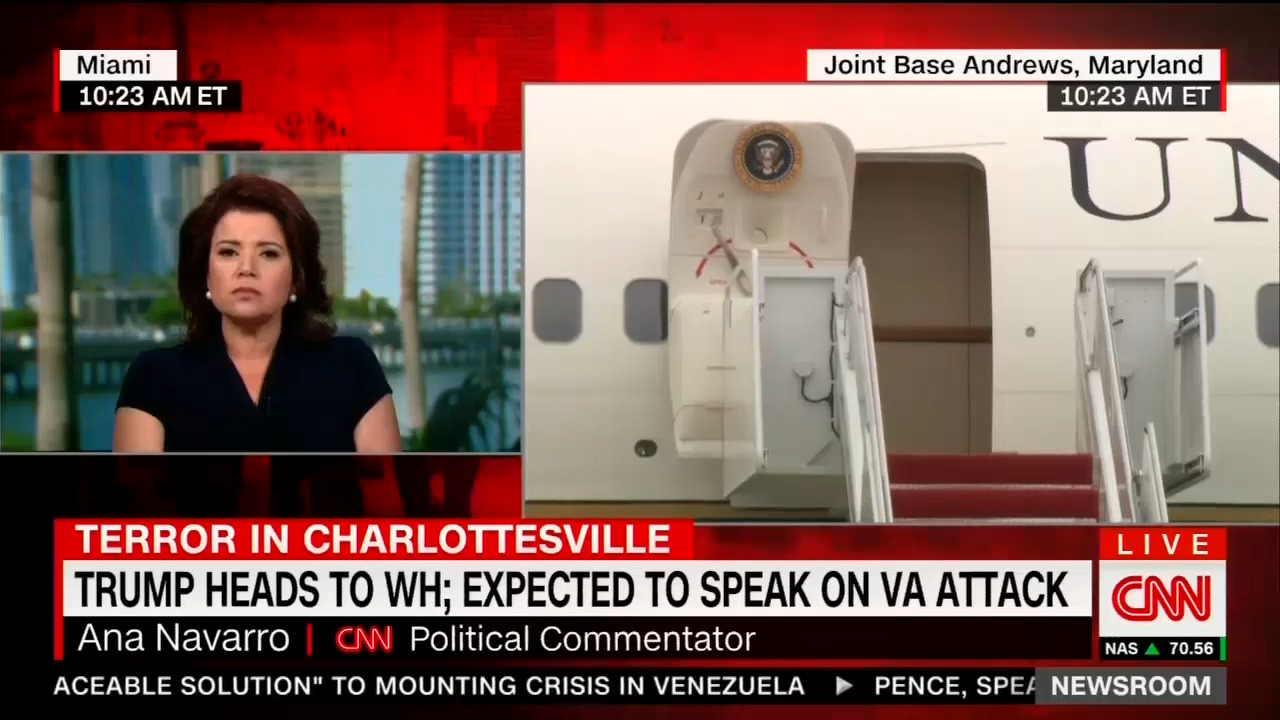 “He [Donald Trump] was a coward. He didn’t have the spine to stand-up as leader of the United States and I feel that to be shameful. I’m glad Republicans are calling him out on it. I’m glad elected leaders in the Republican Party are finally, finally stopping looking the other way and confronting the fact that he’s not only not fit to be president. In my book, his lack of empathy, his lack of leadership, his lack of courage, he’s unfit to be human.”
— Political commentator Ana Navarro, in response to Trump’s Charlottesville, VA speech as aired on CNN Newsroom with John Berman and Poppy Harlow, August 14.

5. 'Menace' Trump Needs to Be Impeached 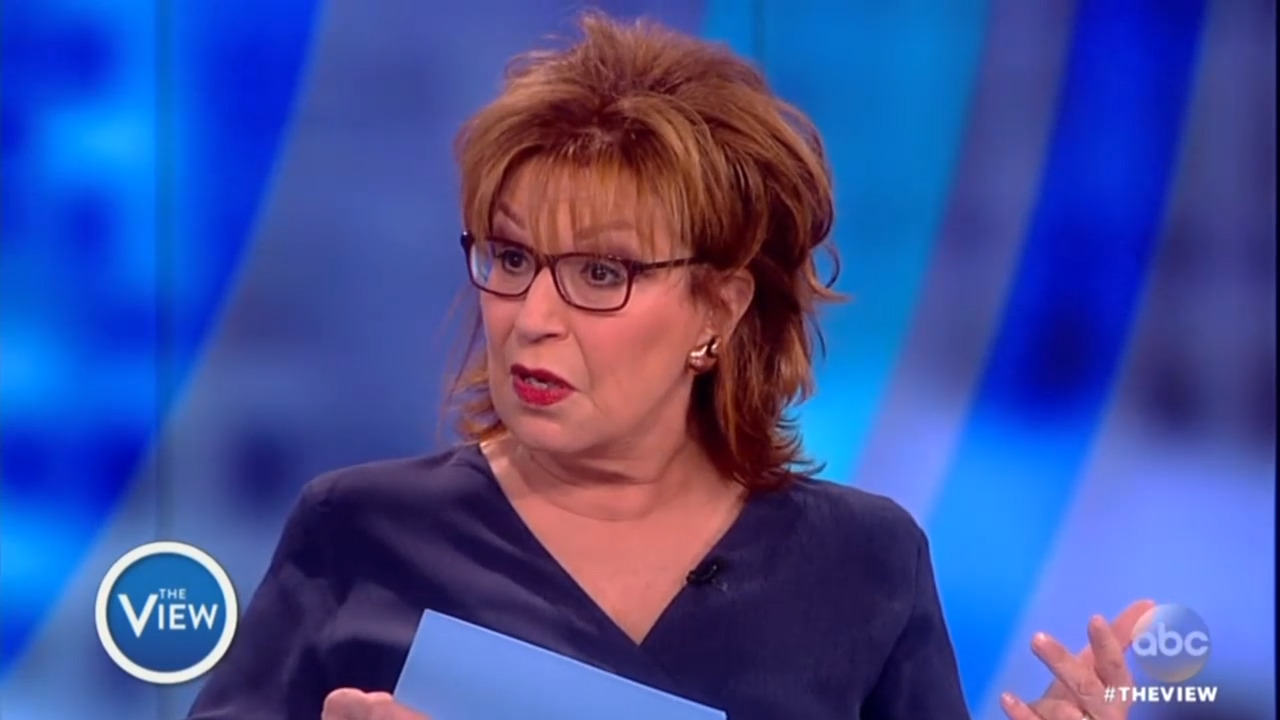 “The thing about Trump is, the things he has said seriously about nuclear weapons is quite frightening. I’ll give you a couple. To Chris Matthews, he asked, ‘Why do we make them, he said, if we wouldn’t use them?’ Ok. The possibility of nuclear war between Japan and North Korea: ‘It would be a terrible thing. If they do, they do.’ Good luck. Enjoy yourselves, folks. He said he was open to nuking Europe because ‘it’s a big place.’...Why doesn’t everybody face it? He needs to be taken out of office. He needs to be impeached. He is a menace. You say Kim Jong Yum-yum is crazy? So is he. So is he. Get real. Come on. He is nuts and we’re in the middle of it!”
— Co-host Joy Behar on ABC’s The View, April 3.

6. 'Detached From Reality' Trump Taking Us to Nuke Showdown 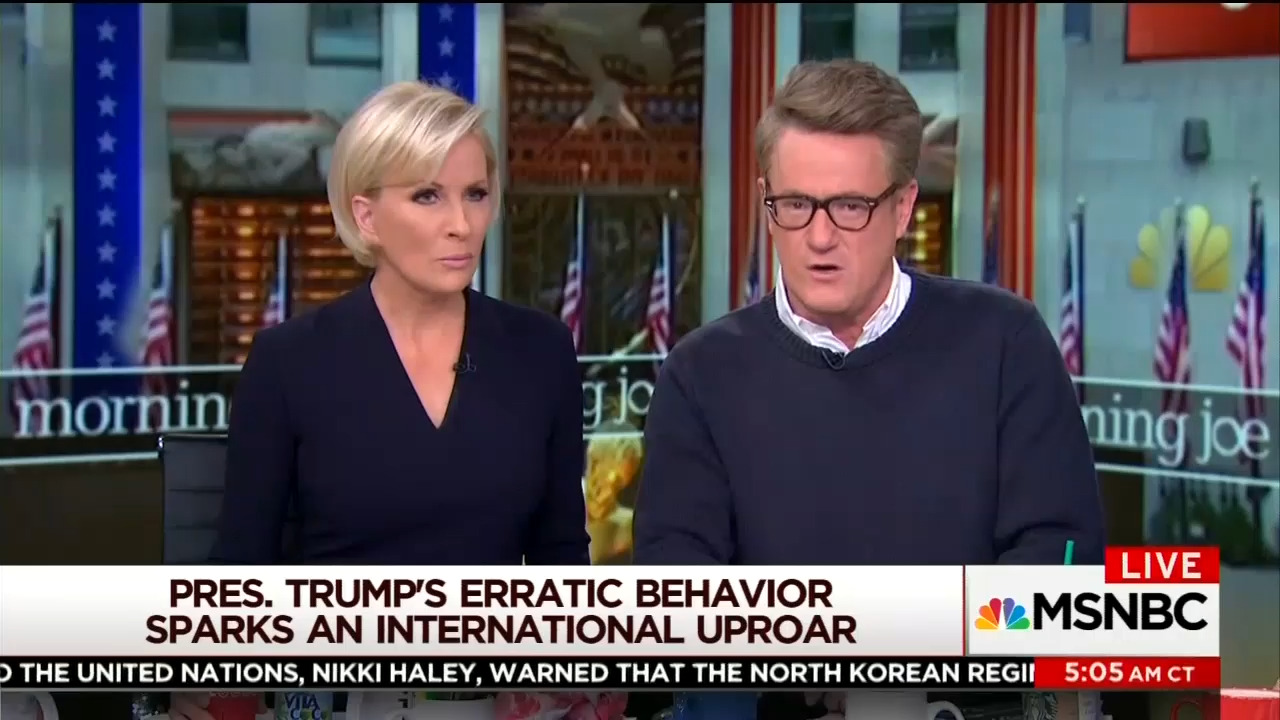 “We are headed towards a nuclear showdown....We heard this months ago, that we are going to have a ground war in Korea. They’ve believed that inside the White House for a very long time. And yet, he [Donald Trump] is completely detached from reality....You have somebody inside the White House that the New York Daily News says is mentally unfit, that people close to him say is mentally unfit, that people close to him during the campaign told me had early stages of dementia.”
— Co-host Joe Scarborough on MSNBC’s Morning Joe, November 30. 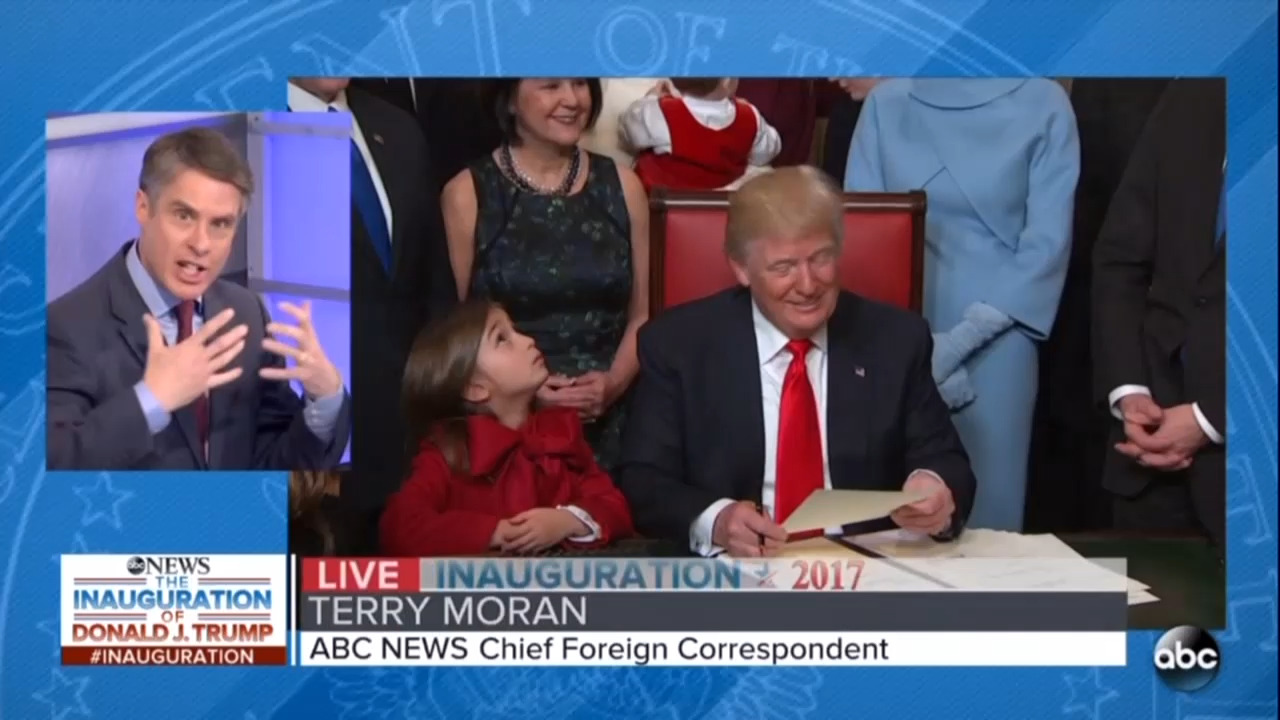 Anchor George Stephanopoulos: “Students of history will take note of that slogan, America first.”
Correspondent Terry Moran: “It’s a loaded term in American history. Now, he defined it here as total allegiance to the United States of America, and it is something, as Cecilia said, this is why he was sent here by people who want to hear that message of America first. However, it carries with it overtones from the 1930s when an anti-Semitic movement saying, ‘We don’t want to get involved in Europe’s war. It’s the Jews’ fault in Germany!’ Charles Lindbergh led them. It is a term, as he defined it his way, but the words themselves carry very ugly echos in our history.”
— ABC News live coverage of Trump inauguration, January 20, 2017. 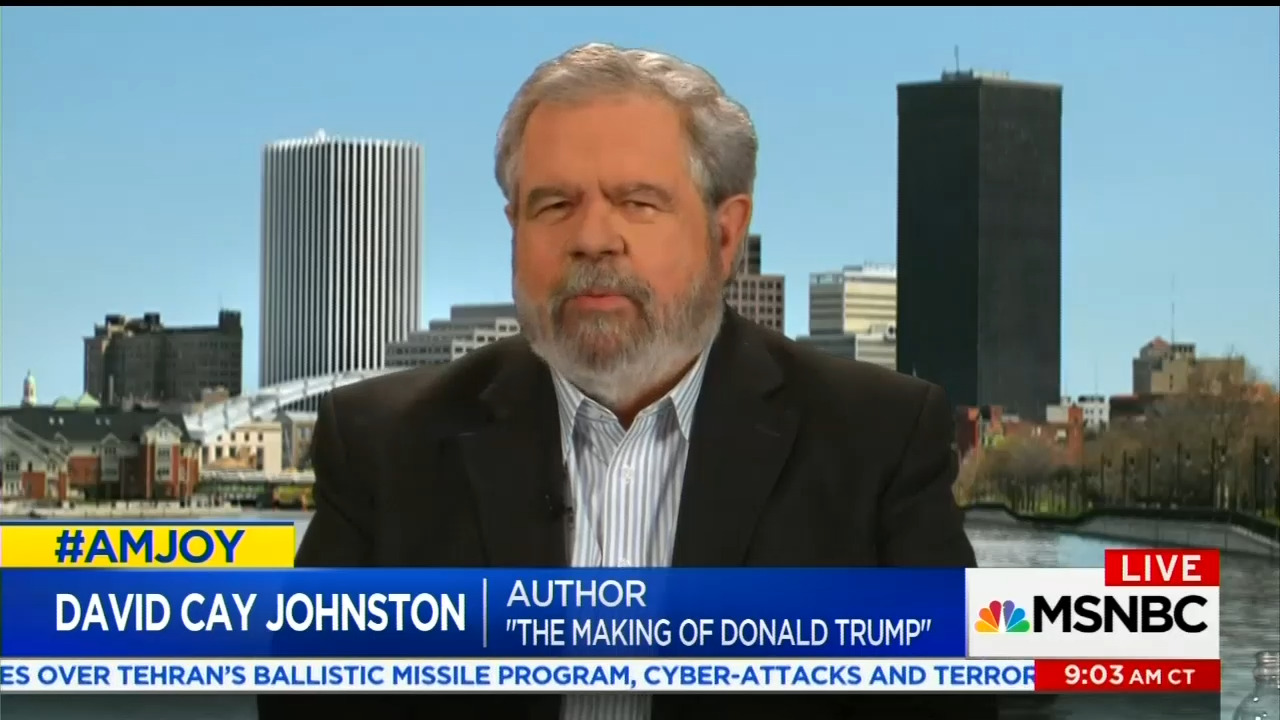 “Donald Trump is a racist. He isn’t just a white supremacist – he’s a flat-out, full racist, and unless your definition of a racist is you hung somebody from a tree, he is a racist.”
— Former New York Times reporter David Cay Johnston about ESPN’s Jemele Hill calling Trump a “white supremacist, as aired on MSNBC’s AM Joy, September 16. 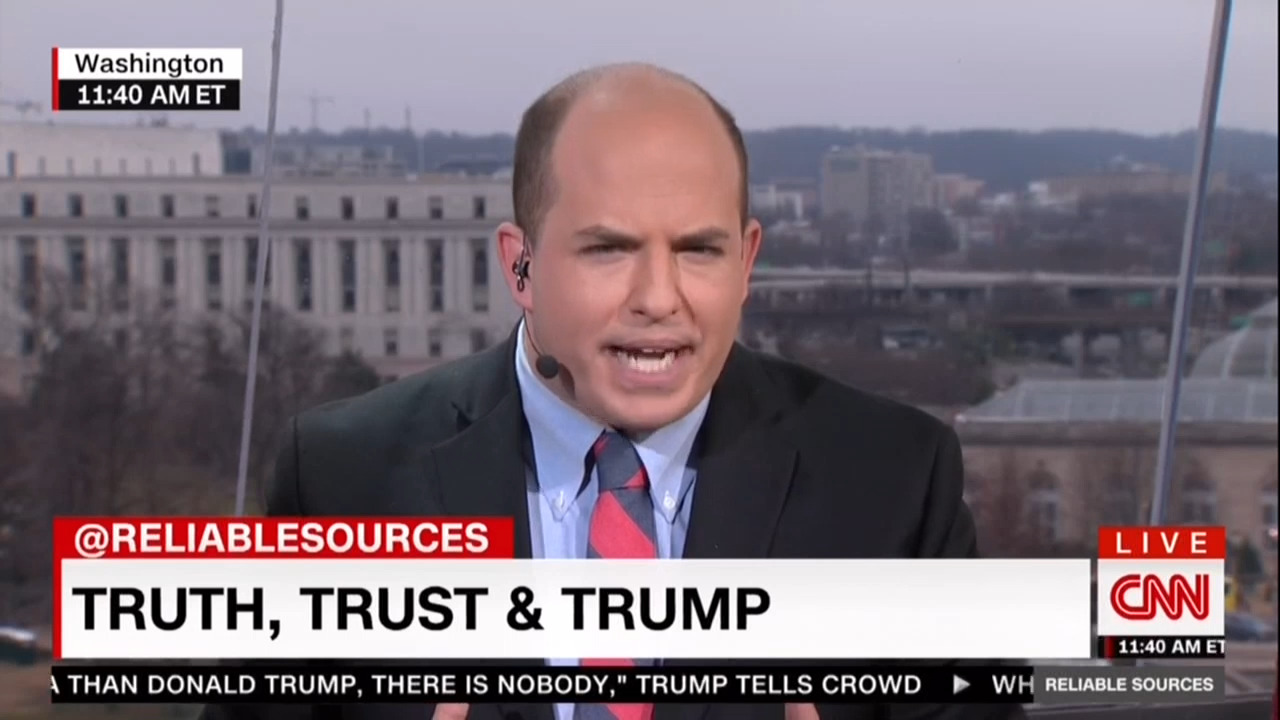 “Will President Trump deny reality on a daily basis? Will he make up his own false facts and fake stats? What will the consequences be? Will reporters give up trying to fact check? Is that the goal? To wear us down, to wear us out...Do citizens in dictatorships recognize what’s happening right here right now? Are they looking at the first two days of the Trump administration and saying, ‘Oh, that’s what my leader does?’ What should we learn from them today?”
— Host Brian Stelter on CNN’s Reliable Sources, January 22, 2017.

10. Trump's 'Treacherous' Attacks on the Press 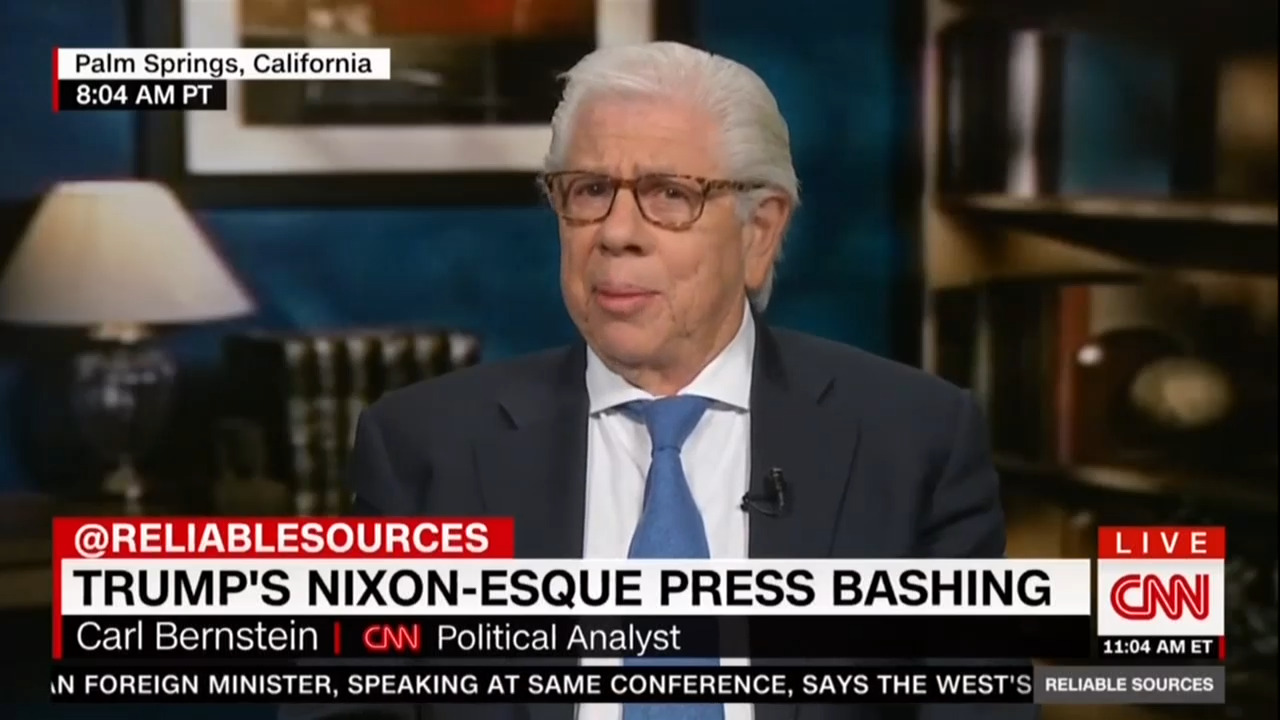 “Trump’s attacks on the American press as ‘enemies of the American people’ are more treacherous than Richard Nixon’s attacks on the press. Nixon’s attacks on the press were largely in private. There’s a history of what ‘enemy of the people,’ that phrase means as used by dictators and authoritarians including Stalin including Hitler....We’ve never seen in an American president such open authoritarian moves and rhetoric. This is a terrible time we’re living in..”
— CNN political analyst and former Washington Post editor Carl Bernstein on CNN’s Reliable Sources, February 19. 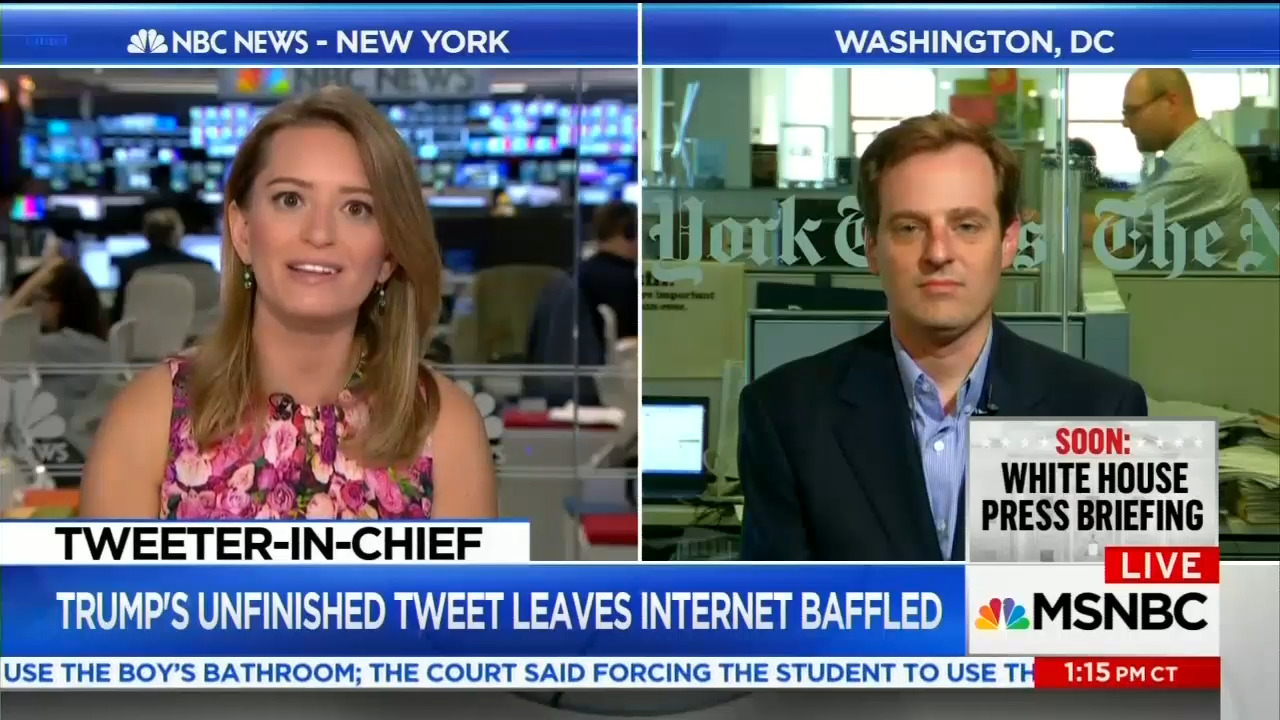 “If something like that [Trump typo] can stay on Twitter for six hours, what does that say about who controls the information coming out of the White House? And what if somebody hacked into Twitter and posted a message that could have global implications? Saying something like...‘I’m going to launch nuclear weapons’....This kept me up last night! I was up until two in the morning wondering when this tweet was going to go away.”
— Correspondent Katy Tur reacting to Donald Trump accidentally typing “covfefe” in a tweet, as aired on MSNBC Live, May 31. 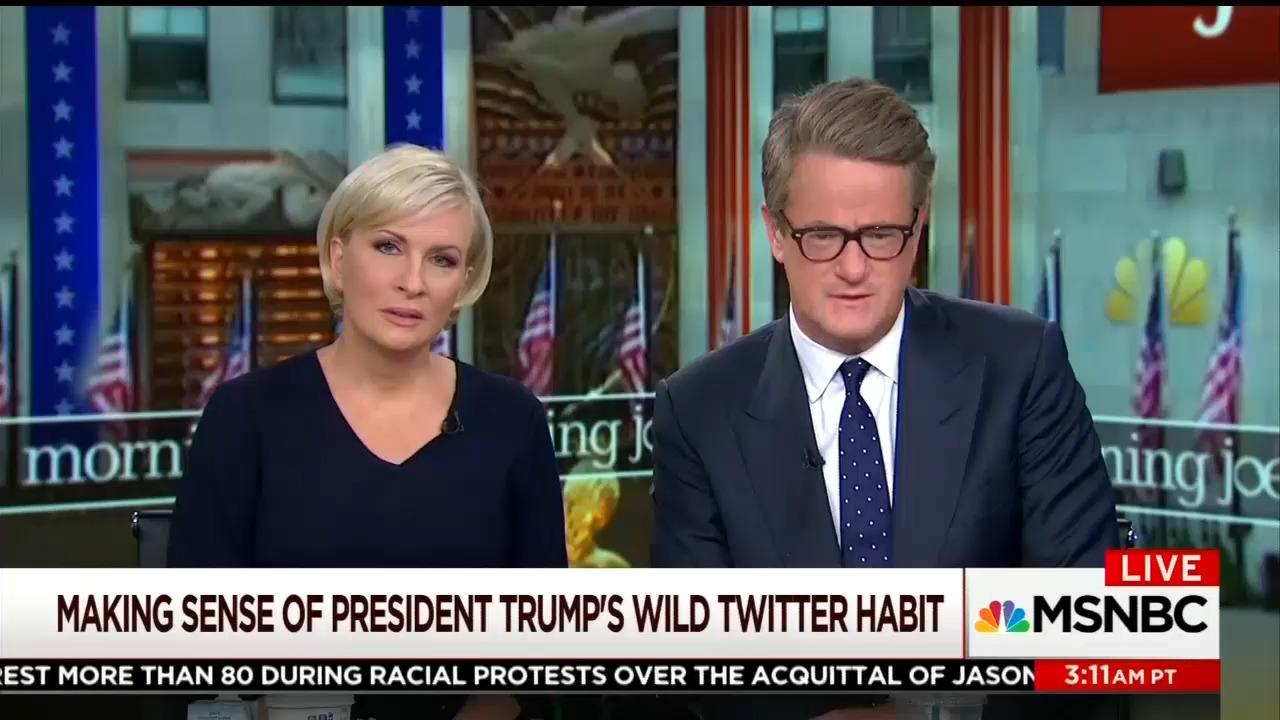 “We have become desensitized to these tweets and that they are dangerous...It’s not the madman [North Korean dictator Kim Jon Un] with his hand on the button, it’s his, it’s the madman [Donald Trump] with his finger on his Blackberry or whatever iPhone that could tweet.”
— Co-host Mika Brzezinski on MSNBC’s Morning Joe, September 18. 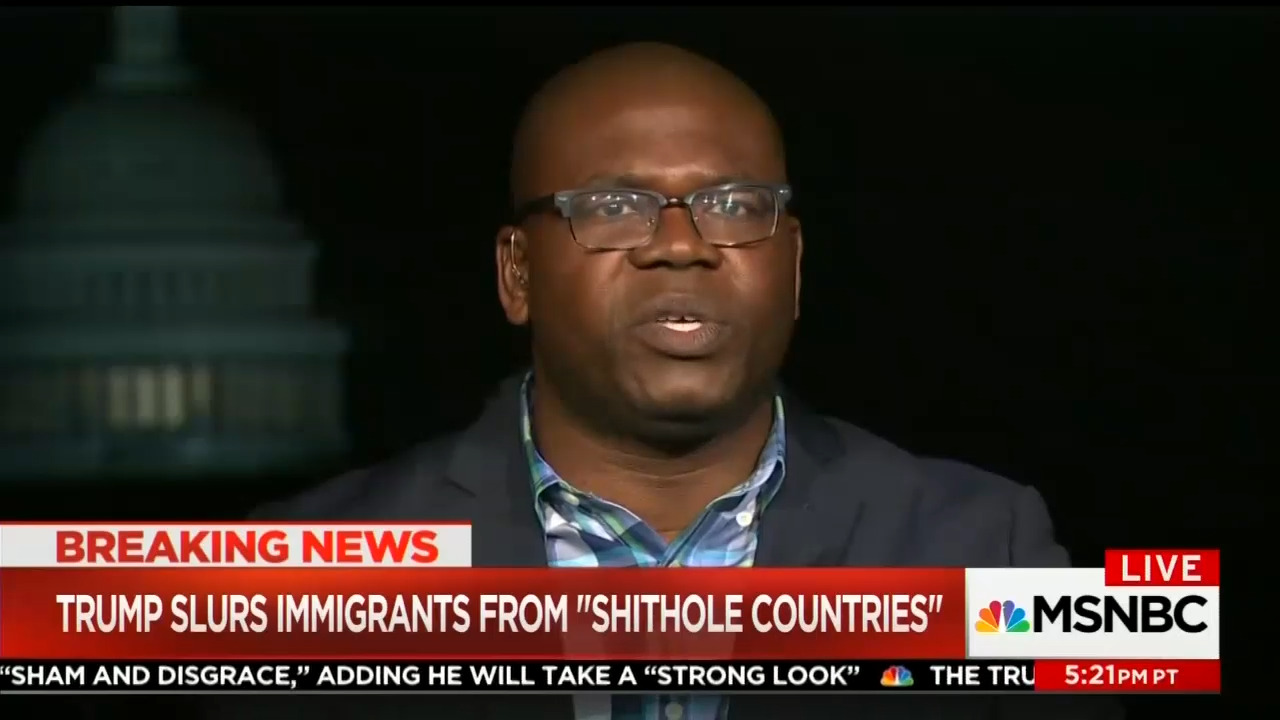 “The President is a white supremacist –  we heard in Charlottesville the President is a terrorist sympathizer, and our President is a clear and present danger to non-white people in America....Unless the Democratic party realizes that this man is an enemy to non-white people in America – and this is not an exaggeration –  everything in his rhetoric and policy has said so –  we will be in danger as a sovereign nation.”
— The Root’s politics editor Jason Johnson on MSNBC’s All In, January 11, 2018. 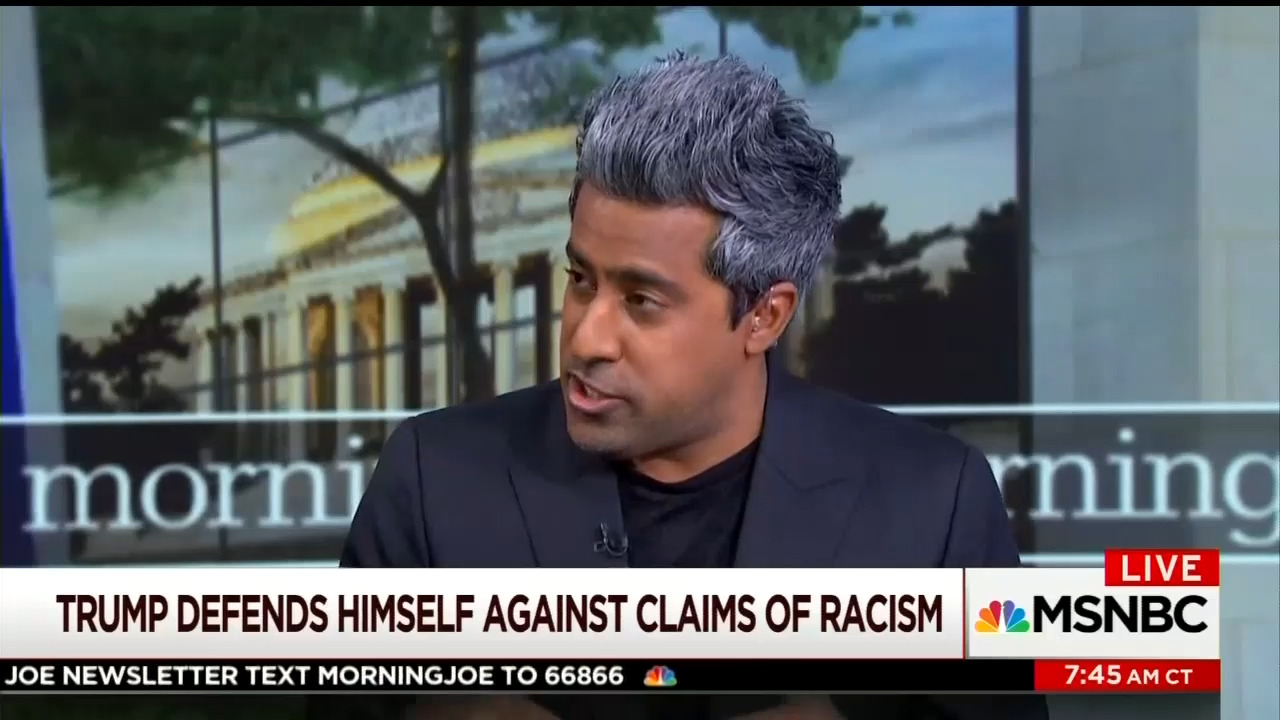 “We have a man child who is deranged and racist in this office. But it takes a lot of other silent people to go along with it. And we’re seeing those silent people in Congress....We are seeing all kinds of people who for small, personal, trivial gains are willing to see their country turned into the real s-hole.”
— Political analyst Anand Giridharadas on MSNBC’s Morning Joe, January 15, 2018. 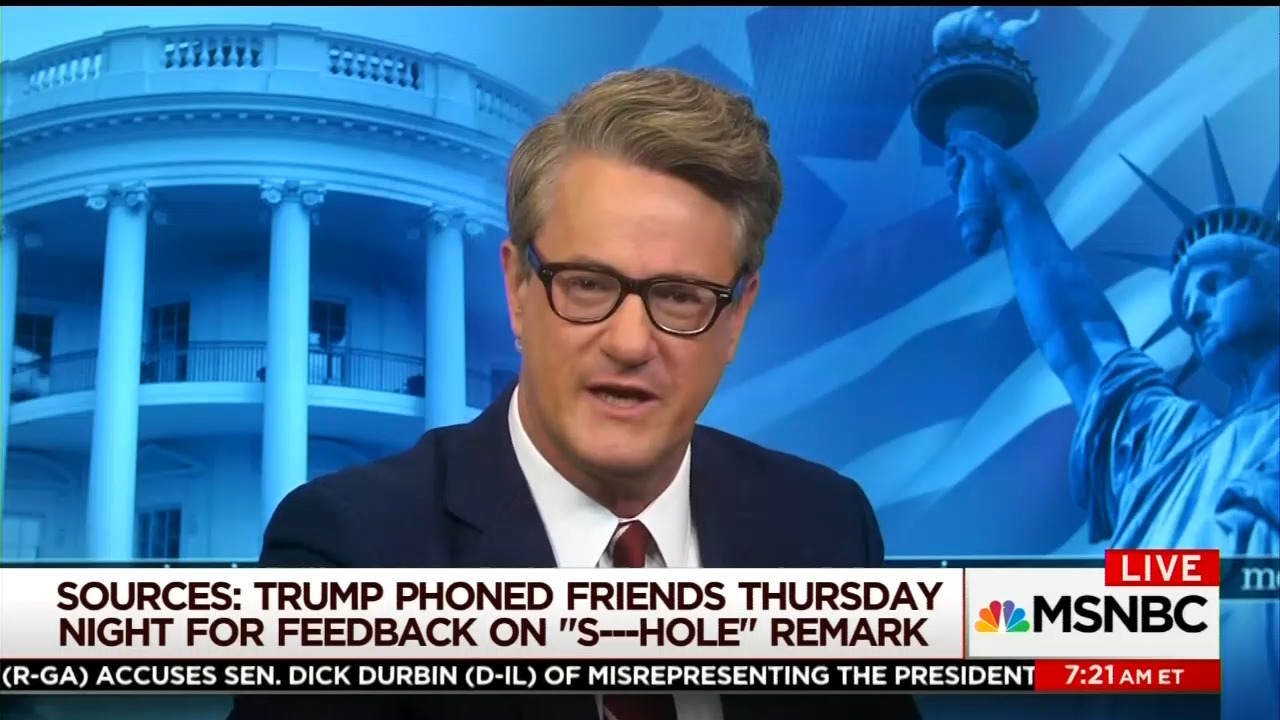 “[The Founders] wrote a Constitution that would have checks and balances on a tyrannical president. They never, ever let their imaginations be darkened by the possibility of a compliant Congress in the face of a tyrannical president. But that appears to be exactly what we have in 2018.”
— Host Joe Scarborough on MSNBC’s Morning Joe, January 15, 2018.