NewsBusters Year-in-Review: The Most Outrageous Quotes of 2017, Part IV 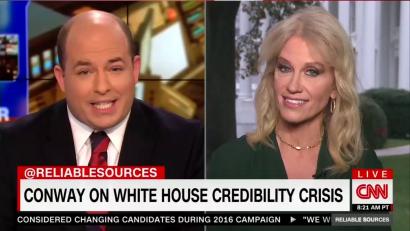 All this week, NewsBusters is recounting the most obnoxious liberal bias of 2017. Monday, we presented the most outrageous examples of journalists fawning over liberal or left-wing icons; on Tuesday, we showcased some of this year’s nastiest attacks on Republicans or conservatives; and yesterday, we highlighted the media’s year-long freak-out over President Donald Trump.

Today, a look at the stupidest quotes of the year. Included in this package are Chris Matthews warning Donald Trump’s son-in-law Jared Kushner that he might be executed, claims that the National Anthem is “racist,” and The New York Times celebrating socialism as really “sexy.”

Host Rachel Maddow: “Interesting portrait of power in the new — in the new White House. Jared Kushner is the son-in-law of the President....A lot of people felt like the anti-nepotism laws would prevent a hire like that but they believe that they’re on firm ground. Jared Kushner will be a senior adviser to his father-in-law.”...
Chris Matthews: “It’s hard to – Rachel – it’s hard to fire your son-in-law....but Mussolini had a great solution to that. He had him executed. So, it’s –  ”
Maddow: “Jesus, Chris!
Matthews: “So, if I were Jared, I’d be a little careful.”
— During MSNBC’s live coverage of Trump’s inauguration, January 20.

It Will Be Slow But Trump Could “Kill Us All”

“There are a variety of ways that Trump could kill us all. The slowest, surest and most likely way he’ll do it is via climate change.”
— March 21 tweet by MTV News Senior National correspondent Jamil Smith.

“Historians in the near future will mark today, March 28, 2017, as the day the extinction of human life on earth began, thanks 2 Donald Trump.”
— March 28 tweet from filmmaker Michael Moore.

A White Woman Lost Election Because Country is Racist?

Wouldn’t We Be Better Off If Hillary Won?

“In terms of protecting democracy, protecting respect for the Office of the Presidency and protecting our image abroad, is it possible in your mind to consider that it would have been better if Hillary Clinton won this election?”
— Co-host Matt Lauer’s question to Sen. Jeff Flake on NBC’s Today, October 25.

Only a “White Nationalist” Would Condemn Communism?

They Didn’t Know How Lucky They Were, Living In the USSR

“The government last year said nearly twenty million Russians lived below the poverty line on less than a $139 a month. It wasn’t always like this. In the Soviet era, most villagers worked on huge collective farms. Life wasn’t easy but the government provided for the people. All of that came to an end when the Soviet Union collapsed. Areas like this never recovered. Nadezhda, whose name translates to hope, has little of it left. ‘It would be so good to live like before,’ she tells me, ‘Under communism, there were plenty of jobs and plenty to eat.’ Today, she collects cranberries to sell on the side of the road. There are few customers and many hungry nights.”
— Correspondent Lucy Kafanov on NBC Nightly News, June 11.