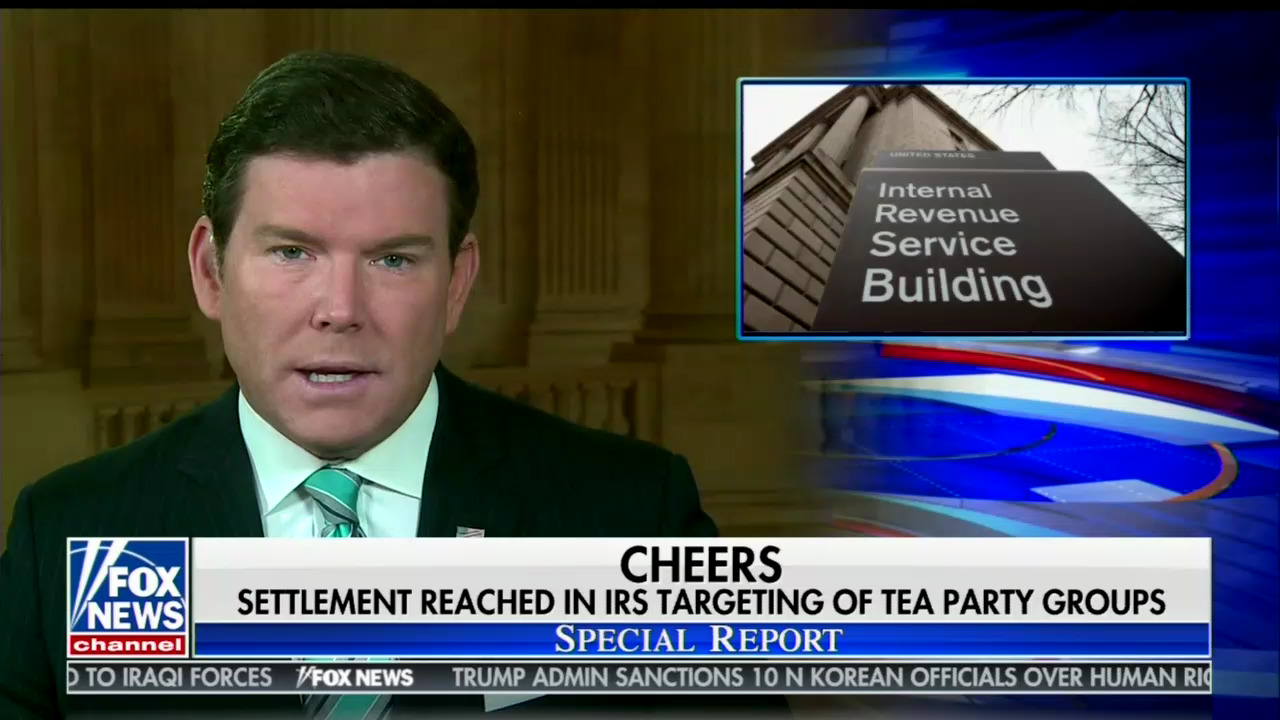 Finally! Tea Party groups that were targeted by Barack Obama’s IRS have vindication. But you wouldn’t know it, if you got your news from the Big Three (ABC, CBS, NBC) networks.

On Thursday, the Department of Justice agreed to settle two lawsuits from conservative organizations. American Center for Law and Justice attorney Jay Sekulow hailed it as “an precedented victorious conclusion to our years-long legal battle against the IRS, the bureaucratic agency has just admitted in federal court that it wrongfully targeted Tea Party and conservative groups during the Obama Administration,” and added: “The IRS is consenting to a court order that would prohibit it from ever engaging in this form of unconstitutional discrimination in the future.”

While the liberal Washington Post (page A3) and New York Times (page A18) covered the momentous decision in their Friday print editions, the Big Three (ABC, CBS, NBC) networks have yet to mention the settlement. Sadly, it’s not surprising as the networks haven’t covered the IRS-Tea Party scandal in almost three years.

It’s been nearly three years (1,087 days to be exact) since any network reported on the IRS scandal, when CBS This Morning made a mention of it on October 28, 2014. NBC last noted the targeting scandal 1112 days ago and it’s been a whopping 1258 days since ABC last mentioned it on the May 8, 2014 Good Morning America.

In that period of time there have been multiple revelations which have gone unreported by the networks, including Barack Obama’s Justice Department ending its investigation without any criminal charges filed against Lois Lerner, and the subsequent announcement that the House had begun procedures to impeach IRS Commissioner John Koskinen. Also unreported: the discoveries that Lerner used another personal e-mail account to conduct government business that utilized the alias “Toby Miles” and called Republicans “evil and dishonest.”

Speaking of Koskinen, on Thursday The Washington Examiner reported that he is finally being replaced. Of course, the networks didn’t bother to report this piece of big news either.

Also not reported by the networks? Another incriminating e-mail. According to the October 25 Washington Times: “an email from an IRS agent to her supervisors alerting them that the agency was, in fact, singling out some groups’ applications for extreme scrutiny ‘primarily because of their political party affiliation.’”

The settlement was covered on Fox News. FNC host Bret Baier covered it on the October 26 edition of Special Report:

The following is an excerpt from the Washington Post’s Matt Zapotosky October 25 online story on the settlement:

The Justice Department has reached settlement agreements with groups that alleged their constitutional rights were violated when their applications for tax-exempt status received extra scrutiny because their names contained words such as “tea party” or “patriots,” court filings show.

In one agreement, which still must be approved by a judge, the Internal Revenue Service admitted that its treatment of the organizations was “wrong” and expressed a “sincere apology” for what happened.

The Justice Department and those suing agreed they would dismiss the case with a judge’s declaration that it was illegal to unevenly apply tax laws based on an organization’s name or particular political viewpoint.

The targeting of tea party organizations that applied for tax-exempt status was a major controversy of the Obama administration, with hundreds of conservative-leaning groups receiving scrutiny. In some cases, it delayed the processing of applications for years.

Many felt the conduct was an example of the president punishing his political enemies.

In a statement, Attorney General Jeff Sessions took aim at his predecessors — noting it was “during the last administration” that officials began using “inappropriate criteria,” such as groups’ names or policy positions, to screen applications. He said the criteria “disproportionately impacted conservative groups.”

“There is no excuse for this conduct,” Sessions said. “Hundreds of organizations were affected by these actions, and they deserve an apology from the IRS. We hope that today’s settlement makes clear that this abuse of power will not be tolerated.”