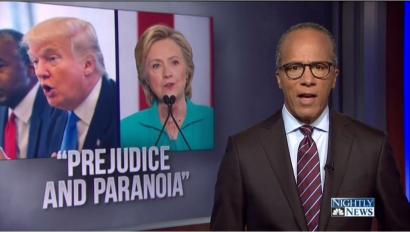 On Friday, it was announced that NBC Nightly News anchor Lester Holt will be moderating the very first presidential debate between Hillary Clinton and Donald Trump on September 26. Holt took over anchoring duties from the disgraced Brian Williams in June of 2015 and a look at his coverage of this election cycle suggests he may favor Clinton in his selection of debate questions.

When he interviewed Trump for Nightly News he hit the GOP presidential candidate with a hard line of questions: “You saw images of Republicans burning their Republican registration cards. So angry at the idea of you representing the party....You said things that shocked people, outraged people, about a temporary ban on Muslim immigration, to your characterizations of Mexican immigrants....Your negatives are staggering.” Contrast to his sitdown with the Democratic nominee in which he asked  “a Bernie Sanders supporter, stood up and said young people don’t trust you....And when he said that I winced....Do you get your feelings hurt sometimes?”

In his career at NBC News, Holt has also celebrated Obama administration policies: “The ObamaCare law now directly affecting so many families who say it’s been quite literally a lifesaver” and warned against the dangers of sport utility vehicles: “Is your SUV a weapon of terrorism?”

The following are just a few examples of Holt’s most liberal moments in his time at NBC, as culled from the MRC’s archives:

Holt Hammers Trump Repeatedly, But Asked Hillary If Her “Feelings Get Hurt”

“You were sitting here watching the top of the broadcast with us. You saw images of Republicans burning their Republican registration cards. So angry at the idea of you representing the party. What did you think when you saw that?...You’re speaking to the whole country now. You said things that shocked people, outraged people, about a temporary ban on Muslim immigration, to your characterizations of Mexican immigrants. Those things worked for you. They resonated. They worked. They got you to where you are today. But as you try to appeal to the entire country, do you stand by them? Do you stand, for example, behind the idea of a ban against foreign Muslims coming here?...Your negatives are staggering. Disapproval 69% women, African-Americans, 88%, Latinos 79%,  people under 34, 75% disapprove. How much of that is self-inflicted by some of the rhetoric from the primary campaign, and how do you heal that while still respecting those who got you here?
— Questions to Donald Trump on NBC Nightly News, May 4.

“I want to ask you about a moment at the town hall the other day. A young man, a Bernie Sanders supporter, stood up and said young people don’t trust you....And when he said that I winced. And I was wondering, you’ve obviously been in tough battles, political battles, but do you get your feelings hurt sometimes?”
“What frustrates you the most about perceptions about you?”
— Holt interviewing Democratic presidential candidate Hillary Clinton, January 29.

“You and your siblings have been very effective this week trying to paint a picture of your dad — you know, the dad that you know. At the same time, when you think about a president, strength is obviously important; but we also sometimes look for our leaders to be compassionate — to console us during national tragedy. We saw President Obama in Dallas a week or so ago. We haven’t seen that Donald Trump. Is this a man that can cry? Can he emote?”
— Anchor Lester Holt to Donald Trump Jr. on NBC Nightly News, July 21.

“Eight years ago, we were talking about, ‘Wow, we may see the first African-American president.’ After tonight, will people begin to talk in terms of, ‘Wow, we might see the first female president?’”
— NBC Nightly News anchor Lester Holt during NBC’s live Super Tuesday coverage, March 1.

Holt Trumpets the Wonders of ObamaCare

“Across the country, over ten million people have now signed up for health insurance under the ObamaCare law as the number of Americans without insurance creeps lower. It’s a result a lot of people didn’t expect after that rocky rollout. The ObamaCare law now directly affecting so many families who say it’s been quite literally a lifesaver.”
— NBC Nightly News anchor Lester Holt, June 25, 2015.

“The showdown over immigration takes a dramatic turn: A last-minute ruling dashes American dreams for millions of families under the threat of deportation.”
— Fill-in anchor Lester Holt opening the NBC Nightly News, February 17, 2015.

“In a major win for the Obama administration, the nuclear deal with Iran now appears unstoppable. The President has now locked down all the votes he needs for the controversial agreement to survive in the Republican-controlled Senate.”
— NBC Nightly News anchor Lester Holt, September 2, 2015.

“Heightened fears in the U.S. over Syrian refugees in the wake of the Paris attacks led the House to approve a bill today that would virtually halt all Syrian refugees from coming into the U.S. As NBC’s Andrea Mitchell shows us, the Republican frontrunners drummed up the fear talk today to a new level.”
— Anchor Lester Holt on NBC Nightly News, November 19, 2015.

Obama Will Save the Climate “Refugees”

“Our team on an extraordinary journey to a place that is rapidly disappearing. Families bracing to flee what could be the first American refugees of climate change....It’s an emergency at the top of the world right now, and Americans are right on the front lines. Up next, our journey to a spectacular place on Earth where American families are living in fear as a rapidly changing climate threatens into inundate them.”
— NBC Nightly News anchor Lester Holt highlighting Barack Obama’s global warming pitch, September 1, 2015.