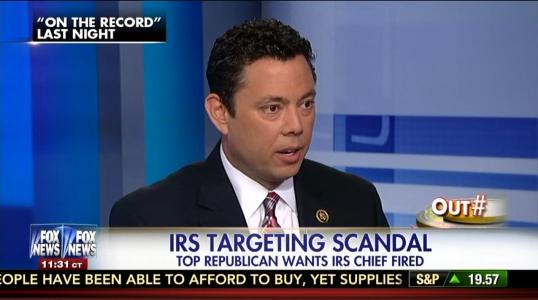 -When Lois Lerner found out that instant messaging e-mails were not automatically archived she responded: “Perfect.”

-The IRS failed to search 5 of the 6 possible sources of electronic media for Lerner’s emails.

None of these three stunning IRS scandal developments, that have unfolded this week, have yet to be reported on by any of the Big Three network evening or morning shows.

The cover-up behind the IRS targeting scandal continues to unravel, despite President Barack Obama’s protest to The Daily Show’s Jon Stewart last week that “the truth of the matter is there was not some big conspiracy.” This week’s revelations provided the perfect opportunity to catch Obama in a “gotcha” moment but so far ABC, CBS and NBC have reacted with total silence.

The following is a rundown of the IRS targeting scandal developments this week that, so far, the networks have refused to cover:

On Monday, AP’s Stephen Ohlemacher reported on Chaffetz’s call for Koskinen’s job in his July 27 article:

The Republican chairman of a powerful House committee called for the removal of the IRS commissioner Monday, saying he has obstructed congressional investigations into the treatment of conservative groups.

Rep. Jason Chaffetz, R-Utah, sent a letter Monday to President Barack Obama, asking him to remove IRS Commissioner John Koskinen. Chaffetz is chairman of the House Oversight Committee, which has been investigating the IRS for more than two years.

"Throughout his tenure, Commissioner Koskinen obstructed these congressional investigations," Chaffetz wrote in a letter that was also signed by 20 other Republicans on the Oversight Committee. "His obstruction takes the form of failure to comply with a congressional subpoena, failure to testify truthfully and failure to preserve and produce up to 24,000 emails relevant to the investigation."

Chaffetz also raised the possibility of impeaching Koskinen or voting to hold him in contempt of Congress. But when pressed, Chaffetz was noncommittal, saying those were tools available to Congress if the White House does not act.

On Tuesday, Americans for Tax Reform’s Alexander Hendrie posted the following on Lerner’s reaction to the IRS’s use of instant messaging:

The IRS used a “wholly separate” instant messaging system that automatically deleted office communications, according to documentation released by the House Oversight Committee on Monday. The system appears to have been purposefully used by agency officials responsible for the targeting of conservative non-profits, in order to evade public scrutiny.

The system, known as “Office Communication Server” or OCS was used by IRS officials, including many in the Exempt Organizations (EO) Unit, which was headed by Lois Lerner.

As the Oversight Committee report states, the instant messaging system did not archive any communications, so it is not possible to know what employees of the EO unit discussed on it.

However, in an email uncovered by the Committee Lerner warns her colleagues about evading Congressional oversight:

“I was cautioning folks about email and how we have had several occasions where Congress has asked for emails and there has been an electronic search for responsive emails – so we need to be cautious about what we say in emails.”

Lerner then asks whether OCS is automatically archived. When informed it was not, Lerner responded “Perfect.”

While it is possible to set the instant messaging system to automatically archive messages, the IRS chose not to do so, according to one employee interviewed by the Committee. The fact that the agency chose not to archive messages raises questions about the true purpose of OCS and what discussions took place.

Needless to say, the apparent use of OCS to evade Congressional oversight once again shows that the IRS does not want the American people to learn the truth about the Lois Lerner targeting scandal.

On Tuesday, Hendrie also filed this July 28 post on the IRS’s less than exhaustive search for missing e-mails:

The IRS failed to search five of six possible sources of electronic media for Lois Lerner’s emails, according to a documentation released by the House Oversight Committee on Monday.

Over the course of investigations into the Lois Lerner targeting scandal, Commissioner John Koskinen repeatedly assured Congress that he would provide all of Lois Lerner’s emails. But based on testimony from the Treasury Inspector General for Tax Administration (TIGTA), this did not occur. The agency’s ineptness -- or corruption -- resulted in 24,000 Lerner emails being lost when they were “accidently” destroyed.

According to TIGTA official Timothy Camus, the IRS had six possible sources to search for Lois Lerner’s emails:

“The hard drive would have been a source, Blackberry source, backup tapes a source, the backup tapes for the server drives and then finally the loaner lap tops.”

When asked how many of these sources the IRS searched, Camus says was unable to say for certain whether the IRS had searched any, although he acknowledged it appears the agency did search Lerner’s hard drive:

“We’re not aware that they searched any one in particular. They did – it appears they did look into initially whether or not the hard drive had been destroyed, but they didn’t go much further than that.”

The agency’s refusal to conduct due diligence in its search for Lerner’s emails meant that 1,000 emails were not found until TIGTA searched backup tapes. When asked why the IRS did not give these emails to Congress, Camus said it was because the agency never looked for them in the first place:

“To the best we can determine through the investigation, they just simply didn’t look for those emails.”

Commissioner Koskinen stated that the IRS took “extraordinary efforts” to recover any emails, but this is clearly not the case. Years after the investigations into the Lois Lerner targeting scandal began, the agency’s unprecedented obstruction has meant Americans are no closer to the truth.