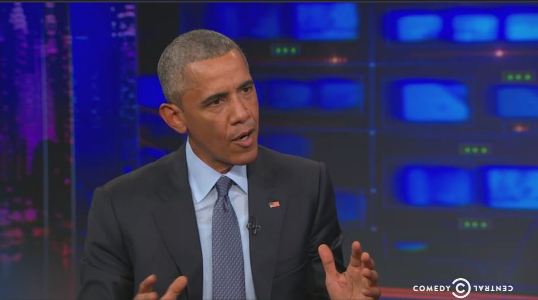 President Barack Obama outrageously denied there was anything scandalous about the IRS-Tea Party controversy, in his Tuesday interview on The Daily Show, as he lectured Jon Stewart that: “When there was that problem with the I.R.S. everybody jumped, including you....you got this back office and they’re going after the Tea Party. Well it turned out no.”

Obama went on to assert “the truth of the matter is there was not some big conspiracy there.” Obama was never challenged by Stewart on this dodge despite the recent bombshell news that Lois Lerner had a meeting with the Justice Department and the FBI to target Obama opponents.

While all Big Three (ABC, CBS, NBC) network morning shows, on Wednesday, offered glowing coverage of Obama’s sitdown with Stewart, not one of them picked up on Obama’s scandal denial.

CBS This Morning’s Vladimir Duthiers offered the most nostalgic, sentimental coverage when he reminisced, “Like two old friends just enjoying each other’s company, Tuesday night, Jon Stewart and President Obama both reflected on the approaching conclusion of their careers.”

The I.R.S. portion of the video begins after the end of the 7:06 mark. Fast forward or let it play to see second part.

The following is the relevant exchange from the July 21 interview as it was shown on Comedy Central’s official The Daily Show website:

BARACK OBAMA: When there was that problem with the IRS everybody jumped, including you.

JON STEWART: What happened with the I.R.S.?

OBAMA: Look, look, you got this, you got this back office and they’re going after the Tea Party. Well it turned out no. Congress had passed a crummy law that didn’t give people guidance in terms of what it was they were trying to do. They did it poorly and stupidly. But that becomes, but, but -

STEWART: Wow! You really only do have a year left. That’s unbelievable! Throwing it out there.

OBAMA: But hold on Jon - this is important. But the truth of the matter is there was not some big conspiracy there. They were trying to sort out these conflicting demands. You don’t want all this money pouring through non-for-profits but you also want to make sure that everybody is getting treated fairly. Now the real scandal around the I.R.S. right now is that it has been so poorly funded that they can’t go after, they can’t go after these folks who are deliberately avoiding tax payments. And the real scandal is a tax code where multinationals can pay zero taxes making massive profits.

So we tend to get distracted by the fact that there are going to be elements - because government is a human enterprise - where somebody somewhere is screwing up at any given time. Because it’s a huge system. Overall it works really well to help a lot of people. What is scandalous is the fact that we are not making as much progress as we should on the basic things we know government should be doing. Rebuilding our infrastructure, rebuilding our roads, rebuilding our ports. Setting up a smarter system for distributing energy.