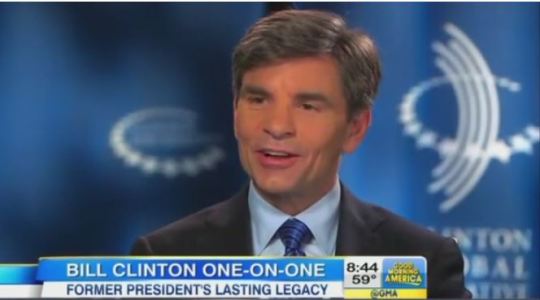 George Stephanopoulos may be in trouble right now for donating cash to the Clintons but for years he’s been giving in-kind contributions, in the form of on-air praise and suck-up questions to them in his time as anchor of Good Morning America and host of This Week.

In a 2007 interview with former President Bill Clinton about the Clinton Global Initiative, Stephanopoulos asked if his old boss worried that he might be become better remembered as the “philanthropist who happened to be President.” He also gleefully wondered if Bill's old slogan of “buy one, get one free” was still in effect if Hillary were to win the presidency as he pressed: “Is it more true now than it was then?”

Stephanopoulos has also, not-so-subtly, pressed guests from Nancy Pelosi to Supreme Court Justice Sonia Sotomayor about the prospect of a female president. And, of course, in 2008 he called a potential Barack Obama/Hillary Clinton team-up the “dream ticket.”

The following are just a few examples, from the MRC archives, of Stephanopoulos praising the Clintons from his ABC News perch:

Stephanopoulos to Bill: You Might Be Remembered More For Being a Philanthropist, You Okay With That?

“There was this great story in The Atlantic this month about your philanthropy, the CGI [Clinton Global Initiative] and your other activities at the foundation. And the author says you're basically re-inventing philanthropy, or trying to re-invent philanthropy....He writes that, ‘as a result of this, history may remember Bill Clinton as the philanthropist who happened to be President.’ You okay with that?”
— ABC’s George Stephanopoulos to his former boss, ex-President Bill Clinton, on This Week, September 30, 2007.

“His Clinton Global Initiative is happening right now in New York, bringing together prime ministers, business leaders, Hollywood stars, all signing up for public service projects. And we spoke about the difference those projects are making, and watch for a possible clue about his grandchild to come....Re-imagining the world and taking action. Something important for the soon to be grandfather-in-chief who seemed to give away a little secret. I know you’re on grandfather watch, getting close. What’s the biggest thing you want to teach your new grandchild?....That feeling fuels his initiative. Which has ‘has improved the lives of more than 430 million people so far.…Over 2900 projects and programs in more than 180 countries. CGI has a simple mission, ‘turn ideas into action.’”
— ABC’s George Stephanopoulos on Good Morning America, September 24, 2014.

Stephanopoulos to Bill: If Hillary Wins is It Still “Buy One Get One Free?”

George Stephanopoulos: “You’re also back on the campaign trail now, and a phrase from 1991 is about as resonant as ever.”
Clip of Bill Clinton from 1991: “I always say that my slogan might well be, ‘Buy one, get one free.’”
Stephanopoulos: “Is it more true now than it was then?”
— Question posed to Bill Clinton, ABC’s This Week, September 30, 2007.

Stephanopoulos to Bill: Are You “Excited” About Hillary’s Project?

“One of the biggest commitments here, at CGI this year, a big project, $1.5 billion to help fund women entrepreneurs all across the world. And Secretary Clinton also announced her big project to kind of track how women are doing around the world. Is that the project you’re most excited about this summer?”
— ABC’s George Stephanopoulos to Bill Clinton on Good Morning America, September 29, 2013.

George Stephanopoulos: “Everyone remembers that picture, seeing you up at the podium, first female Speaker of the House. Do you ever think what it would be like to be standing at that podium as the first female President of the United States comes up to give the State of the Union?”
House Speaker Nancy Pelosi: “Wouldn’t that be exciting to have the woman as the President and a woman as the Speaker of the House?”
— ABC’s This Week, May 20, 2007.

Is President Hillary the Cure for American Sexism?

George Stephanopoulos: “And on a Supreme Court dominated for generations by men, she’s now one of three female justices. We talked about the difference a woman judge makes, justice makes. [to Sotomayor] Do you think a woman president would make a big difference?”
Supreme Court Justice Sonia Sotomayor: “Oh, probably at least in some little girl’s perceptions of herself. And that is important enough.”
— Recorded interview shown on ABC’s This Week, June 22, 2014.

“And this is still on the table, the dream ticket. I mean, and I think one of the things they’re going to be talking about today is how hard does she [Hillary Clinton] push with her 17 million votes for that place on the ticket?...I think it’s the best ticket for the Democrats. I think if Barack Obama picks her, they have the best chance of winning.”
— ABC’s George Stephanopoulos, a top official in Bill Clinton’s first presidential campaign and first administration, on Good Morning America, June 3, 2008.

George Stephanopoulos: “You use the phrase ‘politics of personal destruction,’ you say you’ve been scrutinized by Democrats and I know you probably don’t like this comparison, when I hear those phrases I think of President Clinton. [Do] you feel more of a kinship now with him given what you’ve been through?”
Representative Tom DeLay (R-TX): “Not at all. President Clinton broke the law, he lied to a grand jury. I have not done anything against the law.”
— ABC’s Good Morning America, April 5, 2006.

George: It’s Going to Be Hard to Top Bill’s Speech

George Stephanopoulos: “A night of perfect political choreography. The only problem Barack Obama has right now, and it’s a high-class problem, as Bill Clinton used to say, is can he top what happened tonight?”
Host Terry Moran: “An extraordinary series of speeches [by Bill Clinton and Joe Biden].”
— ABC’s Nightline on August 27, 2008.

“It was very candid, there’s no question about it, a lot of personal revelation there.”
— ABC’s George Stephanopoulos, a former Clinton White House aide, discussing Bill Clinton’s new book on the June 21, 2004 Good Morning America.