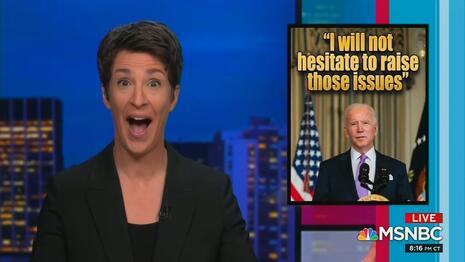 Alluding to the fact that the Biden administration was her dream come true, the incredulous host asked her audience to “pinch” her, in order to wake her up — she then, without hesitation or embarrassment, visibly pinched herself on live television. The ostentatious host lamented — without evidence or example, of course — that the Trump administration “just stopped doing everything.”

Barely able to conceal her excitement or pride for her Democrat friends, she continued:

“But, now, apparently we are going back to the way the government works. That's a U-ey. That is a one eighty, back to the idea of a functioning government, not to mention the fact that what the new Secretary of State, Secretary Blinken, is talking about here is our new president, Joe Biden, calling the president of Russia and giving him a shove for once on a whole bunch of things.”

Maddow obsessed over the fact that Biden said he “won’t hesitate” to raise issues with Russians. Since Biden made literally one call to Russia’s Vladmir Putin, Maddow proclaimed that the United States was no longer a “sucker government.” She then excitedly declared that America now has both a “functioning government” and “functioning president.”

Of course, there was no mention of whether Biden would or would not “hesitate” to raise issues with China. Nor was there any mention of the various actions former President Trump took against Russia.

Maddow then went on to blame journalists and fellow Americans for the technical atrocity that was the Biden administration’s first remotely conducted COVID response briefing. “There was so much interest from so many journalists trying to attend,” claimed Maddow, “that they maxed out the number of attendees that could be part of this remote briefing — there were technical difficulties.”

“It is as if [members of the Biden administration] are using the power and reach of the U.S. Government to communicate with the public and the press about our nation's policy challenges and what the government is trying to do about those challenges,” Maddow happily announced. “I don’t even know what to do with myself,” she exclaimed.

Maddow's sycophantic gushing was sponsored, in part, by Noom. You can contact this advertiser, and others, via the Media Research Center’s Conservatives Fight Back page conveniently linked here.

RACHEL MADDOW: One of the things that happened at the State Department over the past four years, under the previous president, is that they basically stopped talking to the public or the press. I mean, at the U.S. State Department the usual practice going back to the 1950s was regular, almost always daily press briefings. Under the last president, they just stopped doing that without ever explaining why. And it's a weird thing. Right? I mean, this is the part of the U.S. Government that's responsible for diplomacy, for the United States of America promoting its interests and getting America's way in the world by persuasion. Right? By argument. By diplomacy. By talking other people and other countries into our way of seeing things. But under the last president they just decided they would stop talking, they would stop trying to make a public case for what they were doing.

MADDOW: Newly sworn-in Antony Blinken, today, briefing from the State Department and taking questions from reporters on the first day on the job and giving them straightforward and in some cases necessarily complex answers. Which amounts to a radical departure from the way the U.S. Government was run over the past four years. Just by virtue of the fact there's reporters there and allowed to speak and here's government officials taking questions of what the government is doing and what its priorities are. I mean, that's the standard we had for generations—before Trump. Under the Trump administration they just stopped doing everything. But, now, apparently we are going back to the way the government works. That's a U-ey. That is a one eighty, back to the idea of a functioning government, not to mention the fact that what the new Secretary of State, Secretary Blinken, is talking about here is our new president, Joe Biden, calling the president of Russia and giving him a shove for once on a whole bunch of things.

MADDOW: “I will not hesitate to raise those issues with the Russians.” Pinch me. A weird thing about the previous president and Russia, there were so many weird things, but one weird thing about it for, we, the public and those of us who work in the news business is that over the past four years every time President Trump spoke with Russian President Vladimir Putin, every time that we know of, we would learn about them having a conversation from the Kremlin. It would be the Russian government that told us that they had had a call or meeting.

Every single freaking time. It was Russia that provided the first information, sometimes the only information, about communications between our president and theirs. Which means and meant for four years that Russia always got to put their spin on what exactly happened in those many, many contacts between our two presidents. Under president Trump, Russia would always get to announce the call or the meeting, they would therefore get to put their spin on what happened in that call or that meeting and then the U.S. Government would go second, would go after them and never contradict the Russians' take on what happened. Just go along with whatever they said.

That's what it's been like for the past four years but hello, new president. That's apparently not how we're doing that anymore. That clip that I just showed of President Biden, that was President Biden on Monday telling the press, telling the American public in advance that he was about to have a call with Russian President Vladimir Putin, and that on that call he intended to talk with him about a whole bunch of things that Russia has done to attack us or things that we otherwise really don't like about their behavior.

He says, “I will not hesitate to raise those issues with the Russians.” And, yesterday, just as he said it would, that call between Biden and Putin happened. President Biden’s first call with an adversarial foreign leader. And this time we didn't have to learn about it from the Kremlin, first. This time we learned about it from our own government, first. Not only did we get that word in advance from the president that it was going to happen, but when the call happened the White House press secretary provided a summary of the discussion at the White House press briefing, which, hey, is a thing that happens every day now.

Wow. And then, in addition to that verbal summary of what happened on the call, our government provided a formal written readout of the call which says that President Biden raised a number of matters of concern with Vladimir Putin and I'll tell you advance, the Kremlin put out their own readout of the call between Biden and Putin in which they mention none of these matters of concern. In the Kremlin readout, they made it sound like Biden just called Putin to talk about economic cooperation and mutual feelings on trade and kissy-kissy, everything that's fine. That’s the way the Kremlin likes to characterize these discussions between the Russian president and the American president. That’s what they did for four years with every conversation with Trump, and the U.S.

Government let them say whatever they want, took a backseat, never contradicted them, never put out our own take on the call. But since we are no longer that sucker government because we are no longer being told as the American public that we need to take the Kremlin's word for what happened in these calls, since we now have a functioning government and a functioning U.S. President that doesn't act like he's working for Russia instead of for the United States, we know—from our own government, now—that Biden pressed Putin on all this stuff and it wasn't all just talk about mutual feelings and cooperation.

MADDOW: So, after a four-year interregnum, the State Department does daily briefings now again and after a four-year interregnum, the White House does daily briefings, again, now. Today, we got a briefing not only from the White House press secretary but from the Biden administration's COVID response team. Direct briefing from Jeff Zients, the COVID response coordinator for the Biden administration and also Dr. Anthony Fauci, and the new director of the CDC and other officials as well. The problem with this COVID briefing for the public, today, was actually that there was so much interest from so many journalists trying to attend, that they maxed out the number of attendees that could be part of this remote briefing—there were technical difficulties. Presumably, they will work those out, though. They will have to, because they said they are going to do these COVID briefings—with the scientists answering on their own terms without the president breathing down their neck. They’re going to do these briefings on COVID for the public every other day, now—from here on out. Today’s Wednesday, they did the first one today. Hopefully they’ll work out the technical kinks because the next one is on Friday.

Today, on climate, the president's global climate envoy, former Secretary of State John Kerry and President Biden's domestic climate czar, the former EPA administrator, Gina McCarthy, they did a public press briefing, too. I mean, after the past four years, this is, like, almost hard to get used to. It’s, it is as if they are using the power and reach of the U.S. Government to communicate with the public and the press about our nation's policy challenges and what the government is trying to do about those challenges. Shocking. They're saying what the government is trying to do and why they're trying to do it.

They're putting out, at the podium, the people in government working on these things. So they can explain in their own terms what it is they're doing and why the government is approaching it this way, and then those people are taking questions from the press about it. All the time. Multiple times per day. Already. I don't even know what to do with myself. This was apparently, absolutely, impossible for the previous administration because they were so busy, what? But we are one week into the new presidency and here we are. Keep up. Your government wants you to know what they're doing.