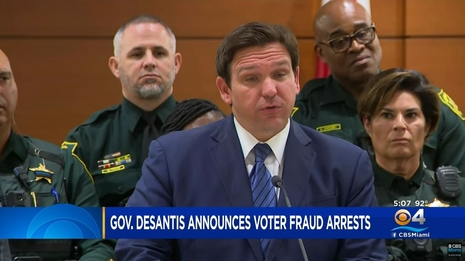 In an editorial for Tuesday’s print edition, The Washington Post screeched over an announcement last week from Governor Ron DeSantis (R-FL) that, as per a release from his office, 20 people were arrested for having “[broken] Florida’s elections laws” despite having been banned from voting for having been convicted of either murder or sex crimes.

The Post’s argument? Such a measure to protect our elections systems “will have a chilling effect” on our democracy. To put this another way, The Post is so deranged and hates conservatives so much that, in order to oppose them, they’ll go to the mat for murderers and sex offenders.

The piece began by lamenting the event announcing the charges “felt like a rally for an unannounced 2024 presidential campaign” and that the charges themselves were “a clear effort to deter legitimate voting.”

But again, it was against the law for these convicted felons to vote.

“Mr. DeSantis says he came up with the 15-person Office of Election Crimes and Security to make sure anyone who isn’t allowed to vote gets prosecuted if they try,” they added.

The Post explained that their gripe derived in part from the fact that “the tiny number of cases brought so far underscores the paucity of voter fraud” and excused away the actions of the defendants due to what they speculated was some confusion:

A 2018 ballot initiative amended the Florida constitution to give formerly incarcerated felons the right to vote, but it excluded anyone convicted of murder or sexual assault. Mr. DeSantis says all 20 of the arrested voters fall into this category. His announcement would carry more credibility if the governor had faithfully followed the clear will of Florida’s voters. Instead, he undermined it, signing a law in 2019 that moved the goal posts by requiring felons to pay off any money owed in fines and fees before registering to vote, with the punishment for not doing so being another felony.

But the system remains so opaque that there’s no easy way to find out whether you owe fees or fines stemming from a past conviction. There’s no centralized tracking system for either citizens or elections officials to check. All 67 counties and various state agencies maintain their own databases.

Perhaps they mistakenly believed that the 2018 ballot measure permitted them to register.

Another grievance? The fact that “most were from the heavily Democratic counties of Palm Beach, Broward and Miami-Dade” so as to make it seem like it’s only a problem for one side of the aisle.

They closed out by repeating their claim that Sunshine State voting will be hampered by fears of committing voter fraud: “More significant is the chilling effect this will have on formerly incarcerated people who legitimately have the right to vote but may now be afraid to take the risk[.]”