While the left has been hellbent on ostracizing and denigrating crisis pregnancy centers with few attempts from their media allies to portray them in a positive light (outside of this piece from Jan Crawford on CBS Mornings), it’s been left to outlets such as our sister site CNS News to cover both what these centers have experienced over recent months and especially since Roe v. Wade’s overturning on June 24. 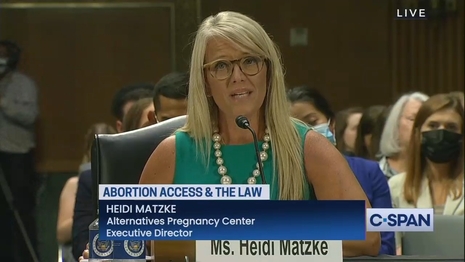 Senior editor Melanie Arter had the first of two stories on Tuesday the liberal media refuse to do in “Pregnancy Care Center Director: We’ve Been Forced to Spend Up to $150K Just to Protect Ourselves.”

Arter reported on the plight of Alternatives Pregnancy Center, a Sacramento, California pregnancy center profiled in a wild Senate Judiciary Committee hearing thanks to their director, Heidi Matke:

The director of a pregnancy care center in Sacramento, Calif., said Tuesday that her she has had to spend $150,000 in “valuable resources” to protect themselves from violent assaults and vandalism, including someone armed with a machete, in the wake of the Supreme Court’s decision to overturn Roe v. Wade.

“Just last week, as the exhibit shows, a man approached our care center with an armed machete. We have been forced to hire 24-hour on site security. We’ve had to reinforce doors and bullet-proof our walls. We’ve had to paint our building with anti-graffiti coating. We’ve added cameras, armed our staff with pepper spray and stopped running our mobile clinic, because of threats of violence,” she said.

A few hours later, CNS News intern Janey Olohan filed a story on one of the more recent examples of violence against two crisis pregnancy centers in Worcester, Massachusetts.

In “Mass. Crisis Pregnancy Center Vandalized, Calls on State Officials to ‘Publicly Condemn Domestic Terror Attack,’” Olohan said two centers were hit with what “the head of one of them is calling...‘domestic terrorism.’”

“Both Clearway Center and the nearby Problem Pregnancy clinic were hit. Glass doors and windows were smashed in, paint was splattered, and the entrances to the clinics were spray-painted in black with the words, ‘Jane’s Revenge,’ the name of a radical pro-abortion group, which has yet to publicly claim responsibility for the attacks,” Olohan added.

Olohan noting that, dating back to the leak of the Dobbs opinion in May, Susan B. Anthony Pro-Life America has documented “at least forty-five violent assaults on pro-life-affiliated groups.”

To read more from these stories, click here for Arter’s story and here for Olohan’s.