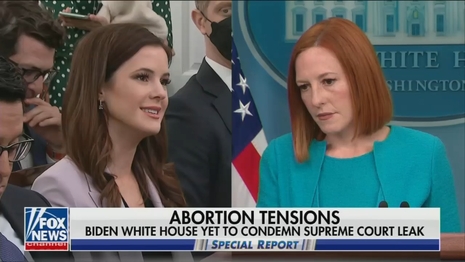 Filling in for Fox’s A-Team of Peter Doocy and Jacqui Heinrich, correspondent Alexandria Hoff joined The Psaki Show on Monday and Tuesday, as Jen Psaki began her final week at the podium, and Hoff made it count by joining other reporters in grilling her on the threats to Supreme Court justices due to the leaked draft opinion on abortion.

And in doing so, Hoff drew out answers from Psaki that repeatedly endorsed the harassment and intimidation of the justices and their families.

Starting with Tuesday, Hoff called out the Biden administration’s double standard when it comes to what they claimed were threats to the lives of school board members as “the Department of Justice was very swift in responding” and whether they’ll do the same toward (actual) threats to Supreme Court justices like Samuel Alito.

In response, Psaki predictably claimed Biden opposes “violence, threats, and...intimidation of any kind,” but then droned on about how Republicans are raging hypocrites when it comes to (alleged) school board threats, Michigan election officials, women seeking abortions, or January 6. Interspersed with that, Psaki said the administration “continue[s] to encourage” such protests and intimidation tactics.

Hoff noted this concerns “a pending court case” with a “federal law” prohibiting these protests, but Psaki wanted to make it all about Republicans (click “expand”):

HOFF: Does the President feel that the demonstrations outside of, say, Justice Alito’s home — are those attempts to interfere or intimidate?

PSAKI: Well, I think I said yesterday, but I’m happy to repeat because I think it’s important for everybody to hear, that the President’s longstanding view has been that violence, threats, and imitat- — intimidation of any kind have no place in political discourse and we believe, of course, in peaceful protest. What I do find is interesting, and I think most — many people have noted, is that there are voices on the right who have called out this — protests that are happening — while remaining silent for years on protests that have happened outside of the homes of school board members, the Michigan Secretary of State, or including threats made to women seeking repo- — reproductive healthcare, or even an insurrection against our Capitol. So I know that there’s an outrage right now, I guess, about protests that have been peaceful to date — and we certainly continue to encourage that — outside of judges’ homes.  And that’s the President’s position.  But the silence is pretty deafening about all of the other intimidation that we’ve seen to a number of people.

PSAKI: Well, but I think that intimidation and protests — and intimidation outside of the homes of school board members, the Michigan Secretary of State — you know, intimidation and threats against people seeking legal reproductive healthcare — and against our Capitol and American democracy also warrant some outrage and we haven’t really seen that.

The Washington Post’s Ashley Parker returned to that a few minutes later and wondered if the White House is “worried that abortion rights protests may turn violent.”

Psaki defended the mental terrorizing of justices and their innocent families, boasting that “the protests...have not turned violent” and “[j]ust because people are passionate” and “fearful about their own healthcare,” “it does not mean they’re violent.”

Parker also invoked messages left outside the home of Senator Susan Collins (R-ME) and whether that’d be considered vandalism, but Psaki retreated to “the hypocrisy of the silence” from Republicans who, as per Psaki, have refused to condemn violence against liberals.

Going back to Monday, Hoff inquired as to whether Biden would “condemn the leak of the Supreme Court draft opinion or the doxing of the justices, now that we’ve seen violence unfold.”

Psaki insisted Biden has opposed threats, vandalism, and violence and took Hoff’s question as to having meant violence against justices took place when it took place elsewhere (which was what Hoff likely meant):

We have not seen violence or vandalism against Supreme Court justices. We have seen it at Catholic churches. That’s unacceptable.  The President does not support that. We have seen it at some conservative organizations.  That — we don’t support that and we certainly call for — we know the passion. We understand the passion. We understand the concern. But what the President’s position is is that that should be peaceful — the protests. But continue.

The AP led off Monday’s briefing with Will Weissert citing the Virginia law “that actually prohibits protests outside private residence, even when done peacefully,” but Psaki ducked that fact by insisting the White House is “certainly not suggesting anyone break any laws.”

The Daily Mail’s Geoff Earle had an interesting train of thought as he posed to Psaki the possibility that the White House views the protests outside the homes of justices as “productive.” Psaki said it’s “not for me to speak to” whether they’re “productive” though she did give an endorsement to such intimidation, emphasizing they “support...people peacefully protesting” (click “expand”)

EARLE: You were unequivocal in condemning the violence. But as you know, there’s also some allies who are protesting outside justices’ homes, including Brett Kavanaugh, who — if there’s any kind of a compromise — conservative ruling that preserves some of Roe, he could be part of that with Roberts. So, my question is: Is it appropriate to protest outside people’s homes? And is it productive or not productive?

PSAKI: Look, I would say, in terms of the productive question, that’s not for me to speak to. Obviously, these justices make decisions as an independent body.  How they are influenced or if they are influenced is not for me to make a determination of. We do believe in peaceful protests. We do not believe in or support any intimidation of any kind — obviously, the violation or breaking of any law, as somebody raised before, or threats or intimidation of any individual. What we do support is people peacefully protesting. And they do that in a range of places.

EARLE: But you wouldn’t wave anybody off for tactical reasons?

PSAKI: We’re not here to give tactical advice to protesters. What we are here to call for is peaceful protest, for people not to resort to violence, to vandalism, or certainly intimidation of any kind.

To see the relevant briefing transcripts (including a whole host of enlightening exchanges on Team Biden’s “Ultra-MAGA” smear, the economy, and more on abortion), click here (for May 9) and here (for May 10).