LOL: Discovery Exec Referred to CNN+ as ‘CNN Minus’ Before Shutting It Down 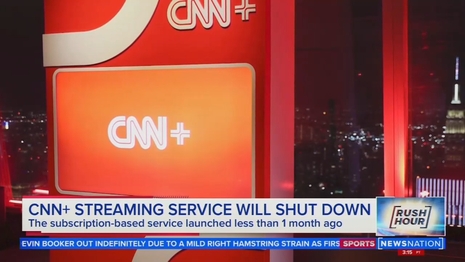 Among the revelations surrounding Thursday’s news that CNN+ was being eliminated, one came from The New York Times in that Warner Bros. Discovery JB Perrette noted many had begun referring to the failing streaming service as CNN- while in meetings with incoming CNN boss Chris Licht about its future.

And over at CNN.com, liberal media janitors Brian Stelter and Oliver Darcy relayed scenes from inside CNN’s New York hub of distraught staffers drinking and “huddling” together in “sadness.”

Times reporters Michael M. Grynbaum, John Koblin and Benjamin Mullin wrote that the “seeds of” CNN+’s “stunning and ignominious end...were planted weeks ago” thanks to CNN’s decision to launch CNN+ just prior to Warner Media’s merger with Discovery and over the objections of Discovery executives.

The Times reporters said Licht and Perrette had “convened several meetings over the past several weeks to figure out what to do with the service” in which the latter cited past streaming failures for Discovery and touted “tweets that called the service ‘CNN Minus’ because the digital outfit did not include content from the CNN cable network.”

During the company meeting in which the move was announced, Licht reportedly “compared CNN’s efforts to launch CNN+ to a builder constructing a house without being allowed to speak to the intended owner”:

Stelter and Darcy had more on the meeting, saying Perrette admitted he was perturbed by ex-CNN boss Jeff Zucker and his team for having put the network in this position:

“Some of this was avoidable,” he said, but “prior leadership decided to just keep going” with the planned March launch of CNN+ despite the impending merger, he said.

They also said one anonymous staffer “described the sentiment as ‘total and utter shock’ that morphed into despair” with people initially “freaking out” before they “turned to sadness” while “huddl[ed]” together. After which, they “broke out whiskey and wine to commiserate.”

If this were Fox Nation going under, it’s safe to say both outlets wouldn’t be so somber.