Psaki: Doocy Does ‘Sound Like a Stupid Son of a B***h’ Since He Works at Fox News 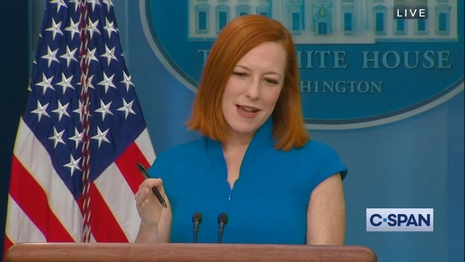 Thursday night during a taping of the Obama bros podcast Pod Save America, White House Press Secretary Jen Psaki implicitly doubled down on President Biden’s insistence that Fox News reporter Peter Doocy is a “stupid son of a bitch,” arguing he works for a network that “provides questions that...might make anyone sound like” one.

Psaki also weighed in on her tenure at the Briefing Room podium, danced around questions of when she’ll move to MSNBC. And seeing as how the press corps have decided it’s not an issue (other than a few questions on April 1) to take a taxpayer-funded salary while negotiating with an outlet that’s supposed to hold her to account, she’s clearly felt empowered to say things like that.

>> To hear the audio of Psaki discussing Doocy, click here.<<

Given the show’s audience and the voting demographics of Washington D.C., the crowd went wild in applause and laughter.

Psaki found a back-handed way of answering in the affirmative: “[H]e works for a network that provides people with questions that, nothing personal to any individual, including Peter Doocy, but might make anyone sound like a stupid son of a bitch.”

Both the crowd and co-hosts went ballistic in laughter, which gave Psaki the chance to pivot to a more diplomatic answer with a retelling of what happened on January 24 between Biden and Doocy because it was “a nice Peter Doocy story” even if it’s not “popular in this crowd.”

In retelling how Biden called him and Doocy took the high road when talking about it that night with Fox colleague Sean Hannity, Psaki mocked the notion of rising crime:

I actually watched Sean Hannity to see what he said. My mind was, like, really bending and hurting. I’m, like, there was, if you can imagine, it was like a flames and it was, like, crime, crime, crime, and Kamala Harris — and the Vice President’s, like, walking through the flames and crime — [AUDIENCE LAUGHS] — I don’t even know what was happening.

Psaki added it “was a moment of grace” by Doocy and one could say that without “lik[ing] everything [he] says and does.”

In a gag-tastic moment, Pfieffer reacted by saying the past few moments were “why, before you were the world-famous press secretary, everyone called Jen Psaki the nicest person in Washington.”

On Friday afternoon, Fox News said in a statement that “Doocy’s job is to elicit truth from power for the American public” and that not only are “his questions...his own,” but “he’s a terrific reporter and we are extremely proud of his work.”

Earlier on the podcast, Psaki falsely claimed Republicans are spending their time “doing horrible things and — and targeting transgender kids” and thus they’re people whom she doesn’t want “to be their friend.”

She then lied again, saying “a fair number of” Republicans “don’t want to talk about inflation, the economy, COVID, any of these issues because they have no plan and they have nothing to say” except “target transgender kids.”

The conversation later turned to when she would be leaving the White House and Psaki stuck to her talking points that she won’t “be there forever” even though it’s been “the best job I have ever had.”

Psaki went onto describe what the job’s been like and how she’s intended to instill “stability and calm and returning facts...and substance to the Briefing Room and following Trump and actually, in a crazy way, has been this huge honor...in stabilizing or...easing the nerves — healing the nerves of the public.”

She also gave advice for any future predecessors (click “expand”):

PSAKI: Oh, hypothetically, okay, a couple of things. One is that I mean, I came into this job thinking this, but I think it’s true even more now, we don’t have to underestimate the intelligence of the American people. People are not stupid. We do not need to talk in a way that is, like, everybody’s in kindergarten. People pay attention. We need to make things accessible. That’s also true. I believe the best people who are communicators or spokespeople are ones who are also deeply knowledgeable about the issues they’re going to talk about. It’s not about reading talking points. This is what I would say to any successor: It’s not about reading talking points. It’s — you’re not, like, a weather girl — no offense to weather girls, they’re great, they tell me the weather — but, like, it’s — it’s about being able to answer the ninth question, right? And being able to talk about things and I — I would say a number of my amazing team members are here, but I’m a little relentless at times because I want to know how to be able to explain what a javelin, the weapon is, so that people can know what it is, right? You want to know how to explain is COVID a problem? Is COVID not a problem? So, I would say that’s the second thing. The third things, which I have learned the hard way, and this is the truth — if anybody ever hasn’t been in the Briefing Room, come to the Briefing Room, whatever — it’s small and there are reporters staring at you the entire time, even when they’re not asking you questions. Sometimes, and actually, the ASL interpreter, like, the sign language — American Sign Language interpreter said this in a TV interview the other day, they’re very repetitive. These questions are very repetitive. They ask her the same question over and over again. And you have to remember, you’re not at a dinner party, you’re not at a bar, right? So, you’re not just saying to your friends, “listen, I’ve answered your question nine times,” right? You have to continue to provide the same context and information because, in the age of social media and Twitter, otherwise, even the best meaning and well-meaning reporters will take one thing you said and make you seem like you’re —

PFEIFFER: That kind of [INAUDIBLE] has no place here.

PSAKI: I know there’s a lot — we could talk about a — Twitter, all these things, but those would be my three pieces — and you know, the last thing I would say is the best thing you can do is know what the President’s thinking. I mean, that’s, ultimately, your job — is to speak on his behalf. Not on your behalf. You’re speaking for — on his behalf, what the administration thinks. If you don’t know, you don’t know and you say you don’t know and then you call up someone who knows and you’ll go give them the answer. And it doesn’t have to be a gotcha situation.

To see the relevant transcript (and more from Psaki) from the April 15 episode of Pod Save America (taped April 14), click here.