Former NYT Writer Agrees to Fox News Interview....Then Backs Out to Trash Them

On Tuesday, former New York Times cybersecurity writer and ultra lefty Nicole Perlroth tweeted what came off to her base as a beatdown of the Fox News Channel in how she declined an offer to appear on one of their shows: 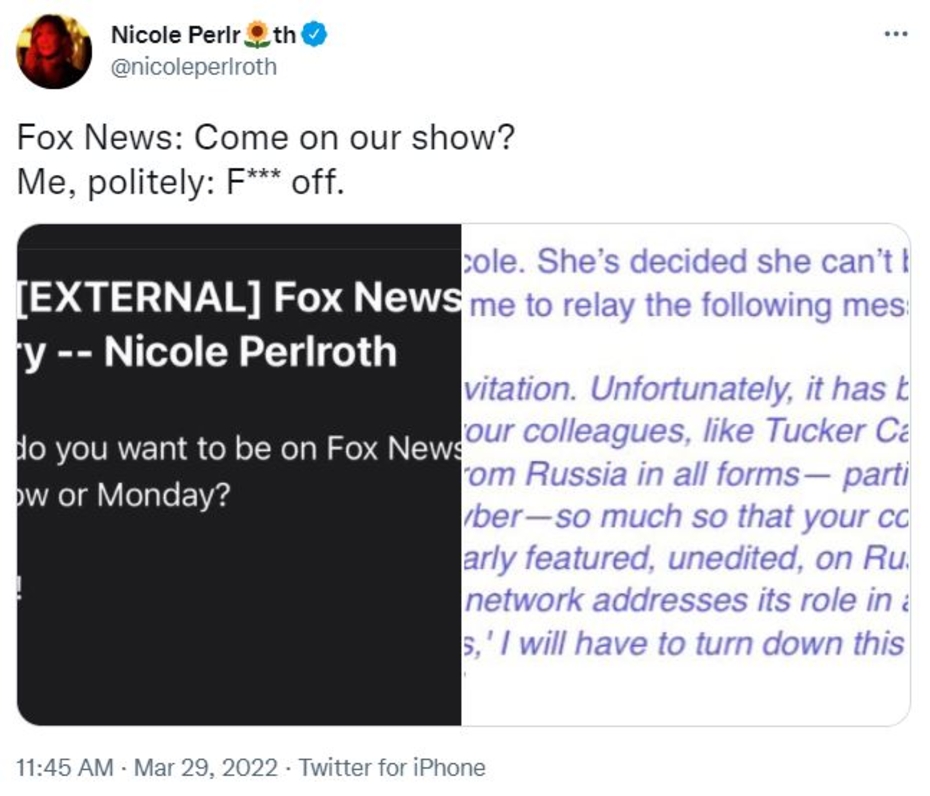 Clearly proud of herself, she reupped the same response two days later in a separate tweet.

But, like many things leftists have said and done, there was more to this story. In a series of e-mails obtained by NewsBusters, Perlroth had — through her assistant — agreed to appear on FNC and even had them go as far as negotiate a date with an FNC booker for America’s Newsroom with Bill Hemmer and Dana Perino.

The actual story began on February 24 with an e-mail from the booker that read (click “expand”):

We’ve been keeping up with Nicole’s twitter feed over the last few days, and as we continue to cover Russia’s invasion of Ukraine, we wanted to invite her on the show for an interview.  We are interested in having her expertise on cyber warfare as this is a key part of the ongoing conflict.

We are on air from 9-11a ET, and happy to have her join from a studio or via Skype.  This would be a live, four minute interview.

For a reference on Bill and Dana’s interview style, here is our segment with WH Press Secretary Jen Psaki a few weeks ago (promise Nicole’s wouldn’t be 15 minutes long!)
[DROPBOX LINK]

Let me know her availability tomorrow when you can!  Thank you

It wouldn’t be until March 14 when Perlroth’s assistant replied at 3:33 p.m. Eastern: “Apologies for the delayed response. Nicole is interested in speaking with Bill Hemmer and Dana Perino if they still want to have her. Let me know.”

Major yikes! On count one, we find the defendant guilty of having pants on fire credibility!

But like those As Seen on TV ads, there’s more.

By the next morning, the FNC booker e-mailed an offer for either of the subsequent two days (March 16 or 17), but the chain went cold.

After a second attempt on March 16 from the producer (“circling back here”), Perlroth’s assistant resurfaced six hours later: “Unfortunately, Nicole is not available this week during that time. She would love to be considered for future opportunities. Thank you[.]”

“[W]ould love to be considered for future opportunities?” That sure didn’t sound like someone who thought the network was embarrassing and stocked with Putin stooges.

The FNC booker attempted to reconnect on March 23, giving Perlroth the option of either March 25 or 28.

By March 24 at 4:36 p.m. Eastern, Perlroth’s assistant sent the reply that would then be tweeted by the former journalist for her liberal peanut gallery to gush over.

It’s one thing to have a change of heart, but it’s something else entirely to have your assistant commit not once but twice and then not only back out, but do so in that fashion.

Confused as most people would, the FNC booker replied less than an hour later: “That’s fine, I’m just confused as to why a week ago you communicated that she was interested in speaking with two different anchors. Cheers[.]”

As evidenced by the NewsBusters headlines below about her work with The Times, Perlroth is a standard, reliable leftist: