INSANE WashPost Editorial: GOP Were WORSE on Jackson Than Dems on Kavanaugh 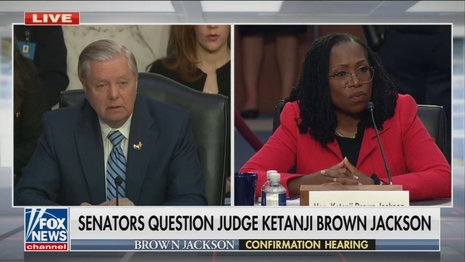 For anyone in the news business who wants to convince people that their profession isn’t the enemy of the people, they need to address things like Thursday’s lead editorial in The Washington Post. In 515 words, they had the gall to claim Biden Supreme Court nominee Judge Ketanji Brown Jackson was treated worse by Republicans in her confirmation hearings than what Democrats did to now-Justice Brett Kavanaugh.

Nevermind that the tall tales of gang rape against him didn’t have a single corroborating witness, a date for when they happened, where they happened, or even definitive proof other than esoteric claims from Christine Blasey Ford and even more deranged claims from Deborah Ramirez, Julie Swetnick, and an unnamed person who reported a tall tale to Senator Sheldon Whitehouse (R-RI).

The Post was blatant in its absurdity right from the headline: “Republicans boast they have not pulled a Kavanaugh. In fact, they’ve treated Jackson worse.” Seeing as how The Post itself are one of the so-called fact-checkers, they’ll conveniently avoid scrutiny from that crowd.

It began with pure gush: “Jackson has been a model of composure, which is made all the more impressive by the egregious behavior of some on the Republican side.”

Reminder: Kavanaugh was asked about his sex life and whether there was something nefarious behind “boofing,” which was a synonym for farting.

The Post cut to the chase with invective for Senator Lindsey Graham (R-SC) for reminding Jackson and those listening of what happened to Kavanaugh, claiming that he “and a handful of other Judiciary Committee Republicans have handled themselves worse.”

Hilariously, they added it’s the truth based on “the most relevant measures.”

Speaking of truth, it was still in short supply as The Post insisted Kavanaugh was “credibly accused,” so “Democrats rightly asked the committee to investigate.”

The editorial then suggested the process was rigged, calling the FBI investigation “superficial” and thus allowed Kavanaugh to escape despite having “behaved intemperately, personally attacking Democratic senators and revealing partisan instincts that raised questions about his commitment to impartiality.”

As many wondered at the time, one has to ask those who screeched about Kavanaugh’s reactions to these lies how they would feel if they were accused of horrific crimes. Afterwards, our friends at The Federalist put together 61 questions for Ford that weren’t asked.

Moving to the present, they saw Jackson being asked about her time on the bench as beyond the pale (click “expand”):

By contrast, Republicans have smeared Judge Jackson based on obvious distortions of her record and the law. Mr. Graham and others painted her as a friend of child pornographers, despite the fact that her sentences in their cases reflect the judicial mainstream. Even conservative outlets had debunked these accusations before the hearings began. The more Judge Jackson argued for rationality in criminal sentencing — or attempted to, as Mr. Graham continually interrupted her — the more Mr. Graham ranted about the evils of child pornography, which Judge Jackson had already condemned repeatedly and her record plainly shows she takes seriously.

Sen. Marsha Blackburn (R-Tenn.) used much of her time assailing those concerned about transgender people. Sen. Ted Cruz (R-Tex.) attacked Judge Jackson for sitting on the board of Georgetown Day School, a D.C. private school, because he disapproves of its anti-racism curriculum, which Judge Jackson has never endorsed, let alone relied upon in a ruling.

But on the issue of antiracism and Critical Race Theory (CRT), Jackson has praised Derek Bell — the man many see as the creator of CRT — has himself referred to avowed racist Louis Farrakhan as “a great hero,” said the Constitution was “roach powder” and feared a “racial genocide” by white people.

Back to The Post, they also lied about Jackson’s connection to far-left dark money groups as they insisted “she has no connection to them” and thus “underscored” how Republicans “had little substance...to criticize here.”

Along with having promoted her as early as September 2020, Jackson was prepped for the hearing by Biden senior counsel Paige Herwig, who was previously deputy chief counsel for the far-left group Demand Justice, which has worked extensively to promote her (as well as having badgered Stephen Breyer to retire).

The Post closed by arguing that while “neither side is blameless in the politicization” of Supreme Court picks, it’s the “clownish” Republicans who’ve “done the most damage” (click “expand”):

Not all Judiciary Committee Republicans went off the rails. Sen. Ben Sasse (Neb.) questioned her respectfully on the originalist philosophy of judicial interpretation. Others posed questions about substantive due process, the doctrine under which the court has established rights not explicitly enumerated in the Constitution. Sen. Charles E. Grassley (Iowa) congratulated the Democrats on running a fair hearing. Throughout, Judge Jackson gave thoughtful — if not particularly revelatory — responses.

Unfortunately, their colleagues’ antics distracted from their more productive questioning, and from what should have been the order of the day: recognizing the historic nomination of the first Black woman to sit on the Supreme Court and using the opportunity to probe thorny legal questions in good faith.

Neither side is blameless in the politicization of the confirmation process. But, particularly after they iced out then-Judge Merrick Garland in 2016, Republicans have done the most damage. The clownish performances by Mr. Graham and others continue them on that trajectory.

Exit question: Do these people actually believe this or did they decide to write this to please their base?