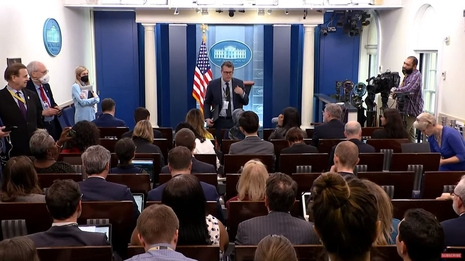 On Monday afternoon, after the White House press briefing, the Briefing Room became the site of a robust and, at times, extremely heated debate about who gets to ask questions and how many as, thanks to longstanding power bestowed on the AP reporter slot, the Q&A portion of the briefing only lasted about 39 minutes.

A dozen reporters in the first two rows were able to question Jen Psaki, but those in the remaining five rows and standing in the back or along the sides of the room didn’t have their go after the AP’s Josh Boak pulled the plug. Through a source, NewsBusters was able to obtain the full, unedited audio of the debate and, to hear it, click here.

The squabble began when the New York Post’s Steve Nelson shouted out to Boak, that “you don’t have to call the briefing over” since “we had questions back here.”

Al Jazeera’s Kimberly Halkett also spoke up, repeatedly noting the fact that five entire rows were ignored and, once she said that, longtime Chicago Sun-Times reporter Lynn Sweet joined in: “Yeah. Why did you call it? Why? Why did you do it?”

While the audio was unable to make out Boak’s full, initial answer, he suggested that time flies and some reporters were pressed for time, which led to the trio to slam Boak’s unilateral decision (click “expand”):

HALKETT: Okay. Well, if you had an out, why didn’t you guys limit it yourselves to one topic?

SWEET: Right. If you agree on the out, why don’t you organize yourselves on what — how you conduct yourselves during the briefing?

BOAK: Look, Lynn, if you want to yell at me, feel free to come in the booth and we can do that there.

SWEET: No. It’s a discussion. No one’s yelling.

HALKETT: This — this involves everybody.

NELSON: Your decision ended the briefing for the rest of us. 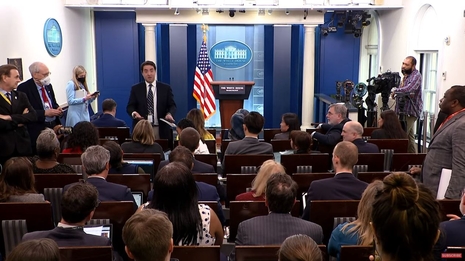 White House Correspondents Association president and CBS News Radio correspondent Steven Portnoy stood up to insist it’s been this way for “decades for a senior wire reporter to conduct the briefing and end it when we feel we’ve had enough.”

Portnoy stated the obvious that this didn’t happen on Monday and, going forward, suggested that “it might be appropriate” for the rest of the room to work together to “send” a “signal...to the AP man or woman, so that he or she could signal to the press secretary that we have had enough.”

Sweet tried to be collegial by saying “everyone’s trying here,” so perhaps it’s time to “figure out a sense of equity” while still allowing the leading reporters to “ask a lot of the general questions.”

Portnoy admitted the “responsibility” of having more people get questions “falls to...each one of us who gets recognized,” but Halkett said she’s raised that concern “for four years,” only to have nothing happen.

Someone shouted out a question of only one question per reporter, but Portnoy replied that he’s “not going to tell anyone else how to do their job” as he wasn’t “elected” to do that and “[t]his is all about making sure that the public is represented with a variety of questions,” and even “well-served by going to the back of the room.”

Newsmax’s James Rosen then suggested “they ought to just kill out the back three rows...because they’re not going to get called on” and turn the White House Briefing Room setup to resemble that of State Department briefings because it's more spacious versus “[c]ramming us all in here for us to serve as potted plants.” 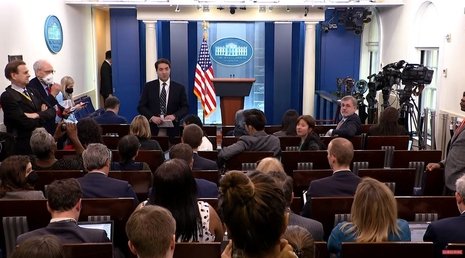 Portnoy tried to smooth things over, saying they’re engaged in “an important exercise...to ask questions on behalf of the public, our respective audiences, whether they are on cable television or on the internet or on radio or only on Twitter.”

In terms of a solution, Sweet proposed that “the time-honored tradition” started by Helen Thomas go away in favor of letting the White House decide, but Portnoy seemed mum on jettisoning this elitist tradition because, apparently, “that is something that is up to the White House to decide.”

Boak eventually came back to defend himself and promised to do better. Needless to say, it didn’t go well (click “expand”):

BOAK: Look, here’s — here’s what I can tell you is standard. Most briefings are 45 minutes. I think everyone should get a question. As the AP reporter, I will do whatever I can if you have a question to make sure it gets asked. If I — if it doesn’t happen today, I’ll do it later. I volunteer. I make that commitment. This briefing today was 43 minutes, a little bit over that. If it was up to me, coulda gone on all day.

NELSON: Wasn’t it up to you?

NELSON: Was it not up to you then?

BOAK: Time out. Cause I’m also respectful of other people’s schedules in order to ensure that other reporters outside the briefing room —

NELSON: Then who made the decision if not you?

Again refusing to commit to moving away from making the AP reporter judge and jury, Portnoy stated that Psaki’s “made a conscious decision to try to honor the long-standing traditions of the room” since “the people before [her] [had] a different view.”

This was a swipe at press secretaries for then-President Trump.

Skipping ahead a few minutes, Rosen stepped up to end the debate and do so with class (click “expand”):

ROSEN: Can I make one last? Steve, I think we all are very grateful for your leadership of the WHCA —

ROSEN: — and the role the WHCA plays.

AFRICAN-AMERICAN CHRISTIAN REPORTER: I am.

ROSEN: I think that we all recognize that, as adults, that we more or less get the briefing that the briefer intends for us to have. Okay. I think to Lynn’s point, the only thing I would take issue with what you have said to date is that it is the decision of the White House briefer as to whether or not the — the leading wire service correspondent provides that end, that — that time that they designate. That is not the White House briefer’s decision what comes out of the mouth of the senior wire service correspondent at any given time. It is the decision of that individual. So, I think we’ve had a great, robust exchange and I think, you know, it’s probably best if it’s conducted within the confines of the WHCA process and we all go meet deadlines now.

After some applause for Rosen’s remarks, Portnoy capped it off by telling reporters they should stay focused on “the needs of the American people” as “that’s why we’re all here.”

An open question: What is the utility of empowering a wire service to call an end to a White House briefing? Is it for the benefit of the @PressSec? Or for a few reporters in the front row? Or the entire press corps?

6/ I know first hand how much the architecture of the WHCA and the briefing room are set up for those from established players to get access to majority of access to corridors of the power. This is an act of censorship in a dynamically changing media environment

To see the relevant transcript from the aftermath of March 7's briefing, click here.