VENOMOUS Joy: GOPers ‘Love Covid So Much’ They Want to Kill You, ‘Drink It’ Like ‘Kool-Aid’ 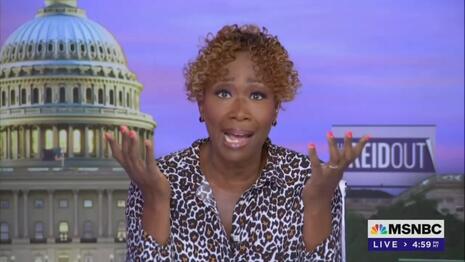 In what may have been her ugliest rant ever, MSNBC’s The ReidOut host Joy Reid told tens of millions of Republicans, conservatives, and right-leaning Americans on Wednesday that we “love Covid so much” that we “want it everywhere” to murder as many people as possible, “drink” COVID “in a Kool-Aid cup,” have it “injected into” our backsides, and have the virus “pumping through” our “veins” so we can attend as many funerals as possible.

With a rant like that, NewsBusters readers, take particular note of how Comcast has given its approval to this dangerous and inciting rhetoric as well as the advertisers listed at the bottom of this blog.

Reid wasted no time telling viewers what to think about their coworkers, family members, friends, and significant others:

We begin The ReidOut tonight with a message to Republicans: Okay, we get it! Covid is the precious and you love it. You love Covid so much you want it to spread into schools, in the office, in the Walmart, on the cruise ships, and at the club. That great, spongy ball with the red spikes. You want it pumping through your veins with an ivermectin chaser. Why do you love it so dadgum much? Well, we have absolutely no bloody idea. But here's the thing, you weirdos. Everyone else, everyone else hates covid. It is ravaging classrooms and hospitals across the nation[.]

After saying the GOP “seem[s] to be a-okay with COVID running wild,” Reid touted the results of the California gubernatorial recall election as proof that “your thirst for Covid is why you lost” since “[n]obody likes” a “creepy little Covid-loving death cult” that “threaten[s] our safety and our kids.”

Once she reveled in talk radio hosts dying of the virus, she posed this question to Obama campaign vet David Plouffe: “Are you surprised that Republicans have seemed to embracing Covid as the precious and trying to get it into every school building, cruise ship, job place, Walmart, Texaco, everywhere?”

Plouffe did nothing to push back against this (though he steered the conversation back to breaking down the recall returns), so by the left’s own rules, he was fine with it.

Reid went even further, proclaiming over 70 million Americans were chanting “we want COVID” to pollute “their lives and among their kids” and, after showing two charts claiming COVIDcases were higher in areas that wanted to remove Governor Gavin Newsom (D), Reid went all out:

[W]here people wanted to recall Newsom is where's the most Covid. So, they’re like, “give us more. Inject it in us. Is there a way we can drink it in a kool-aid cup? Because we want it. And we want it bad and we want this man to get out of our way and we want our COVID.” It's insane.

Again, Comcast and MSNBC all agree with this.

The Grio’s Jason Johnson had no apprehension about joining in, arguing the GOP would root for smallpox (click “expand”):

Reid honed in on a more specific target, saying Governor Ron DeSantis (R-FL) “may be a sociopath...but he's not stupid and I think that he understands that if he is going to inflict death on schoolchildren, he's going to have to make it real hard for their parents to vote.”

She then added Republican governors not only “love Covid,” but “[t]hey heart COVID” and “want to spread it.” She made exceptions for Governors Charlie Baker (R-MA) and Larry Hogan (R-MD) because “they’re not saying, ‘more COVID! COVID in your schools!’”

Fast-forward through wish-casting about the 2022 midterms based on California (and Johnson arguing the right hates children, Reid concluded with what appeared to be a gross comedic bit that insinuated Fox host Tucker Carlson was a gay man and wanted to examine the testicles of the man referred to in Nicki Minaj’s bizarre vaccine tweet (click “expand”):

REID: So, I’m going to be just contrarian a little bit. I actually, you know, Tucker Carlson said he wanted to do a deep investigative report on the — the cajones.

JOHNSON: On swollen something?

REID: It's an investigative report that we need. Go and do it, Tucker. I know you wanna. You really, really wanna. Alright, thank you very much. David Plouffe, Jason Johnson, let me stop before we get in trouble. Thank you guys.

Reid’s venomous claims that tens of millions of right-leaning Americans “love Covid so much” and want it so “bad” that we want to “inject into” our “rears” and “drink it in a kool-aid cup” were made possible thanks to the approval and endorsement of advertisers such as Allegra, Allstate, Amazon, Applebee’s, BMW, Breyers, Dove, E-Trade, Fidelity, Gold Bond, HughesNet, Liberty Mutual, Lincoln, Qunol, and PC Matic. Follow the links to see their contact information at the MRC’s Conservatives Fight Back page.

To see the relevant MSNBC transcript from September 15, click here.