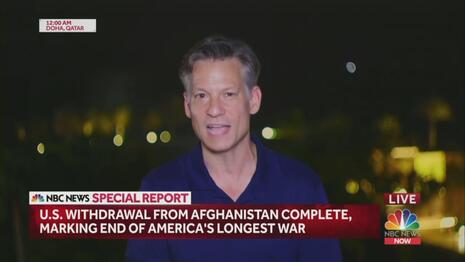 NBC didn’t pull any punches Monday when it came to slamming the Biden administration following the announcement that the final U.S. plane had left Afghanistan, officially ending the war, and leaving behind roughly 250 Americans. Over the course of their Special Report and NBC Nightly News, foreign correspondent Richard Engel and fellow NBC liberals gave a remarkable amount of historical context, criticism of the Biden administration, and skepticism about the future of Afghanistan not harboring terrorism.

NBC Nightly News Sunday anchor Kate Snow went first, tossing to Engel by noting that “[t]his date — August 31, 2021 — will go down in history books as the end of this conflict,” which Engel agreed as it’ll be “a humbling day” for the U.S., “a world superpower” that joins the British and Soviets as having failed in Afghanistan, “the graveyard of empires.”

Engel added that it’s “a difficult moment for the military” and, after acknowledging the massive airlift operation, got down to brass tacks: “[A]fter 20 years, the world's greatest military couldn't hold on and ultimately, handed the country back to the same extremists that they had toppled just a few weeks after 9/11.”

Explaining that “there are lessons to be learned” and some “might be learned by the wrong actors,” Engel gave a mini-history lesson about Osama bin Laden, how today could, unfortunately, inspire the next bin Laden, and whether the Taliban will have learned anything from their first go-around as rulers (click ‘expand”):

ENGEL: And there are lessons to be learned here and there are lessons that will be learned and they might be learned by the wrong actors. The reason Osama bin Laden carried out the attacks of 9/11 is he was on the ground in Afghanistan and he watched a group — a small group — of Islamist fighters defeat the Soviet Union. And he decided — he’s written about it, that with enough resolve, with enough determination, with God’s good graces, Islamist fighters can take on a superpower and he took on the United States. And the next Osama bin Laden might be watching what is happening right now and saying, it has happened. A small group of fighters took on the United States and watched them pull out.

SNOW: Richard, it was striking to hear the general say the Taliban was pragmatic and business-like, they defended the perimeter as the U.S. was withdrawing. What happens now to the country left behind?

ENGEL: Well, the Taliban are in charge. Afghanistan is now the Islamic emirate run by the Taliban. The Taliban have become one of the best-equipped armies in the world. That sounds strange, but the amount of hardware that they were able to seize puts them in the top cat — or top categories — top several dozen categories of best armies in the world. They will be very hard to dislodge. The United States is not going to go back in — very unlikely to go back in and drive them out again. So, they’re going to be there. The question is: have they learned any lessons? Will they keep their promises? The Taliban say that, now, after this experience, they’re going to try and engage with the world. They’re going to try to go through countries like Qatar, which are trying to nurture them and bring them and pull them into the international community, but can they really change? Will they change? Right now, they have been given a lesson in victory and there will be many in the Taliban who say, “why should we change? We have just been the way we are for the last 20 years and look where it has brought us? It has brought us to victory. It has brought us now to the airport as they watch American forces leave.

Engel closed on a very important note, saying that “the biggest difference” from the British and Soviet interventions will be the length and thus an entire generation was born and grew up without Islamist rule:

[F]or 20 yrs, the United States has offered an umbrella of protection over Afghanistan. The average age in Afghanistan is 19, so most people in the country have never experienced the Taliban.

They only experienced what it was like to grow up under American protection when they could hope, girls could go to school, when they could have dreams, and now, that is gone. And they are experiencing an absolutely uncertain reality with the Taliban back in power, making promises which may or may not be kept.

During NBC Nightly News, Engel reiterated that “a generation of Afghans raised with expectations of freedom and fundamental rights under an umbrella of American protection” before leveling this brutal blow: “A war once called Operation Enduring Freedom proving to be neither enduring nor leaving a legacy of freedom.”

Earlier in the day, Engel called the situation the “worst capitulation of western values” seeing as how “many people...are being left behind.”

Back to the Special Report, Snow noted that there are still hundreds of Americans left behind (at minimum) while longtime NBCer Andrea Mitchell listed for the Biden administration all the other people they left behind: “And these Afghan translators, Afghan women, journalists, Afghan lawyers and judges who had sent the Taliban to jails, they are still there and they've been desperate to get out.”

Snow used the Special Report to have correspondent Tom Llamas share the latest about damage in the Gulf Coast from Hurricane Ida, but not before capping the Afghanistan portion with thoughts from chief White House correspondent Peter Alexander.

Hours after his tense exchange with Press Secretary Jen Psaki, Alexander told viewers that he himself had been contacted by veterans unsure of how to get people out of Afghanistan. Along with the “humanitarian” and “refugee” crises the Biden administration will have to address, Alexander acknowledged the ages of the soldiers lost on Thursday (click “expand”):

[E]ven as we were hearing from the General there, I was hearing from those who are trying — private citizens who were trying to get out Afghan allies of the United States, those former Marines, retired Marines and others who served with those allies, trying to get out those members still stuck in that country. And they were asking me, how do we do this? Where do we send them? The journey by land is simply too dangerous. So there's some real challenges right — right now. The United Nations earlier today acknowledging that the plight in many ways for those Afghan civilians is just beginning. The refugee crisis, the humanitarian crisis associated with that is still a significant issue that the Biden administration is going to have to deal with right now as it tries to resettle so many of the tens of thousands of those who they were able to get out over the course of the last several days and weeks.

As it relates to the President himself, his public schedule is effectively closed for the day. They announced what they call a lid, which means we are not expected to hear or see from him today. It's likely that we would here in the form of a statement released from the White House. Jen Psaki, the press secretary earlier saying that President Biden would address the end of this war in the coming days, to use her words. But as we come to the end of a 20-year war, what to so many wasn't just America's longest war, but also a forgotten war has certainly not been forgotten to the more than 2,400 American service members who lost their lives, including those 13 who lost their lives in the last several days. As I've been — we've been hearing from the family members, so many of them, the average age of those 13 who lost their lives, Kate,  was just 22, many of them just 20 years old, meaning they were just inflints [sic] — infants, barely born just after 9 11 when American troops first arrived in Afghanistan.

To see the relevant NBC transcript from August 30, click here.