Dangerous Rhetoric: Reid, Pals Paint GOP as Terrorists Who Want to Create Another 9/11

In the almost-year since MSNBC’s The ReidOut was born, NewsBusters readers have seen host Joy Reid and the show foment dangerous and incendiary rhetoric against conservatives and Republicans. Wednesday’s show was one of the worst as Reid and a cast of characters painted right-leaning Americans as terrorists who want to commit mass murder, deny Black people the right to vote, and, if the For the People Act wasn’t passed, it’d be on par with September 11, 2001.

Reid began the show with the tiresome, decades-long liberal media adage: “What is happening to the Republican Party?” But Reid’s explanation grew ugly as she claimed that America and our government “is currently under siege by” a GOP that’s led by “a twice-impeached, one-term President who's more Jim Jones than George Washington.”

She further explained why no one would dare to even want to allow the right to see the light of day, explaining that tens of millions are demonically possessed by “Trump's rabbit hole of conspiracy theories, white grievance, and an unquenchable thirst for absolute power” with a future in which there’s “abortion bounty hunting” and “banning books” of anything that mentions slavery or racism.

Reid’s monologue of incitement continued with more explanation of why right-leaning Americans are shouldn't be considered part of society (click “expand”):

It's a party that's committed to turning domestic terrorists into martyrs and freedom fighters while launching a crusade against the COVID vaccine and now any vaccine, even if that leaves America more vulnerable to sickness and suffering and death and anyone who’s encouraging you to stay alive by taking the vaccine, well, they're called neo-Nazis. Remember when these ideas were relegated to some kooky corner of the internet? When erasing a politician's crime sounded like Putin? Not too long ago, our idea of the Republican fringe were people in tri-corner hats getting angry about taxes and a black president. Well, this new fringe ate that fringe for breakfast and it's taken over the mainstream Republican party.

And it all culminates in that new bizarro world, Republican ideology doing everything in their power to make it so hard for you to vote that you can never vote them out. And you know what they call that? A dictatorship. And as in all autocracies, what's fueling all of it is the chief autocrat’s Big Lie, something Texas State Representative James Talarico took on — head on while standing in the belly of the beast, Fox News.

And at the back end of the 15-minute A-block, Reid asked Lincoln Project adviser/grifter Stuart Stevens about what would happen if liberals failed in passing both the progressive boondoggle For the People Act and the John Lewis Voting Rights Act fail to become law.

With Reid frequently interjecting to agree, Stevens explained that not only would “the American experiment be in fatal peril, but the GOP would carry out a terror attack on par with September 11, 2001 (click “expand”):

STEVENS: Well, look, I — I think it's our inability to imagine what will happen —

STEVENS: — which is our greatest danger.

STEVENS: It is a replaying of 9/11 and we cannot imagine what this attack on America — and we have to get out of that.

STEVENS: We call it the American experiment because it could have failed.

STEVENS: It was an experiment.

STEVENS: And it's up to us to defend that.

REID: Absolutely. Texas State Representative James Talarico, cheers to you and all of the Texas Dems. Xochitl Hinojosa, Stuart Stevens, thank you very much. You guys are great.

In between, it was similarly a total dumpster fire.

After her opening hissy fit, Reid brought in her opening panel of beta male Texas State Rep. James Talarico (D), liberal strategist Xochitl Hinojosa, and Stevens, but it was Talarico who was welcomed like a hero.

Of course, Talarico gave Reid what she wanted to hear as he tied election integrity measures to claims about the 2020 election and said nothing the GOP proposes should be given the light of day because of their “anti-America” and “undemocratic” behavior.

Reid further sucked up to Talarico by painting conservative Texans as rabid fiends, asking him to describe what it’s like to live around an “atmosphere that Republicans have created” that consists of “this zeal against history” and “against voting.” 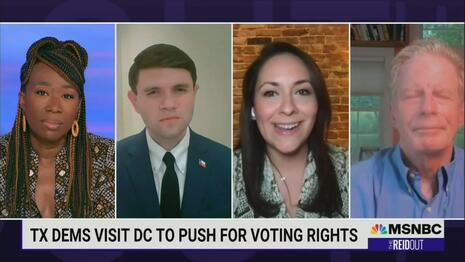 For her part, Hinojosa praised Talarico and his fellow Lone Star State Democrats for “using every tool in their arsenal to — to stop a voter suppression bill right now and to protect Black and Brown people to make sure that they have the right to vote.”

After Reid reiterated her belief that Washington Democrats were insufficiently sticking it to Republicans (because some, to Reid’s chagrin, see those across the aisle as human beings worth finding common ground on), Stevens offered unsolicited advice for liberals “to nationalize this election” and make H.R. 1/S. 1 (the For the People Act) and voting rights into “something big, something that's patriotic, people fought and died for to defend.”

If they take Stevens’s advice, Democrats might end up with a result like the one Stevens helped nail down in 2012.

Prior to teeing up Hinojosa and Stevens one last time (when the latter made his 9/11 prediction), Reid went to Talarico with more gaslighting, claiming Republicans are a “greater” “threat” to the existence of America and her citizenry than “any foreign threat at this point.”

Talarico agreed, praising his caucus as having “[stood] up for democracy and voting rights” despite “making tremendous sacrifices.”

Of course, Talarico went full Antifa, insisting the actions of Democrats on voting rights was “nothing compared to the sacrifices that brave Americans from Normandy to Selma had to do to protect the sacred right of people.”

This dangerous and inciting rhetoric of liberals against their conservative coworkers, family members, friends, and neighbors was made possible thanks to the endorsement and support of advertisers such as Audi, Ensure, Farmers Insurance, and Planters. Follow the links to see their contact information at the MRC’s Conservatives Fight Back page.

To see the relevant MSNBC transcript from July 14, click here.