Did Politifact Cave to VA Dems After Whining About McAuliffe Takedown? [UPDATED] 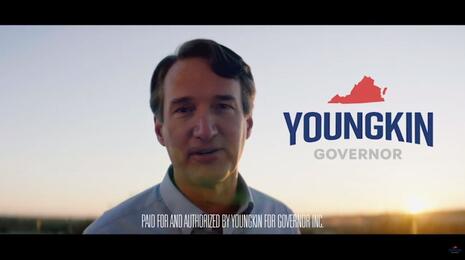 Instead of the original story being completely (or mostly) erased, Politifact VA reposted it with more material towards the bottom and a correction at the top that revealed their supposedly grave error was “fail[ing] to reach out to the McAuliffe campaign” and include 2019 and 2020 comments Youngkin made about Virginia’s economy.

It added: “This goes against our reporting standards, which require us to contact political campaigns that we write about. We’ve corrected that omission in this report and apologize for the error.”

From there, fact-checker Warren Fiske’s original story continued before keeping the conclusion at the bottom but adding Youngkin’s 2019 comments about Virginia Tech’s planned Arlington hub and a 2020 interview with McKinsey.

This, however, seemed largely to placate the McAuliffe campaign and tracked with the Business Insider article that sure came off like it was spoon-fed by the former governor’s team.

Matt Wolking, communications director for Youngkin’s campaign, says Youngkin has been consistent. Youngkin’s detailed economic criticism of McAuliffe and Northam has focused on professionals leaving Northern Virginia for other Southern states because of the high cost of living.

“It’s not that good things aren’t happening in Virginia; it’s just that Virginia should be No. 1,” Woking said. “We shouldn’t be in the middle of the pack.”

The bottom  line: Contrary to McAuliffe’s ad assertion, Youngkin’s 2017 words do not prove he was a “big fan” of the former governor’s economic policies. But his 2019 words suggest some good things have happened in Virginia over the last eight years - although he did not credit McAuliffe or Northam.

On Tuesday, we saw yet another example of the buddy-buddy relationship between the liberal media and those they want to help work to elect. A day after Virginia’s Politifact published a takedown of a misleading ad from former Democratic Governor Terry McAuliffe’s campaign against Republican Glenn Youngkin, the outlet retracted it Tuesday under the auspices of “a substantial omission.”

As of this story’s publication, the Politifact-affiliate Virginia Public Media (VPM) had yet to publish “a retraction notice” about why they “missed some key details” despite having promised one in a tweet at 2:12 p.m. Eastern.

First, the now-retracted article. “Politifact VA: McAuliffe Misleadingly Claims Youngkin Praised Him” immediately spelled doom for McAuliffe with its lede noting that a 39-second ad claimed Youngkin “was a ‘big fan’ of McAuliffe’s governorship from 2014-2018.”

The ad focused on an April 7, 2017 U.S. Export-Import Bank conference panel Youngkin had moderated with McAuliffe as one of the panelists. Politifact even transcribed the ad (click “expand”):

Narrator: “Glenn Youngkin is relying on an old political playbook: trash your opponent and try to scare the public into liking you.”
Youngkin: “I’m having a Virginia crisis because our commonwealth is in the ditch.”
Narrator: “But before he ran for office, he was a big fan of Terry McAuliffe and his record as Governor. Here’s one example:”
Youngkin: “Here, we have one out of fifty states that’s doing very well, and particularly in the Commonwealth of Virginia.”
Narrator: “Here’s another:”
Youngkin: “If you want to put a new plant down, that’s the place to put it.”
Narrator: “And one more time.”
Youngkin: “Governor, I’m going to come back to the role you played in developing Virginia’s economy. How do you do it?”
Narrator: “Come on, Glenn.”

Writer Warren Fiske then launched into a brutal evisceration of the fact that “[t]he ad edits and alters Youngkin’s sentences and, in instances, presents them out of context” and went line by line showing what Youngkin actually said.

Going to the first quote from the 2017 event (which was the second Youngkin quote in the transcript), Fiske pointed out that “Youngkin was not offering his personal opinion” but rather “summarizing remarks made by his four-member panel.”

Here was what Youngkin actually said:

What we’ve said, just to summarize a little bit, is while not 100% agreeing that we’re in a full recovery, I think there’s a general sense of the US economy doing okay, and particularly in the Commonwealth of Virginia. Here we have one out of 50 states that's doing very well and has really shown great strides.

Again, not exactly fawning over McAuliffe.

In the second panel quote, Fiske argued the full remark showed “Youngkin was simply asking McAuliffe to explain how he goes about recruiting foreign businesses to Virginia,” which is something all governors should do.

After debunking the last quote, Fiske acknowledged “[m]oderators are typically neutral and polite to panelists” and “Youngkin’s 2017 words do not prove he was a ‘big fan’ of the former governor’s economic policies, or that his current criticism of McAuliffe’s stewardship is a flip flop.”

With no warning, the piece was retracted with rumors suggesting it was due to a Virginia Democratic Party press release masquerading as a Business Insider article (which the party gleefully promoted).

But digging into the Business Insider story and we knew from the headline that it would be full of fluff: “Virginia's GOP gubernatorial nominee praised the state's economy when his Democratic opponent was in charge.”

This won’t come as a surprise, but the quotes Business Insider used were also taken out of context (including some the Politfifact piece had debunked) and the so-called reporting coming off like the work of a field staffer.

Following a lazy lede about how “[i]t’s an uncomfortable bit of reality” for Youngkin, reporters Adam Wren and Warren Rojas whined that Youngkin’s “quick to tarnish McAuliffe” before offering the same misleading quotes that were in the McAuliffe ad (and mocked Youngkin as “an eager student” of McAuliffe’s).

In an interview with McKinsey & Company, the businessman noted that the state then under the leadership of Democratic Gov. Ralph Northam had a “high growth tech industry, a growing health care sector, and an established manufacturing presence.”

Back in 2019, when Virginia Polytechnic Institute announced it was building an innovation campus in Northern Virginia, Youngkin was equally enthused.

“What’s happening in Northern Virginia is truly transformational, and Virginia Tech’s Innovation Campus will be right at the heart of it,” Youngkin said in a press release at the time. “Think of the possibilities — new technologies, new businesses, new markets, extraordinary new talent — all being created right here in Northern Virginia. And now, the scope of this ambition can be fully matched by this great location, which will be the home of the next global technology hub.”

But as Youngkin remade himself into a Republican politician in the Trump era — ultimately winning the gubernatorial nomination amid a crowded field of conservatives — his appraisal of the state’s economic climate changed, too.

In more than 30 public interviews, Youngkin dinged McAuliffe and “leaders in Richmond.” The state’s economy — despite being rated as a “Top State for Business” in 2019 — was now in “the ditch,” he’s repeated over and over again.

“For eight years, we all watched the McAuliffe Northam political machine drive Virginia into the ditch,” Youngkin said during a May 21 campaign rally, standing in front of an American flag and cardboard boxes.

Unsurprisingly, there were problems with these quotes. In both cases, neither had anything to do with McAuliffe’s tenure and worse yet, both were butchered.

Here’s the full quote: “If you’d looked at the Virginia economy then, you’d have seen a number of elements: a high-growth tech industry, a growing healthcare sector, and an established manufacturing presence around the marine industry, particularly shipbuilding and ship repair.”

And in the 2019 Virginia Tech comments, Youngkin was speaking about the state of one sector of the economy in Northern Virginia, not all sectors across the entire Commonwealth.

In other words, he was considered the benefits and pitfalls of the economy. Who knew one could think that way!

Nonetheless, Business Insider continued to simp for their preferred candidate with these embarrassing talking points that came off like a CNN monologue (click “expand”):

What’s apparent from an Insider review of the first-time politician’s press clips and social media feeds is that he is full of conservative outrage: denouncing critical race theory, blocking police reform, and shielding gun rights are all GOP go-tos on the culture war front. He’s otherwise pretty much a blank slate on the policy front.

Youngkin routinely talks about “reigniting” Virginia’s “rip-roaring” economy without explaining how he’ll spark such a revitalization.

Virginia Democrats took their own swing at Youngkin over his flip-flop on the state’s economy.

“Now, Youngkin is a hypocritical, dishonest Republican politician who will say and do anything to get elected — just like Trump,” he added. “Virginia needs a governor who will work to lift up all Virginians — not one who will put GOP extremism over the truth every step of the way.”

Returning to the delay in a retraction and follow-up item, longtime Virginia Republican operative Garren Shipley said it best when he tweeted: “In all seriousness, the longer this statement from @myVPM takes, the worse it looks.”