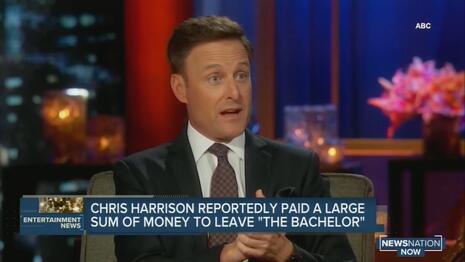 On Tuesday, ABC and Warner Brothers Television announced that it had officially cut ties with Chris Harrison, the longtime host of ABC’s The Bachelor and The Bachelorette following a truly childish and pathetic act of cancel culture.

However, Harrison may have had the last laugh thanks to numerous reports revealing that he demanded (and fetched) an eight-figure buyout or risk Harrison exhuming any and all bodies the franchise, network, and production company had buried.

To recap, Harrison found himself being burned at the stake by the woke mob in February when he insisted on there be grace for Bachelor contestant Rachael Kirkconnell when it was discovered that, among other sins, attended an antebellum-themed party in college. And because he said these things to an incensed Rachel Lindsey on Extra (who was the first Black Bachelorette), Harrison had to go.

Worse yet, he spoke out against the “woke police” that seemed hellbent on permanently ruining Kirkconnell’s life. And when the mob wants to make someone miserable, they’ll stop at nothing to do so.

Harrison confirmed the news in an Instagram post: “I’ve had a truly incredible run as host of The Bachelor franchise and now I’m excited to start a new chapter. I’m so grateful to Bachelor Nation for all of the memories we’ve made together. While my two-decade journey is wrapping up, the friendships I’ve made will last a lifetime.”

For their part, ABC and Warner Horizon said in a joint statement that Harrison’s leave/suspension would be permanent, adding they were “thankful for his many contributions over the past 20 years and wish him all the best on his new journey.”

The two companies should be grateful that Harrison won’t be airing unseemly information about the show. According to Deadline, he unsurprisingly had the motherload of dirt and was willing to dish as a final screw-you to the mob unless they ponied up to meet his demands (click “expand”):

Having fronted the Mike Fleiss-created The Bachelor and all its lucrative ABC spinoffs since 2002, Harrison will receive a rose of his own in the form of mid-range eight-figure payoff and promise to keep his mouth shut, I hear. The usual platitudes are expected to be exchanged for public consumption when the agreement is made public later today, but there is certainly no romance in the air behind the scenes.

The confidential settlement with franchise producers and distributor Warner Horizon was finally reached after one more flurry of back and forth between the parties and Bachelor broadcaster ABC on Monday night.  A motivational undercurrent, so to speak, throughout was Harrison lawyer Bryan Freedman pledging to unleash the Shiva of lawsuits exposing a swath of The Bachelor’s alleged dirty laundry unless his Gersh-repped client emerged feeling the financial love.

The New York Post’s Page Six one-upped this story with even more about Harrison’s alleged thinking and bitterness about being unceremoniously canned from the franchise he built from the ground (click “expand”):

“The Bachelor” host Chris Harrison demanded a $25 million payout after being booted from the show — and threatened to spill all the franchise’s dirty secrets if he didn’t get it, sources told Page Six.

“He has nearly 20 years of dirt,” an ABC source said Tuesday.

[I]nsiders said he wasn’t going down without a fight.

“Chris Harrison’s whole life was ‘The Bachelor,’ and he didn’t want to let go,” the source said.

Network honchos had hoped that Harrison would be “gone quickly and quietly” so that they could leave the public-relations nightmare behind them as fast as possible, the well-placed source said.

“He knows a lot about inappropriate behavior on set: fights between contestants, misbehavior including use of illegal substances while overseas and complaints from producers that were allegedly brushed under the carpet by ABC execs,” the first source said.

“He was ready to tell the truth about how things really work over there — and he has plenty of evidence to back him up. Chris was making $5 million a season and wanted $25 million to go,” the source said.

Along the way, Harrison provided a textbook example of how the cancel culture mob will never be satisfied and thus anything from genuine apologies to public self-flagellation will remain a waste of time. Harrison released a “sincere apology” on February 10 for having “wrongly [spoken] in a manner that perpetuates racism.”

A few days later, he stepped away from the show. Harrison still appeared on the show as the then-current season of The Bachelor and the “Women Tell All” special had long wrapped before the hubbub.

On March 4, Harrison even took the step of going on ABC’s Good Morning America to apologize on-camera for his alleged insensitivity and revealed to co-host Michael Strahan that he was working with hate-filled race-baiter Michael Eric Dyson. But that still wasn’t enough. When GMA covered the split on Wednesday, Strahan appeared incensed at the severance package.

Instead, ABC hired woke author and FS1 host Emanuel Acho to host the “After the Rose” special following the finale, which served as little more than a public flogging of Kirkconnell.

We’d learn in the weeks and months since that the Black Bachelor in question – Matt James – had rekindled his romance with Kirkconnell and even felt horrible about what had happened to her.

Monday marked the season premiere of The Bachelorette, which will feature former contestants Kaitlyn Bristowe and Tayshia Adams as co-hosts.

With hopes of going woke, we’ll see if the show continues to be the marque, almost-year-round show that ABC has come to expect since it debuted in 2002.