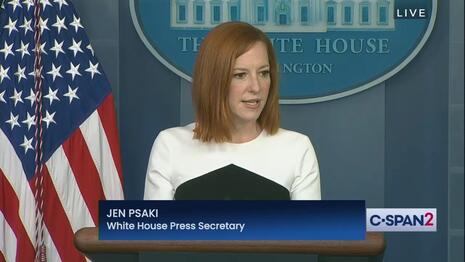 On Wednesday, Washingtonian magazine came out with a nearly-2,220 word profile of White House Press Secretary Jen Psaki that could best be described as a slobbering love letter that hailed her as a fact-based saint who refuses to play to the cameras, plays and works well with reporters, and represented a break from the belligerence and back-talking of the Obama and Trump administrations.

Jennifer Goldstein made it clear from the headline and subhead that this was a piece for the dark-blue Washington-area audience the rest of the country loved to hate: “The Awkward Feeling of Rooting for the White House Press Secretary; Half of America is smitten with Jen Psaki, while a swath of the White House press corps sounds quite taken with how polite she is.”

Goldstein would address the “awkward feeling” in paragraph 16, saying the #PsakiBomb “fandom...feels misplaced and even dangerous” for the public to be rooting for a government flack, but the irony was her piece would convey the opposite.

The lede was even more pathetic, falsely claiming Psaki hadn’t spouted “an unhinged lie or spontaneous infomercial” and bringing in ABC’s Jonathan Karl to fawn over her as “one of the most well-qualified” people to have hold the job and thus someone who “doesn’t get rattled” (click “expand”):

In her first three months on the job, White House press secretary Jen Psaki has yet to be caught in an unhinged lie or spontaneous infomercial, and she does not refer to the reporters who sit before her in the briefing room each day as “the enemy of the people.” The bar set by the Trump White House might be on the floor but, hey, so far she’s cleared it.

“She takes questions from everybody,” says Karl, who has covered four Presidents and more than a dozen press secretaries. “She doesn’t get rattled. She doesn’t lose her cool.”

“She’s like any other competent, professional, pleasant, lovely press person from any other era,” says another White House reporter. “The fact that people are losing their minds is an overcorrection from Trump.”

The New York Times’s Peter Baker was worse, gushing that Psaki was both “a pro” and “unflappable.”

Whether it’s lying about Biden ignoring Fox News, the border crisis (which is now in its fourth month), Georgia’s voter law (and doing so repeatedly), gun control, the minimum wage, and sexual misconduct claims to name a few, Psaki hasn’t exactly been a truthful spokesperson. But since it’s a friend of the liberal media doing it, they haven’t raised hell.

Doing her part to laud Psaki, Goldstein contrasted her “measured” and “warm” tone that asked reporters how their families were doing with Trump press secretaries being “Trumpites” having “gleefully performed belligerence on camera.”

“Psaki succeeds by arguably doing the impossible: Her face and voice beam out of our screens on a regular basis, and she rarely draws attention to herself,” she later added.

Sprinkled in was a rare early piece of criticism, citing one anonymous reporter stating that calls with Psaki are “one of those weird things where you leave the process feeling good about it even though, when you hang up the phone, you realize: ‘F—, she said nothing helpful.’”

On this theme of warmness, this was also a lie. Psaki caused a kerfuffle when she mocked the Space Force (and refused to apologize), dismissed the lack of action from Vice President Harris on the border, laughed at Peter Doocy's phrasing of the border crisis, questioned Kristin Fisher’s humanity as a mother and person, and was angered by the notion that Biden contributed to “systemic racism.” We could go on.

Goldstein had a biographical section, including Psaki’s time at the State Department and praise from former Clinton flack Mike McCurry, who boasted of her “good manner” and “personality that exudes from the podium.”

Baker and Karl weren’t done with the sucking up with the former defending Psaki from any sore feelings from Biden campaign aides they didn’t get the job and the former complimenting her as “the most prepared” choice for Biden.

Even when criticizing her, Goldstein made sure to water it down (click “expand”):

Her preparation did not save her from at least one rookie mistake: Less than three weeks after the inauguration, a 2020 tweet in which she referred to Lindsey Graham as “#LadyG” resurfaced. Critics pointed out that a homophobic tweet isn’t exactly a great look from an administration trumpeting its historic commitment to inclusivity. The tweet is still up, though indignation about it seems to have abated. More than one person who spoke with Washingtonian favorably compared Psaki’s old tweets to the contentious and ultimately disqualifying archive of fallen OMB nominee Neera Tanden, suggesting that if Psaki had deleted any offensive missives, she may have only made things worse. (“It is a lesson for all of us,” says Karl. “Think more and tweet less.”)

“White House administrations are always trying to figure out a way to game [the briefings] out to their advantage,” says Maxwell Tani, a media reporter for the Daily Beast. “The Trump administration obviously saw that it was to their advantage, when they did do press briefings, to make a spectacle of beating up on the media. To me, it seems like Jen wants to do the opposite, which is to increase the frequency of these things but also to just be as boring as possible.”

To some civilians, this basically qualifies as fan service. Plenty have found comfort in the vision of Biden’s administration as a reset—a supposed return to a Washington run by experts and professionals. But reporters remember the team under Trump’s immediate predecessor a little differently.

“A lot of those people in the Obama administration were assholes,” says the White House reporter. “There’s a myth that the press liked the Obama administration. Those Obama guys—just listen to Pod Save America. Imagine that smugness and smirking, on steroids, with people who are empowered to manage stories and are called upon to yell at you when they don’t like a story. They were f—ing awful.”

But multiple sources say Psaki was an exception. “There were people in the Obama White House who were aggressive and obnoxious and thought it was okay for them to berate and bully reporters, and she was never one of them,” says Baker. “She may have an issue with a story, but if she raises it with you, it’s in a civil and professional way, and then you’ll deal with it. It’s not going to boil down to some sort of shouting match. I’ve never heard her use four-letter language with reporters, and that was regular from some of her colleagues with Obama.”

Goldstein camped out for graphs 22 and 23 on the TJ Ducklo scandal, citing it as an example of their inability to reset the executive branch as a place of civility and ethics and that it was a source of negative headlines.

If readers made it this far, Goldstein closed with concerns about whether “Psaki’s work may do more for the performance of transparency than actual transparency” since briefings are “more of a democratic symbol” (though repeated stretches of no briefings in the last administration were met with bellyaching and warnings about democracy dying in darkness).

The juiciest quotes were jettisoned to the end as Goldstein relayed an anonymous female reporter’s concerns about the Biden White House (click “expand”):

As one female political reporter puts it, “Biden’s people complain about every single little thing.” She adds, “They kind of play mean-girls games. They can make people feel really isolated, and that’s just part of their way of controlling the press. There’s reporters on the inside and reporters on the outside, but they do it in more subtle, sophisticated, almost WASPy ways. Whereas the Trump people, half the time, would just be complaining about working for Trump.”

Though falsely treated by leftists as a carnival barker worse than even Jim Acosta, Fox’s Peter Doocy showed himself to be a far better man than the actual characters like Acosta and Brian Karem that Trump spokespeople had to deal with when he told Goldstein that Psaki has run “a very low-blood-pressure briefing room.”

If only we call could aspire to that level of civility in the face of nonsense.