And yet, no one stepped up to the plate to ask Psaki about a 2020 tweet of hers calling Senator Lindsey Graham (R-SC) a woman (“LadyG,” specifically). After expressing interest in past statements from Kayleigh McEnany, the press corps doesn’t seem to care about Psaki’s record.

The daughter of astronauts, the Fox News Channel’s Kristin Fisher brought up the Bloomberg reporter Josh Wingrove’s Space Force question: “The top Republican on the House Armed Services Committee is asking you to apologize for the comments made yesterday in the briefing room about the space force. Will you apologize?”

Psaki declined, only alluding to a tweet she sent from her government account and she would “invite members of Space Force here to provide an update to all of you on all the important work they're doing and we certainly look forward to seeing continued updates from there — from their team.”

But before the above quote, she worked in another dig at the Space Force: “I did send a tweet last night. You may not all be on Twitter. Maybe they’re not on Twitter.”

Fisher continued to press and then expanded the scope to include what the Biden administration made about NASA. Unsurprisingly, Psaki wasn’t prepared with an answer for that latter point (click “expand”):

FISHER: But big picture here. I mean, does the Space Force have the full support of the Biden administration? Or is the President at some point perhaps going to try to get rid of it or in some way diminish it?

PSAKI: They absolutely have the full support of the Biden administration and we are not revisiting the decision to establish the Space Force. The desire for the Department of Defense to focus greater attention and resources on the growing security challenges in space has long been a bipartisan issue, informed by numerous independent commissions and studies conducted across multiple administrations. And thousands of men and women proudly served in the space force. As you know, it was established by Congress. And any other steps that would have to be taken by congress, not by the administration.

FISHER: One more space questions. NASA’s Artemis program, which was the Trump-era program to return astronauts to the moon by 2024. What is the president plan? What is he going to do with that program? Is he going to keep it intact?

PSAKI: I am personally interested in space. I think it’s a fascinating area of study but I have not spoken with our team about this particular program, so let me see if we can get you a more informed overview of that.

Jacobs brought up concerns from Senate Minority Leader Mitch McConnell (R-KY) whether schools should be receiving what Jacobs called “generous funding...where there — the unions are not allowed the schools to open.”

Twice asked for a reaction, Psaki refused to speak ill of a beloved Democratic Party organ and only reiterated the necessity of passing the $1.9 trillion package.

A few minutes later, Lucey brought up comments from CDC Director Dr. Rochelle Walensky that teacher vaccinations shouldn’t be a prerequisite for school reopenings and whether that means educators should “be prioritized over other essential workers in the vaccine line.”

Once again, Psaki deflected and insisted that her comments shouldn’t be treated as “official guidance.”

And towards the end of the briefing, Psaki memory-holed former acting DNI Richard Grenell as having been the first openly-gay cabinet official when she boasted that the Senate had “just confirmed as the first LGBTQ secretary in a cabinet.”

Elsewhere, a number of reporters offered respectful but pointed questions about said stimulus package. The Associated Press’s Josh Boak led off the briefing by citing a Penn Wharton Budget Model analysis that found 73 percent of stimulus checks would go into savings instead of spending.

CNN’s Phil Mattingly, CBS’s Ed O’Keefe, and then The Washington Post’s Seung Min Kim had stimulus questions as they inquired about where the White House saw chances to cooperate with Republicans, and whether Biden’s push for $1,400 checks was a broken promise given his push for $2,000 during the Georgia runoffs (click “expand”):

MATTINGLY: The Republican plan matches you guys up on the national vaccine top line and also the testing top line, but you ticked through some pretty significant differences between this and I ask this seemingly daily at this point, but where is —

MATTINGLY: — where is the space for bipartisan agreement when — when the differences are that significant across major components of what the President wants?

O’KEEFE: You saw the President say earlier he’s still confident he can get Republican support. Mitt Romney was asked about that a little while ago and he said, well, if they’re not going to budge off the $1.9 trillion number, it’s not going to happen. He was then asked, well, is there — can you give us a specific example of something that demonstrates the differences? You didn’t mention it. He says the $360 billion or so for states and localities. Is that something considered negotiable by the White House?

O’KEEFE: One other economic relief related to the pandemic. There’s a — there was a full-page ad in The New York Times last week put there by certainly prominent women calling on the Biden administration to implement what they’d call a Marshall Plan for moms in the first 100 days? Has the President seen the ad and would he support the idea of monthly payments to mothers who are saddled by this pandemic?

KIM: I have a couple questions. Thanks, Jen. So, during the Georgia runoffs, President Biden campaigned specially on $2,000 stimulus checks. And, obviously, as we discussed, the payment is $1400. There doesn’t seem to be an active discussion of them actually raising that amount. So, is that a broken promise to voters that may have been expecting $2,000 checks if Democrats won and would the administration be open to raising that amount? 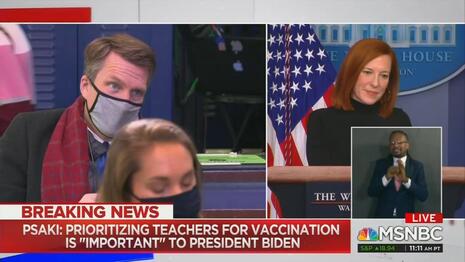 A few reporters after NBC’s Kristen Welker noted that the mere occurrence of next week’s impeachment trial would hinder unity, EWTN’s Owen Jensen also brought pressing questions, but his pertained to pro-lifers.

President Biden has stated that he wants to unite the country. But, in the first two weeks he’s been in office, however, and much to the great disappointment of pro-life Americans, he has revoked the Mexico City policy, he ordered the review of Title X, and issued a statement strongly supporting Roe v. Wade. Is the President going to make any effort to reach out to pro-life Americans in his administration?

Psaki emphasized that Biden was merely “delivering on promises he made on the campaign trail, but the president will reach out to all Americans, and that is how he's going to govern, but he talked about it in his inaugural address and has every intention on delivering on that promise.”

When Jensen followed up about whether Biden’s Catholicism “guide[s] him in any policy decision-making,” Psaki countered that it impacted his entire life, so it certainly “guide[s]...him as a human being.”

And on one last note, not one reporter had the bravery to ask about The Daily Beast story telling of Psaki’s team pre-screening briefing questions.