It goes without saying, but MSNBC’s Joy Reid has a serious problem having built a career fomenting disingenuous arguments and racial tensions. Tuesday’s ReidOut provided another entry in as she argued Fox News is “a hub for racial hatred” and “very dangerous, deeply concerning platform” with people like Tucker Carlson who “don't actually care about” kids and refuse to wear two masks like she does despite being fully vaccinated.

Reid has tweeted about how she and her family would continue to double mask and not travel post-vaccination, but she insisted over two teases that “the right” has “launch[ed] dangerous, new attacks on science” and displayed a “hostility to science” that’s “reached a new level of awfulness, targeting those who are taking the pandemic seriously for ridicule and even harassment.”

Carlson’s Monday monologue on masks had struck a nerve in triggering a day’s worth of hyperventilating coverage, so it was in that spirit that Reid started screaming and speaking in a combination of condescending yet disgusted tone as she called it “a new low even for Tucker Carlson of Fox News who, this week, encouraged his viewers to harass and threaten parents and their children to use a mask.”

Agree or disagree with Carlson, Reid took this exhaustion of mask-shaming and argued that Carlson “wants his America to unleash the hounds during a time when police violence is under unprecedented scrutiny” and calling for a mob to hunt down people “at the playground, the zoo or inside a bouncy castle, and interrogate you for making a personal choice.” 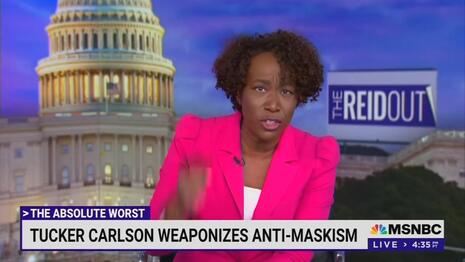 f wearing a mask is “a personal choice” that’s none of your business, then why have liberals spent a year accusing those who don’t in any and all settings of murder?

Reid isn’t concerned about nuance or even seeing her political adversaries as human. Instead, she said “conservatives are just really angry that they've lost control of American society and culture” and accused Fox News of wanting nothing but ensuring its audience is perpetually angry.

Again, if that’s true about Fox, then what is Reid trying to do about stirring anger and fear in her progressive audience and specifically people of color? Here again, another Alinsky-ite tactic.

She continued, warning that FNC is no longer “just a hub for racial hatred,” but instead “a very dangerous, deeply concerning platform so that committed — so committed to the Big Lie that its top host is encouraging its viewers to harass strangers and demand that they bare their faces.”

Framing anyone and everyone on the right as both anti-mask and anti-COVID vaccine, Reid concluded with two isolated cases as proof that Carlson and right-leaning Americans “don't actually care about the children” and instead only care about themselves and being angry because it makes them feel good.

Speaking of things that make people feel good, Reid used part of the next segment with Dr. Vin Gupta to flaunt her commitment to double-masking.

After playing a clip of President Biden touting CDC guidelines that vaccinated people can choose to not wear a mask in certain outdoor situations, Reid told Dr. Vin Gupta about her own masking habits (click “expand”):

REID: Dr. Gupta, I am among the fully vaccinated, joined team Pfizer, and I did go jogging today in the park, and I did — this was the mask that I wore with a doctor's mask under it and most of the people that I saw that were in the park — the park was packed — I would say, like, 95 percent of the people still had masks on. There were people who were really getting upset about that. I won't name them. Should people be freaking out that some people like myself who are vaccinated should still wear masks outdoors? Should we do that?

DR. VIN GUPTA: Well, definitely not. Good evening, Joy. I think you're going to see residual masking based on personal preference for — for months, if not years, after this pandemic is over. So, no, I think that’s — nobody should judge anyone else's personal health decisions. Having said that, I will say that the CDC was well timed to put this out there, because there is no data — frankly, there has not been data for many months now that outdoor transmission is a thing, especially when warm humid air where Joy, we know that respiratory viruses don't like humid air, they like cold, dry air. So, you have warmer weather. You have the fact that more people who are vaccinated, the wind currents, there is no way you'll get exposed unless you're at a rave or outdoor concert where you're really close to people who are not masking.

GUPTA: Outside of that, this is — this is the wise policy.

REID: Well, I mean, the reason that I still do it is that people who are jogging are all breathing, and it’s like, you're in their backdraft, and it’s like, if I’m going to run with — behind a lot of people, I do it.

Not to be outdone by Reid, Gupta made his mark by saying the quiet part out loud, which was that masking will continue to be a thing “for months, if not years, after this pandemic is over.”

Reid’s paranoid, poisonous, and racist nonsense was made possible thanks to the endorsement of supportive advertisers such as Atlantis, Dove, Fidelity, and Tractor Supply Co. Follow the links to see their contact information at the MRC’s Conservatives Fight Back page.

To see the relevant MSNBC transcript from April 27, click here.