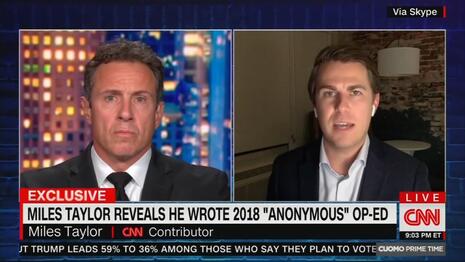 UPDATE, 10/30, 1:10 p.m. Eastern: The silence is over on MSNBC. Friday morning's MSNBC Live with Stephanie Ruhle ended the Phil Griffin-led network's censorship of the Tucker Carlon-Tony Bobulinski interview with two minutes and 16 seconds gaslighting viewers into dismissing and all Biden family claims as “unverified” and a distraction from the coronavirus pandemic.

In other words, MSNBC has offered 11 times more coverage to Miles Taylor than they have Bobulinski.

Meanwhile, CNN has still yet to cover Bobulinski's revelations.

On Wednesday afternoon, CNN contributor and former DHS chief of staff Miles Taylor became 2020's media equivalent of Al Capone’s vault, revealing himself to have been “Anonymous,” the author of a New York Times column and eponymous book denouncing the dangers of President Trump.

Right on cue, CNN and MSNBC were head over heels for Taylor, giving him 94 minutes and 28 seconds over the 24 hours since his unveiling. But when it came to Fox News Channel host Tucker Carlson’s bombshell Tuesday interview with former Biden family business associate Tony Bobulinski, they have yet to even acknowledge it.

CNN led the way, devoting 50 minutes and 11 seconds across eight shows to one of their own despite the fact that he had lied on-air to them that he wasn’t “Anonymous.”

That included a lengthy interview on Wednesday’s Cuomo Prime Time in which Taylor compared himself to Alexander Hamilton, John Jay, and James Madison writing the Federalist Papers as Publius, and insisted he didn’t speak out for money.

But since this was CNN where even someone engaging in a sex act on a Zoom call won’t get you fired, they won’t be firing or even suspending Taylor for having lied to them.

Over on MSNBC, Taylor was still covered despite not being on their payroll to the tune of 26 minutes and 16 seconds were spent across three shows (Thursday’s Deadline: White House and The ReidOut plus Thursday’s MSNBC Live with Hallie Jackson).

At the end of the day, however, Taylor’s hits of dopamine run counter to what actually happened.

We’ll let Deputy White House Press Secretary Brian Morgenstern sum it up on Wednesday’s Fox News @ Night with Shannon Bream, including how The Times embarrassed itself by having lied to readers about Taylor’s seniority thanks to a rather esoteric term (click “expand”):

Miles Taylor today managed to discredit himself, The New York Times, and CNN all in one fell swoop and that is no easy feat He showed that The New York Times will publish anonymous smears by a twentysomething staffer, but they won't publish on the record evidence from Tony Bobulinski with contemporaneous documents and devices proving that the Biden family may be compromised by communist China. And let’s look at this. I mean, Miles was — wrote the op-ed before he was even chief of staff of the agency. He became chief of staff for six weeks and then he was pushed out. They made it seem like this was some kind of insider or Cabinet member who had the President’s ear.

Tonight, after denying on CNN airways that he was Anonymous, admitted that he was Anonymous, and then made outlandish claims about his interactions with the President. And let's be clear, the President had no idea who this kid was. The media propped him up because he said mean things about the President. Meanwhile, while he was leaving the administration, he could not have been more complementary, saying we were historically productive, that were keeping the American people safe. Then he went and got a job at Google in Silicon Valley and wanted to fit in with his friends and said Trump’s bad. Well, then he went to CNN. They said are you Anonymous? He said no, Today, he says, actually, I am Anonymous and here’s all these outlandish things I’m going to say the President said. Again, the president has no idea who this kid is. So, The New York Times is discredited, CNN’s discredited, and Miles Taylor’s discredited.

But again, CNN and MSNBC have yet to offer a single word about Tony Bobulinski’s Carlson interview. You know, the interview that pulled in over 7.5 million viewers, which was Tuesday’s most-watched show on cable and finished third when placed up against the broadcast networks (behind only the World Series on Fox and NBC’s The Voice).

So while the Russian disinformation in the Steele dossier received top billing and became a narrative ingrained in the fiber of CNN and MSNBC, Bobulinski’s audio and texts from Biden family members and associates (and, separately, the contents of Hunter Biden’s hard drive) are no more than unverified allegations that won’t even be dismissed as such on TV because they’re not covering it.

This marked yet another case of liberal media bias to another story of palace intrigue versus one of substance that would help both inform and educate the American public, but it goes much deeper than that. The black-out of Bobulinski’s story illustrated an Orwellian and purposeful censorship to aid and abet a candidate who could become president-elect in mere days.

As Carlson said on Wednesday, Americans “should be offended by” this censorship of Bobulinski’s story “not because the media are liberal, but because” this marked an actual “attack on our democracy.”