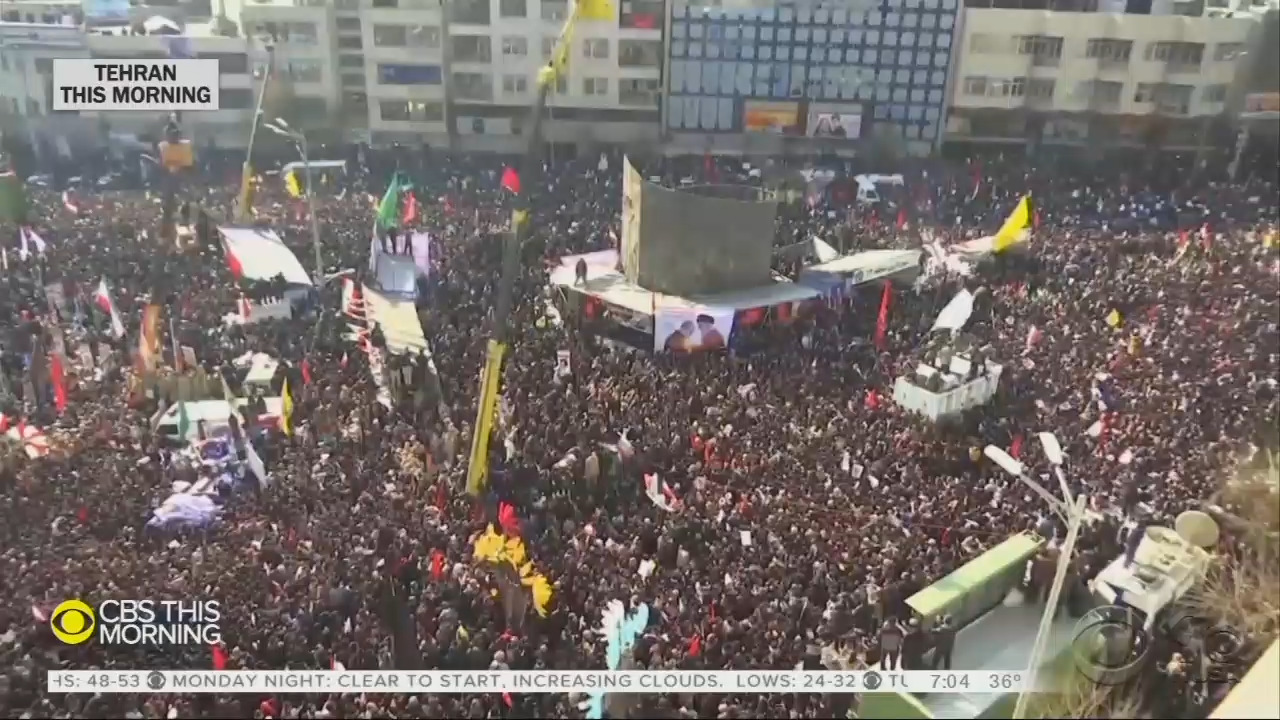 Continuing the liberal media’s disturbing infatuation with the murderous Iranian regime, the Associated Press published an embarrassing 831-word puff piece Monday morning about “the typically reserved and measured” Ayatollah Ali Khamenei’s “rare display of emotion” in which his “voice cracked under the weight of the moment” at Qasem Soleimani’s funeral.

All told, the piece on the fallout from Qasem Soleimani’s death was so disgustingly propagandistic toward Khamenei that he should consider hiring reporter Aya Batrawy (and Amir Vahdad, who contributed from Tehran) as his newest PR agent. Or at least have them act as intermediaries for pro-Iranian Western reporters.

The AP’s kowtowing to the anti-America, anti-free press, anti-LGBTQ, and anti-Semitic regime was first noticed when they were promptly ratioed for the tweet accompany the story “An emotional Khamenei shows Iran general’s death is personal”: 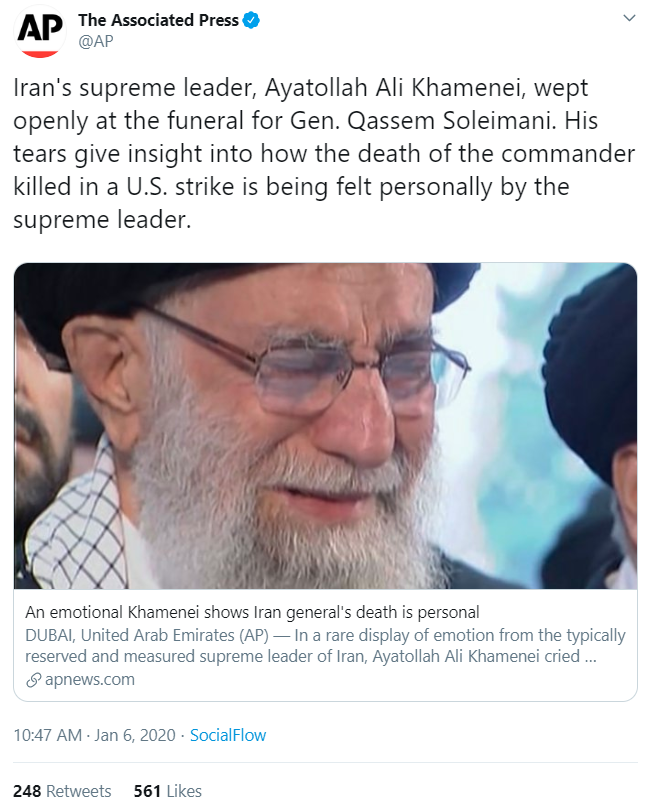 Now, the piece. Batrawy’s lede graphs read like the Khamenei wrote it himself or had it dictated by his English-language propaganda outlet PressTV (click “expand,” emphasis mine):

In a rare display of emotion from the typically reserved and measured supreme leader of Iran, Ayatollah Ali Khamenei cried openly Monday at the funeral of slain Gen. Qassem Soleimani, his most important military commander with whom he shared a deep bond.

“Oh Allah, they are in need of your mercy, and you are exalted above punishing your servants,” Khamenei said during a mass prayer as he stood over a flag-draped casket with the remains of Soleimani, who was killed in a U.S. drone strike in Iraq on Friday.

Khamenei’s voice cracked under the weight of the moment during a funeral procession unlike any in Iran’s recent history. Police said attendees numbered into the millions.

The funeral showcased the depth of the bond Khamenei had with the slain general and gave insight into how Soleimani’s death is being felt personally by the supreme leader. It could also impact how Khamenei responds to the United States.

Since when are the media trusting Iranian “police,” but suggesting that President Trump shouldn’t be trusted with even the most basic tasks?

Batrawy began by boasting that, “to many across the Middle East” and the U.S., Soleimani was “a dangerous figure,” but for Iranians, he was a “powerful” and “lionized figure” “in Iran....who embodied Iran’s lethal reach in the face of crushing U.S. pressure.”

She again went soft in describing what Soleimani meant to Khamenei (click “expand”):

To Iran’s supreme leader, Soleimani was a loyal aide who conferred with him often and cemented Tehran’s footprint far beyond the country’s borders, helping to preserve and advance the principles of the 1979 revolution that brought Iran’s Shiite leadership to power.

Their relationship was so close that Khamenei was photographed more than once embracing Soleimani in ways that are customary in Iran for fathers and their beloved sons.

In one such photograph from 2018, Khamenei, seated on an elevated platform, leans down and kisses Soleimani’s forehead. In another image from 2017, Khamenei is seen kissing Soleimani’s cheek during Ashoura, a religious day of mourning among Shiites.

So revered was he by Khamenei, that the supreme leader awarded the general Iran’s highest military order in March. Iran’s Tasnim News Agency reported that Soleimani is the only Iranian military official to receive the Order of Zulfaqar since the 1979 Islamic Revolution.

When pinning the medal on Soleimani, the Iranian leader said he hoped God would reward the general and help him live a blissful life that ends with martyrdom.

As for the inverse, she described Khamenei as having been “a venerated spiritual figure” for Soleimani. 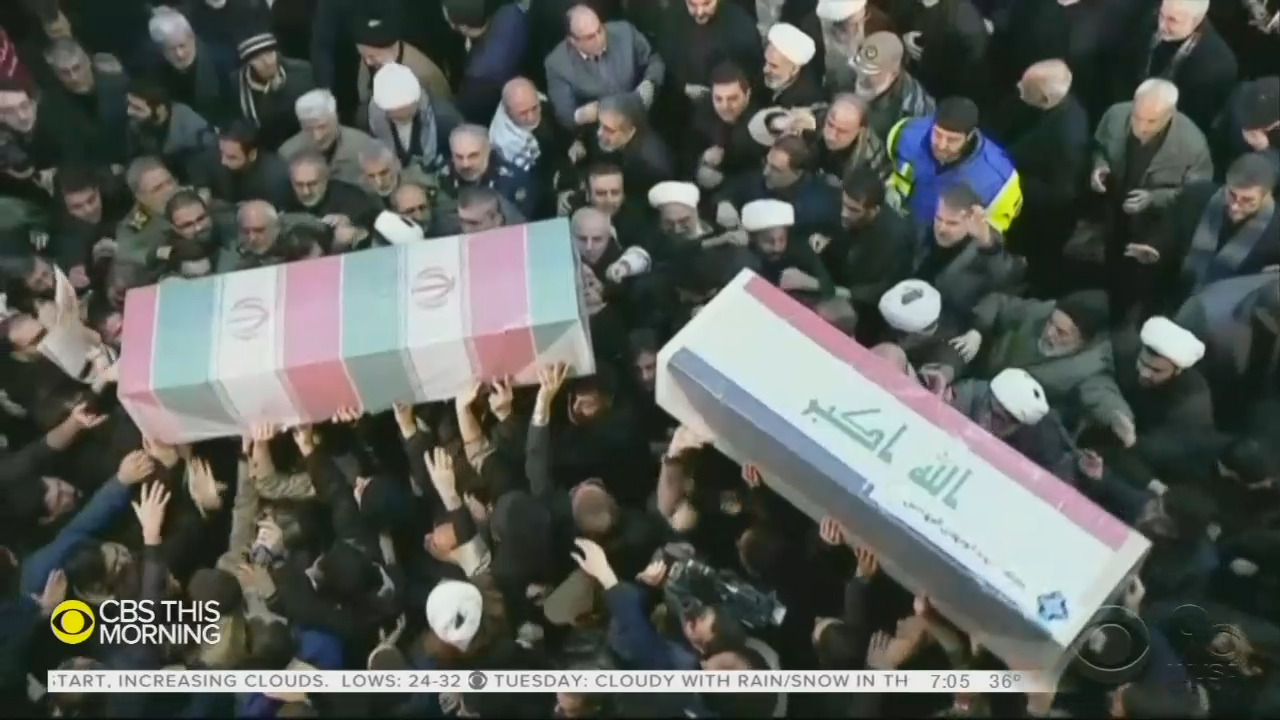 Batrawy joined the ranks as a stenographer for the funeral too, gushing that “Soleimani has received what no man before him has in modern Iran” with “funeral processions...spread over several days and cities.”

Even near the bottom of the story, she boasted that Khamenei “had been photographed kissing one of [Soleimani’s] sons on the forehead” and “[i]n a deeply personal and symbolically weighty gesture, Iran’s supreme leader made a rare visit to Soleimani’s home the day he was killed to offer condolences to his grieving widow and grown children.”

So as long as you’re opposed to Trump, you can murder hundreds of Americans, penalize homosexuality with death, and want Israel wiped off the map. But support this President and think Fox News is a real, serious news organization? Watch out because CNN and friends might try to ruin you!