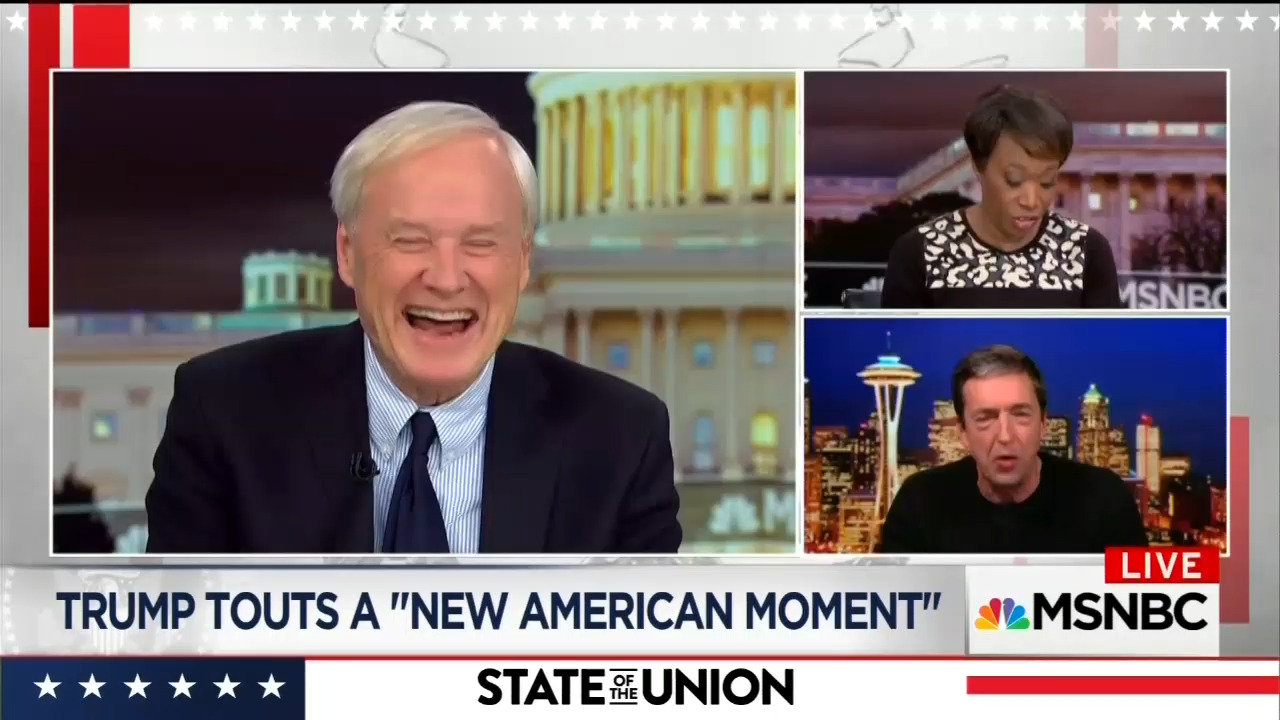 Late Tuesday, the President’s State of the Union address and Democratic response were completed around 11:00 p.m. Eastern, but MSNBC kept it going live until 2:00 a.m. Eastern on Wednesday. While it’s doubtful you stayed up to watch, you missed some mind-numbingly stupid quotes.

So, here they are (presented in chronological order):

“I thought going after some of the victims of MS-13 was really rough on those parents. I mean, the idea of being a parent and losing a kid, a child, and then have to go sit there before the American people in agony, I don't know, I don't know,” Matthews complained.

However, he quickly realized that perhaps there was “some educational purpose in it but I think it could have been done differently.”

Around the 12:53 a.m. Eastern mark, MSNBC political analyst Ron Reagan lost his mind in declaring that he had “an odd feeling watching this speech” because he can’t “remember a time when you would watch a State of the Union address being delivered by a President who is, I guess you could say, actively betraying the country and I don’t think those are — those are too strong words.”

This was in reference to Trump’s supposed, definitive, treasonous collusion with Russia to win the 2016 election against Hillary Clinton. He added that, despite having zero evidence, the Russians are already interfering in the 2018 midterm elections. If Democrats win in a landslide, I wonder if Reagan will be singing the same tune.

4. 3. Reid Mocks MS-13 as Something Nobody ‘Has Ever Heard Of’ Unless You ‘Watch Fox News’

AM Joy host Joy Reid already has a reputation as one of the most unpleasant and vile people in cable news, so it was no surprise when she mocked the brutal Hispanic gang MS-13, which has taken hold in various pockets of the country with gruesome reins of terror by illegal immigrants.

Reid complained that Trump’s legitimacy is “the defining issue” of his administration from the Russia probe to the Wolff book, but refused to touch on those in his State of the Union address.

Hold on here. So, Joy, would you say that The Washington Post is on the same plane as Fox News? Because if not, the liberal paper ran three brutal stories (here, here, and here) detailing the groups brutally just in the last few months. Search any Long Island news source and you’ll likely find similar stories. What a despicable person.

Seconds after Reid’s morbid take, she joined Matthews and Reagan in devilishly giggling about Americans being fearful of falling victim to MS-13 burning, castrating, cutting, or raping someone to death.

“I mean, he sounded like a president from the past and then the second half of the speech was how all immigrants are murderers and he needs to stop them from coming into the country through family migration. It was a bizarre, two-part speech,” Reid stated.

Matthews was right on board, fretting that he tried to bring people together but “was cloaking his darker purposes” by using “a lot of candy coating of the speech tonight” to drive home the argument that “we hate the god damn North Koreans and we hate the drug dealers and we hate that the people they come from.”

Regan interjected to make a fallacy that the President argued “[i]mmigrants are all MS-13 members” and thus “I'm sure everybody is, you know, going home tonight terrified that MS-13 is going to attack them on the way home.”

It was there that all three burst out laughing at Reagan’s claim before the son of the former President concluded: “As Joy said, really, who runs into these people? I'm not saying that they don't exist. But it's not exactly a national scourge here.”

Sorry, Ron, but I’d bet that the families at the State of the Union last night and in stories like this one would beg to differ.

There comes a point where the hatred of someone just turns into mockery and peddling outlandishly false claims. And such was the case here when this despicable trio jested that the President probably didn’t read his speech beforehand.

Reagan observed that “there is this sort of odd feeling you get when you listen to Donald Trump making a speech like this and I think part of it is that he doesn't actually inhabit the words that's he's saying” because “[h]e has never thought those words.”

Matthews burst out laughing as Reagan continued: “Somebody has written them down and put them on a prompter and he’s reading them.”

The panel then kept this routine going:

MATTHEWS: You mean, you think he just saw them on the prompter and met them there.

REID: They were revealed to him on the prompter.

MATTHEWS: He met them on the prompter.

REID: Chris, how much time do you think Donald Trump spends thinking about black employment, right? And he goes on and reads it with this sort of, wow, gee wiz, I just read that for the first time. I mean, yeah — he doesn’t seem to be — he seems to be discovering every word he's saying for the very first time, until he gets to the Stephen Miller part of the speech.

Right before the end of the program, Reid echoed a tweet of hers by knocking Trump as supposedly flaunting himself (and only himself) as “the embodiment of faith, family and 1950's values” even though he’s “a guy who, you know, arrived separately from his wife.”

“You know, Donald Trump wants loyalty but he wants loyalty of the kind that you typically have in a banana republic where everybody is too afraid to oppose the leader. Or doesn’t dare,” she concluded