Friday’s “big three” network evening newscasts showed no remorse when it came to Republican members of Congress being shouted down and blasted by angry, liberal protesters, gushing over how the GOP is “feeling the wrath” of “demonstrators flooding” their events.

Of course, this was in contrast to how the media perceived Tea Party groups challenged members of Congress beginning in 2009 as the media gave it their best effort to denounce and vilify them.

With the chyron “heated meetings,” CBS Evening News anchor Scott Pelley proclaimed in a tease: “Also tonight, feeling the wrath. Members of Congress get an earful at town meetings.”

Congressional correspondent Nancy Cordes filed the report on the protests, spotlighting what Congressman Jason Chaffetz (R-Utah) faced on Thursday interspersed with soundbites of Chaffetz being booed:

Utah’s Jason Chaffetz is not used to getting booed in his reliably Republican district but last night, he knew what was coming because his GOP colleagues had faced similar anger back home primarily over the Republican rush to appeal ObamaCare.

Cordes ran through a litany of examples, including how “California's Tom McClintock had to be escorted out by police” since he was being chased by an angry mob that hypocritically chanted “[t]his is what democracy looks like.”

“The protests may already be having an impact. Some Republicans have begun talking about repairing ObamaCare rather than replacing it and the President, who initially said he wanted to repeal it and replace it right away, now says, Scott, that the process could take a year or more,” Cordes spun (even though it’s not been a unified front by the GOP on addressing ObamaCare).

Over on ABC’s World News Tonight, anchor David Muir led into congressional correspondent Mary Bruce’s story by explaining “[t]here was also anger boiling over at town halls across this country.” Bruce herself hyped that “[f]rustration with Washington [was] spilling out in town halls across the country” as “Republican Congress members fac[ed] the backlash.”

Like she did in labeling Education Secretary Betsy DeVos as “controversial” while reporting on angry protesters of her own, Bruce connected the Chaffetz protesters to a tweet from Inauguration Day about how glad he was to not have Hillary Clinton become president:

In Utah, Republican Congressman Jason Chaffetz met with boos. Chaffetz led some of those investigations into Hillary Clinton posting this picture shaking hands with her on Inauguration Day, with the caption, “So pleased she is not the president.” Now confronting 1,000 fed-up voters angry with the new administration. Similar scenes playing out from Tennessee — to Illinois — and Georgia.

Other demonstrators flooding Republican town halls across the country, like in deep red Georgia and in Utah where voters demanded Congressman Jason Chaffetz, who heads the House Oversight Committee, do his job and investigate President Trump...Other protesters pushed lawmakers on the President's bid to get rid of the health care law.

The contrast between the media’s reaction to these protests and what occurred in the first of the Obama administration couldn’t be any starker.

In the case of the CBS Evening News, NewsBusters contributing writer Brad Wilmouth found this when examining an August 12, 2009 segment on the Tea Party:

On Wednesday’s CBS Evening News, correspondent Ben Tracy filed a report linking angry protesters opposing ObamaCare at town hall events to conservative groups, examining the possibility that the “outrage” has been “organized” by these groups, or even affected by “anti-government” sentiment over other issues, rather than legitimate concerns about the plans under consideration.

The August 13, 2009 edition of CBS’s The Early Show exhibited a similar disdain. Then-co-host Russ Mitchell bemoaned conservatives had caused the ObamaCare debate to devolve “into a nasty national shouting match.”

Mitchell also observed that: “Democratic lawmakers pushing reform are being jeered at testy town hall meetings. President Obama is urging Americans to ignore those who he says are trying to scare and mislead.”

O’DONNELL: Some anger on display gets stoked by the provocative megaphone of Rush Limbaugh, who went so far as accusing Democrats of wanting the socialized medicine of Nazi Germany.

O’DONNELL: To encourage attendance, conservative organizers acknowledge they send e-mail alerts to members but argue the anger is real.

Rounding out the networks, ABC’s World News anchor Charlie Gibson bemoaned on August 7, 2009 that there was “a pattern of disruption — opponents of change shouting at members of Congress so loud that at times police are called in.”

Here’s the relevant portions of the transcript from ABC’s World News Tonight with David Muir on February 10: 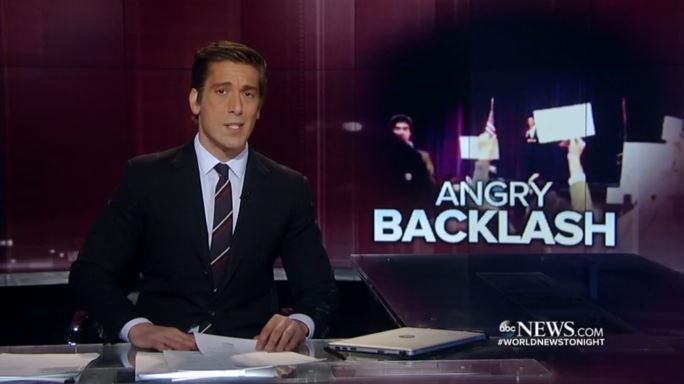 DAVID MUIR: There was also anger boiling over at town halls across this country. One member of Congress, even forced to cancel his town hall meeting. ABC’s Mary Bruce with the images tonight.

MARY BRUCE: Frustration with Washington spilling out in town halls across the country. Republican Congress members facing the backlash.

BRUCE: In Utah, Republican Congressman Jason Chaffetz met with boos. Chaffetz led some of those investigations into Hillary Clinton posting this picture shaking hands with her on Inauguration Day, with the caption, “So pleased she is not the president.” Now confronting 1,000 fed-up voters angry with the new administration.

REPUBLICAN CONGRESSMAN JASON CHAFFETZ (Utah): Given the choice that was before us, I say by far Donald Trump was the better choice. [AUDIENCE BOOS]

BRUCE: In California, Congressman Tom McClintock coming out, but with police protection. The common thread? Concens about ObamaCare and what might replace. 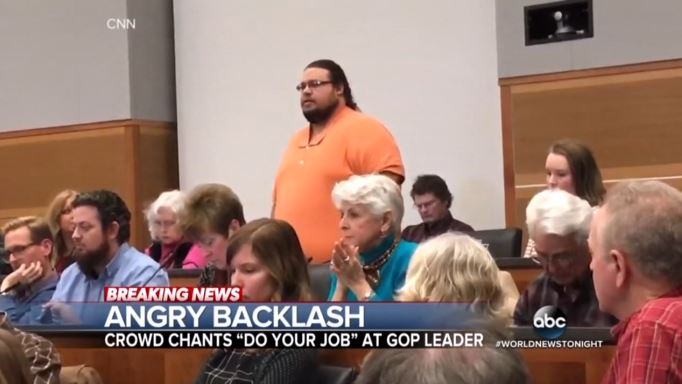 MAN AT BLACK TOWN HALL: You want to take away my coverage and have nothing to replace it with? [SCREEN WIPE] How can I trust you to do anything that’s in our interests?

BRUCE: We asked the House Speaker. [TO RYAN] Are you concerned that you need to not just present a plan, but sell it to the American people quickly?

HOUSE SPEAKER PAUL RYAN: We cherish the First Amendment and people who are concerned and anxious, we want them to know that we want to listen to their concerns. [SCREEN WIPE] We're going to be going out and talking about what our plan is.

MUIR: Some real uncomfortable moments across this country.