MSNBC’s Hardball host Chris Matthews made his feelings clear on Tuesday night about the latest revelations in the Hillary Clinton e-mail scandal as he expressed his hopes that they just turn out to be pleas by Huma Abedin, Anthony Weiner or even Hillary Clinton to “remember to pick up bread on the way home.”

Speaking to NBC News senior political reporter Perry Bacon, Matthews declared in an aside that: “If there's 500 e-mails that say, would you remember to pick up bread on the way home? I mean, wouldn't it be nice to say that's all it is?”

Beforehand, he opined that the FBI “owe[s] it us to contain the suppositions and the guesswork” on what the new e-mails contain because “Trump's out there saying he's guilty of an egregious crime, worse than Watergate, based on what the FBI report of Friday.”

Matthews also produced two other noteworthy moments on Tuesday’s show as he made evident based on conservative radio talk show host Hugh Hewitt’s invoking of Yosemite Sam that he was unaware of the famous Loony Tunes character.

Hewitt brought up Yosemite Sam in context of the Alicia Machado controversy following the first presidential debate and admitted that Clinton bringing her up made Trump go “all Yosemite Sam for three days” but predicted he won’t “fall into the same trap again.”

“Yosemite Sam is known for what in the cartoons,” a befuddled Matthews wondered.

Hewitt briefly seemed at a lost for words and explained that he’s known for “shooting up the whole room and going off — going after Bugs [Bunny].”

At the end of the segment, Matthews emphasized the he “know[s] movies” but “[m]aybe I miss life sometimes” to which fellow liberal and Washington Post columnist Ruth Marcus quipped: “I know you do.”

Alas, that embarrassment couldn’t compare to one towards the back end of Hardball as while thanking his roundtable panelists, he proclaimed: “Simon Marks. David Corn, April Ryan, it’s good to have you.”

There was only one huge problem. Mother Jones editor David Corn wasn’t on the panel but instead The Huffington Post’s Sam Stein was. When Stein interjected, a panicked Matthews stared into the camera and whined “[w]ell, why did it say that” in reference to the teleprompter.

Stein joked that he “like[s] David, but I was a little insulted by that” and while April Ryan screamed “trick or treat,” Matthews fretted: “Don't blame me. I do rely on the prompter. His name is Sam Stein. He the bears no resemblance to David Corn.”

The relevant portions of the transcript from MSNBC’s Hardball on November 1 can be found below. 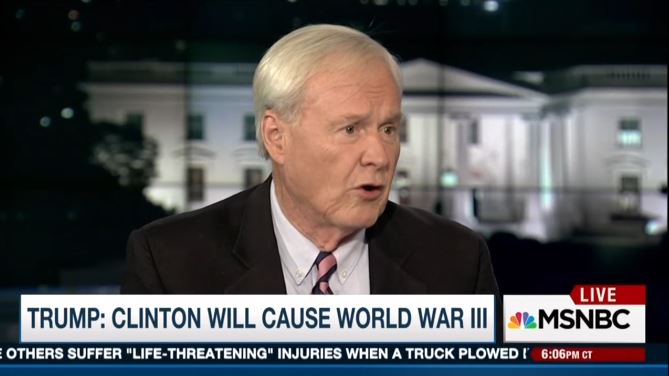 CHRIS MATTHEWS: I think they owe it to us to contain the suppositions and the guesswork. I think all of this guesswork that was provoked on Friday has to be restrained at some point to what they actually know because, Trump's — I'll make the argument to you. Trump's out there saying he's guilty of an egregious crime, worse than Watergate, based on what the FBI report of Friday.

PERRY BACON: I think his point is the FBI has said, we're doing some kind of investigation looking into it. I do expect if Comey can say something conclusive that he will do so. I don't know what if he can. There's a lot of e-mails here, so it’s not clear that’ll he’ll — you know —

MATTHEWS: If there's 500 e-mails that say, would you remember to pick up bread on the way home? I mean, wouldn't it be nice to say that's all it is?

BACON: Or if they're all duplicate of e-mails that have already been obtained in the investigation, I think he can probably say, these e-mails, there's not any new messages here. I do think, interestingly, today, for right now, at least, Hillary, it seems like the FBI story, she's not talking about it anymore. It looks like the Democrats sort of brushback against Comey did work to some extent. I think it has sort of silenced, it has sort of moved the issues along where Hillary's back on, Trump isn't qualified.

HUGH HEWITT: It is a trap for Donald Trump.

MATTHEWS: How many weeks ago did we start talking about this?

HEWITT: Four weeks ago. First debate. It’s a trap for Donald Trump. They want him to go all Yosemite Sam. So they put — it worked the first time in the debate. He went all Yosemite Sam for three days. I can't believe he will fall into the same trap again.

MATTHEWS: And attack her, you mean?

HEWITT: And attack her. I can't believe he'll do that.

MATTHEWS: Yosemite Sam is known for what in the cartoons?

HEWITT: Ah, shooting up the whole room and going off — going after bugs.

RUTH MARCUS: You can't believe that cause why? It hasn’t happened?

MARCUS: I know you do.

BACON: You’re in some.

MATTHEWS: Well, why did it say that?

MATTHEWS: You know, I’m sorry. It wasn’t — but you’re not David Corn. 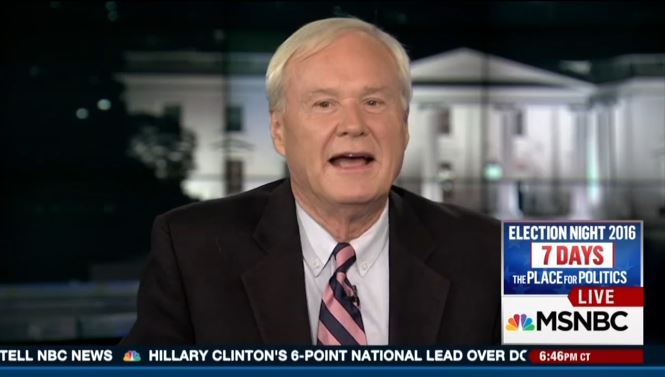 STEIN: I like David, but I was a little insulted by that.

MATTHEWS: Don't blame me. I do rely on the prompter. His name is Sam Stein.

MATTHEWS: He the bears no resemblance to David Corn.