Matthews: Cruz Will Lose Nomination Then ‘End Up on the Radio’ Fighting Mark Levin

Still recovering from a long night covering the New York primary results, MSNBC’s Hardball host Chris Matthews resumed his recent streak of attacks on conservative talk radio host Mark Levin by suggesting on Wednesday that Republican Senator Ted Cruz (Tex.) will lose the GOP presidential nod so he can “end up on the radio duking it out with Mark Levin.”

Of course, Matthews’s analogy makes zero sense and could only be chalked up as a personal fantasy of his since Levin has not only endorsed Cruz but been a consistent supporter of Cruz’s conservatism and time in the Senate.

Matthews led into this cartoonish prediction by playing a series of clips from Cruz pointing out that John Kasich has been mathematically eliminated from securing the nomination prior to the convention to paint the Texas senator as a hypocrite since he himself could soon be in the same position.

Naturally, Matthews ignored the possibility that Trump could very well end up being short of the 1,237 delegate total himself following the conclusion of the GOP primaries on June 7.

Before reading a tweet from Kasich arguing that he’s still more viable than Cruz because of his favorable polling versus Hillary Clinton, Matthews proclaimed that he’s “been inspired” to hope that Cruz will find a second life in talk radio: “I’ve just been inspired. I think that Ted Cruz is going to end up on the radio duking it out with Mark Levin at some point. That's going to be his career move at some point.”

Frequent readers of NewsBusters may recall that Matthews has targeted Levin on two previous occasions in 2016 with the first coming on January 18 when he whined that the Levin TV founder is “one of the most distasteful human beings out there.”

Three months later on April 4, he pontificated that, upon seeing the conservative talk radio landscape in Wisconsin, there were “like a million little Mark Levins out there.”

Back to Wednesday night, Matthews also forgot the facts when he complained to Trump supporter and Republican Congressman Scott DesJarlais (Tenn.) that the billionaire’s opponent (i.e. Cruz) is so “unlikable” and when combined with Republican National Committee Chairman Reince Priebus, all his adversaries “are all less popular and less impressive than he is.”

While Cruz’s current likable/unlikable average on Real Clear Politics (RCP) is underwater at 21.2 percent, it’s still some 14 points less than Trump’s RCP average of 35.1 percent that’s only grown worse as the election moves along. Once again, facts proved to be rather stubborn for the long-time MSNBC host.

In a moment of befuddlement, Matthews exclaimed to Kasich supporter and moderate Republican Congressman Charlie Dent (Pa.) that Trump has a habit of spawned “some kind of weird excitement” in his supporters that he didn’t think rose to the level or “rabble-rousing.”

The relevant portions of the transcript from MSNBC’s Hardball on April 20 can be found below. 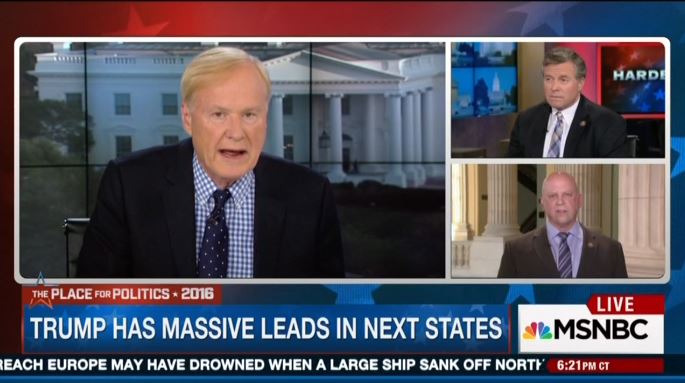 CHRIS MATTHEWS: People like him — the rab — not the rabble-rousing, it’s some kind of weird excitement he creates. What if he says, two days before Cleveland, I'm going to have a meeting on Monday at some arena and he says if we don't get treated right, in other words, if I don't get the nomination, we'll all walk together.

MATTHEWS: Well, in the past, Cruz argued that John Kasich should get out of the race because mathematically, Kasich can't win. Let's watch what he's refusing to do now, get out when you can't win.

CRUZ [on 04/05/16]: Well, I think any candidate that doesn't have path to winning, that's time when you should suspend your campaign and at this point, Kasich has been mathematically eliminated. He needs more than 100 percent of the delegates to be the nominee. That's obviously impossible. [on 03/16/16] It's mathematically impossible for John Kasich to become the nominee. [SCREEN WIPE] I think any candidate, that if you don’t have a clear path to winning, it doesn’t make sense to stay in the race. 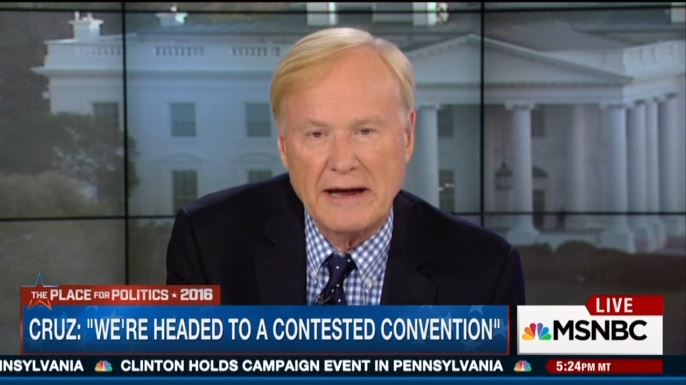 MATTHEWS: I’ve just been inspired. I think that Ted Cruz is going to end up on the radio duking it out with Mark Levin at some point. That's going to be his career move at some point. Anyway, today, Kasich tweeted: “Now that Cruz is mathematically eliminated, the only difference him and Kasich is Kasich can defeat Clinton.” Cause he’s got a better general election outlook. Congressman, let me ask you about this. Why is Cruz — how did you guys find such an unlikable opponent as Ted Cruz. I mean, he’s one — it’s like — Reince Priebus. These people that Trump is able to find as his opponents as bête noire are all less popular and less impressive than he is.

REPUBLICAN CONGRESSMAN SCOTT DESJARLAIS (Tenn.): There was a field of 17 candidates and, you know, as Charlie was saying, people are going to be disappointed because everybody bets on their horse and now that we’re at the end of the race, Trump has got a big lead, and, you know, I think he will take it to the finish line, so it's time for the party to unite. We have to get behind our candidate and we have to focus on the general election.