NBC News chief foreign affairs correspondent/MSNBC host Andrea Mitchell continued to heap praise on President Obama’s decision for the U.S. to reestablish relations with Cuba to the point where she briefly lectured a recently detained Cuban dissident on Monday’s NBC Nightly News about the benefits of the President’s visit.

Partway through her lead story on the newscast about the President’s first full day in Cuba, Mitchell lamented that the issue of human rights has been “an issue overshadowing the visit” and was on display when Cuban President Raul Castro grew visibly angry when CNN chief White House correspondent Jim Acosta asked him about political prisoners his country imprisons.

A few moments after that exchange was shown, Mitchell touted her own question by showing a clip of her speaking to Castro about the U.S. and Cuba having “different definitions and different interpretations of profound issues like democracy and human rights” (which was chronicled here by my colleague Kyle Drennen).

The liberal correspondent scoffed at such opposition to the President’s visit when she footnoted that “[s]ome say Mr. Obama is normalizing relations too quickly.” Speaking with Antonio Rodiles following his arrest on Sunday for participating in a pro-democracy demonstration, she lectured to Rodiles: “The President's argument is if I come, if we talk, I can make progress.”

The passionate Rodiles responded by simply arguing that “[t]he American government is giving too much to the regime and the regime is telling clearly we are not going to move.”

Prior to Mitchell, anchor Lester Holt proclaimed that Monday was “a day rich in historic symbolism, brass tacks diplomacy and the sober reality of erasing half a century of mistrust is going to be tough.”

For readers of NewsBusters, Mitchell’s pro-Cuban streak has been evident for some time, ranging from her interview with Fidel Castro in 2002 to her slanted reporting when the President first announced the change in December 2014 to proclaiming that “the Cold War will be over” in January 2015 to her bizarre gushing over Secretary of State John Kerry using the late Ted Kennedy’s cane when the U.S. Embassy reopened in Havana on August 14, 2015.

In contrast to Mitchell’s feelings about Cuba, ABC’s World News Tonight saw anchor David Muir repeatedly mention this while interviewing President Obama and chief White House correspondent Jonathan Karl had a short segment discussing a meeting he had with three political dissidents who will meet the President on Tuesday.

Karl stated bluntly that “Cuba does hold political prisoners” and mentioned that, on Sunday, “50 people, most of them women, were arrested as they tried to hold a silent protest.”

As for the dissidents he met, Karl told viewers that the three he spoke to “have spent a combined 27 years in Cuban jails and David, they told me today that the human rights situation here in Cuba has actually gotten worse over the past year.”

The transcript of the lead segment from March 21's NBC Nightly News can be found below. 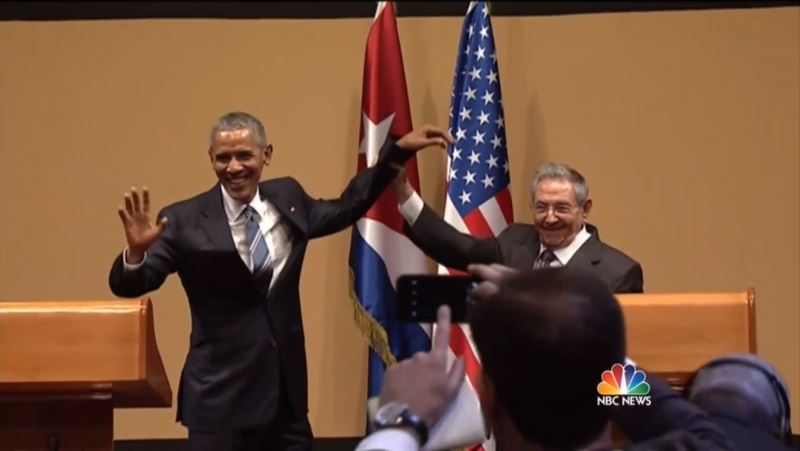 LESTER HOLT: It has been a day rich in historic symbolism, brass tacks diplomacy and the sober reality of erasing half a century of mistrust is going to be tough. President Obama who reminded us today said he was born the year of the Bay of Pigs Invasion met face-to-face on Cuban soil with 84-year-old President Raul Castro. It’s their first meeting on Cuban soil since diplomatic ties were re-established. Afterwards, they emerged for what turned out to be a tense give and take with the press, ending with this awkward clasping of the hands showing this relationship is still very much a work in progress. Our Andrea Mitchell was among the few called on at the press conference and joins me now. Andrea, it was uncomfortable to watch at moments.

ANDREA MITCHELL: It was uncomfortable and it's clear Raul Castro does not do press conferences. That's was only part of it. The two leaders agreed to disagree on big differences between the U.S. and Cuba, chiefly the U.S. trade embargo which President Obama would like to end and Cuba's treatment of dissidents, testing the boundaries of a new relationship. It was a day of historic firsts. The handshake on Cuban soil. The Cuban military band playing The Star Spangled Banner.

PRESIDENT BARACK OBAMA: This is a new day between our two countries.

MITCHELL: But Raul Castro's blistering criticism of the U.S. trade embargo and social policy did not feel new.

VOICE OF RAUL CASTRO’s TRANSLATOR: We find it inconceivable that a government does not defend and ensure the right to health care, education, equal pay.

MITCHELL: After pressure from President Obama, Castro did take questions from the press, a rare occurrence, but when a Cuban-American reporter asked about Cuba's political prisoners.

VOICE OF RAUL CASTRO’s TRANSLATOR: What political prisoners? Give me a name or names.

MITCHELL: It is an issue overshadowing the visit. [TO OBAMA] There were dramatic arrests of peaceful protests, the Ladies in White. What signal does that send?

OBAMA: If I engage, frankly, clearly stating what our beliefs are but also being clear that we can't force change on any particular country, ultimately it has to come from within.

MITCHELL [TO CASTRO] And for President Castro, what is the future of our two countries given the different definitions and different interpretations of profound issues like democracy and human rights 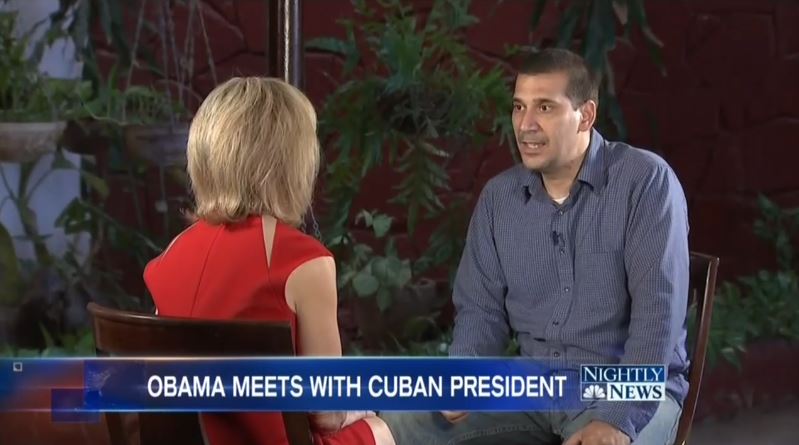 MITCHELL: Some say Mr. Obama is normalizing relations too quickly. Antonio Rodiles was detained briefly during Sunday's protests. [TO RODILES] The President's argument is if I come, if we talk, I can make progress.

ANTONIO RODILES: The American government is giving too much to the regime and the regime is telling clearly we are not going to move.

MITCHELL: Clearly, this is a relationship that is a work in progress, but there are new business deals today in the works for American firms here. Starwood today, Carnival cruise lines expected soon. A lot going on. Lester.

HOLT: The two will be together at a state dinner later on.