The newly heralded liberal comedy host Samantha Bee resumed her vile trashing of conservatives on Monday’s Full Frontal as she declared, among many smears, a pie chart of South Carolina Republicans to be “a NuvaRing of bigotry,” Ted Cruz “once killed an abortion doctor through prayer” and that America was crippled under Ronald Reagan’s presidency.

In addition, Bee went on an extended rant decrying so-called moderate Republican presidential candidate John Kasich for holding pro-life views and staying true to them as the Governor of Ohio.

Bee first footnoted that results of the South Carolina GOP primary from Saturday and observed that “Jesus slid on over and let racism take the wheel” as the exit polls showed many supported Donald Trump’s Muslim ban to which Bee added that the conservatives are “like a NuvaRing of bigotry.”

Skewering Senator Marco Rubio’s post-South Carolina primary speech when he invoked Reagan’s presidency, Bee trotted out for her liberal and uninformed audience failed talking points about the 1980's being such a horrifying time in the U.S.A.: “Good news, millennials, the stock market will crash and you get to choose between dying of AIDS or getting stabbed by a crack head. Good times!”

Turning to Kasich, Bee explained that, based on the media’s label for Kasich as a moderate, he appeared at first glance to be “the least disgusting stall” “[i]n the nauseating bus terminal restroom that is the Republican primary” and “not befouled by an unflushable toilet clog” that she symbolized with a picture of Cruz.

Upon further review, she first blasted his claims of being pro-traditional marriage but accepting of the Supreme Court’s legalization of gay marriage because the case in question originally involved Kasich since Obergefell v. Hodges started out in the Buckeye State.

However, what made Kasich more detestable in the eyes of the former Daily Show correspondent was his pro-life views and after a soundbite about comments offered in support of Kasich by the Ohio Right to Life, Bee quipped that at least Kasich wasn’t like Cruz “who once killed an abortion doctor through prayer.” She then argued that Kasich shows little compassion for rape victims:

Now, if you live outside of Ohio, you don't hear much about Kasich's anti-choice record because he hides his abortion restrictions in larger budget bills where won't be noticed kinda like a desperate teenager buying larger sweatshirts and modest John doesn't like to talk about his achievements. Literally! At all! Even when directly asked why he banned counselors from mentioning abortion to rape victims.

Before going to commercial, she lamented that Roe v. Wade ensures abortions for “women who don't live in states run by a governor on a stealth mission to control our baby ovens.”

At the end of her show, Bee furthered the myth that Planned Parenthood offers robust services aside from abortion in attacking Kasich’s recent move to defund the abortion provider in his state: “John Kasich really is pro-life. Cancer cells and HIV viruses will finally have chance to come to full term. Sleep tight Buckeyes.”

The relevant portions of the transcript from TBS’s Full Frontal with Samantha Bee on February 22 can be found below. 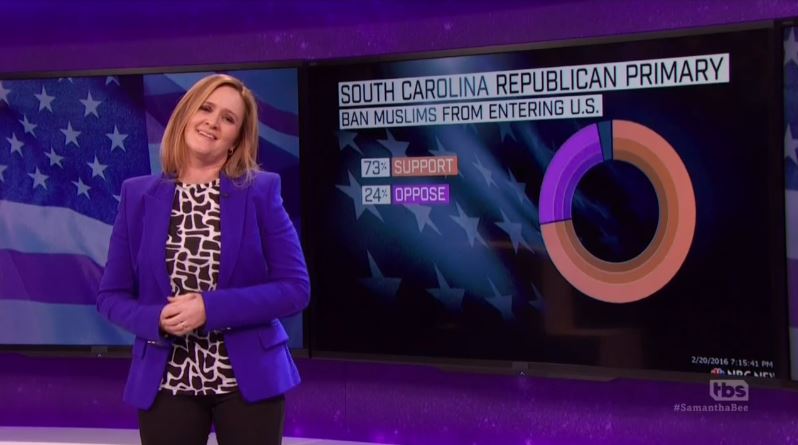 SAMANTHA BEE: Yes, in South Carolina, Jesus slid on over and let racism take the wheel with three-quarters of primary voters agreeing that Muslims should be banned from the United States. Aw, look at that, it's like a NuvaRing of bigotry but the real battle was for second place where a revival tent golem was narrowly defeated by first time chair user Marco Rubio. Aw, look at him sit. He thinks he's people.

REPUBLICAN SENATOR MARCO RUBIO [Fl.]: Those of us who grew up when Ronald Reagan was in the White House [SCREEN WIPE] are ready to do to the next generation what Ronald Reagan did for ours.

BEE: Good news, millennials, the stock market will crash and you get to choose between dying of AIDS or getting stabbed by a crack head. Good times! Meanwhile, Jeb Bush has suspended what for want of a better word we'll call a campaign leaving some Republicans wondering, is there anyone left to vote for who's not bonkers? What's his name? I want to say senator something or other.

BEE: In the nauseating bus terminal restroom that is the Republican primary, John Kasich initially seems like the least disgusting stall. Not appealing, per se, but at least not befouled by an unflushable toilet clog and Kasich pours on the Midwestern charm thicker than cream of mushroom soup on a casserole.

REPUBLICAN GOVERNOR JOHN KASICH (Ohio): This is just nuts, ok. [SCREEN WIPE] Geez oh, man. You're in the cupcake business and somebody comes in you don't like, sell them a cupcake. [SCREEN WIPE] You tell your mom and dad you love them. [SCREEN WIPE] People have accused me of having too big of a heart. [SCREEN WIPE] I just want to be kind to people. [SCREEN WIPE]  I'm the right porridge. One is too hot, the other's too cold but I have the right temperature.

BEE: Mmmm, tepid gruel, but is Kasich really the huggable moderate he's made out to be? She asked in a clunky, hand-fisted attempt at foreshadowing. I don't know, we'll take on gay rights.

KASICH: I happen to believe in traditional marriage but I've said the Court has ruled [SCREEN WIPE] we'll accept it and guess what? I just went to a wedding of a friend of mine who happens to be gay.

BEE: Yes, but first of all, he bought the cheapest gift off the registry and secondly, Obergefell v. Hodges, the Supreme Court case that legalized gay marriage was originally called Obergefell v. Kasich after the Governor who refused to recognize the out-of-state marriage of two men, one of whom was terminally ill. For a guy against same-sex marriage, Kasich was quick to take the other dude's last name and you know, for some reason, Kasich doesn't talk much about the issue closest to his heart. Your uterus. 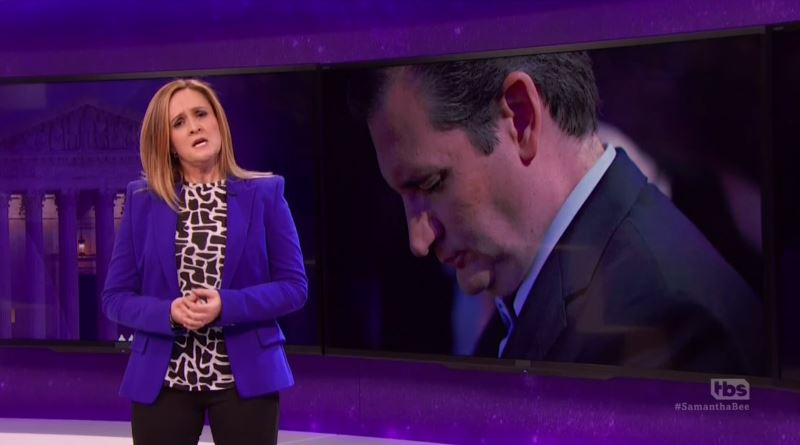 MSNBC’s MELISSA HARRIS-PERRY: Kasich's record against reproductive rights is so strong that the ahead of Ohio Right to Life described him by saying “there's no candidate running for president who has done more for the pro-life movement than John Kasich.”

BEE: Not even Ted Cruz who once killed an abortion doctor through prayer. Now, if you live outside of Ohio, you don't hear much about kasich's anti-choice record because he hides his abortion restrictions in larger budget bills where won't be noticed kinda like a desperate teenager buying larger sweatshirts and modest John doesn't like to talk about his achievements. Literally! At all! Even when directly asked why he banned counselors from mentioning abortion to rape victims. 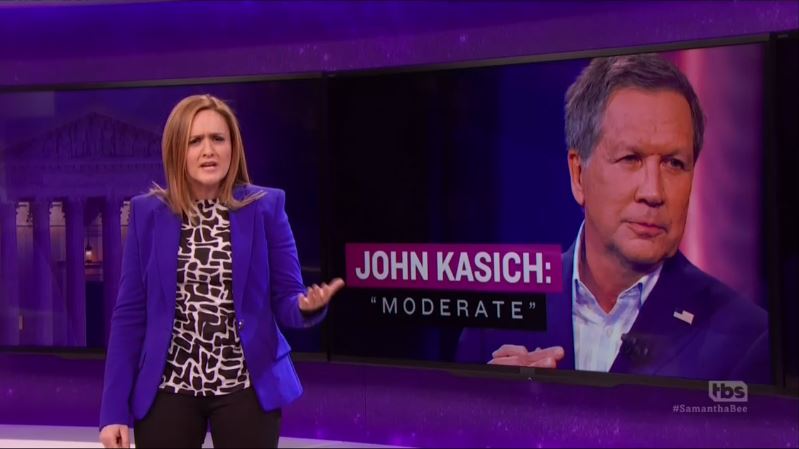 BEE: Oh, geez oh, man, did I forget to include exceptions again? Shucks. I tell you what, I'll throw one on to the highway bill. Hey, you know, I'm actually curious. What does the guy who wants to appoint Scalia's successor think about Roe v. Wade?

KASICH [on MSNBC’s Hardball, 02/17/16]: Oh, Chris, I don't want to get into the a big discussion here about the Court and all their decisions.

BEE: Roe v. Wade sort of legalized it? The way you're sort of still in this race? You know, he has a point. All the other Supreme Court decisions apply to everyone but Roe v. Wade only gives rights to women who don't live in states run by a governor on a stealth mission to control our baby ovens. So, GOP, take a closer look at John Kasich because while these other chumps make empty promises to do awful stuff, the so-called moderate gets awful stuff done. 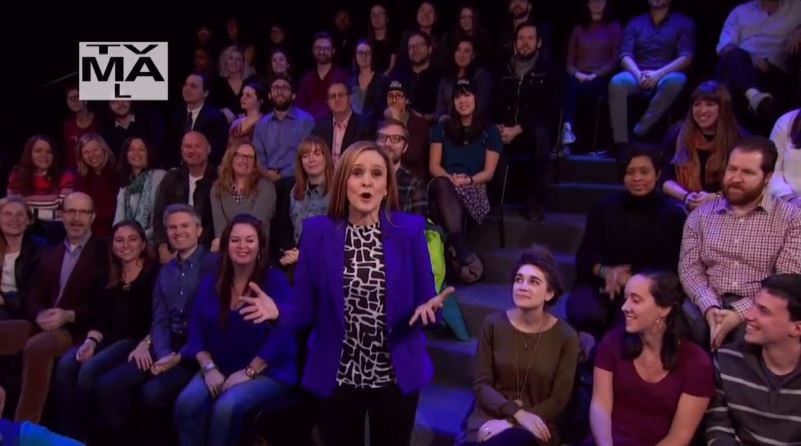 WRGT-TV ANCHOR [on 02/22/16]: The State of Ohio will no longer fund Planned Parenthood. Governor John Kasich has signed a new bill into law this weekend. [SCREEN WIPE] That money supports things like HIV testing, cancer screenings and domestic violence prevention.