Former NBC Nightly News anchor Tom Brokaw provided a history lesson on the New Hampshire primary during the 4:00 p.m. Eastern hour of MSNBC’s political coverage and when describing the situation on the Democratic side in 1992, he claimed that then-Arkansas Governor Bill Clinton lost the Granite State “amid rumors of womanizing” despite the fact that such claims were proven true.

Brokaw opened by ruling that “New Hampshire is a battleground of unpredictable successes and huge disappointments” and started his lesson with 1968 and the “strong second” by ultra-liberal Eugene McCarthy and how it “was enough to drive President Johnson from a second term.”

In the next two primaries, Brokaw explained that Jimmy Carter was “a little known southern governor, won New Hampshire's hearts with his down-home style in '76” but eventually fell aside four years later as Ronald Reagan emerged “after a dramatic showdown with George Bush 41, who had beaten Reagan in Iowa.”

Following a nod to how the elder Bush “got his turn in '88, defeating an angry Bob Dole, who had beaten him in Iowa” (and some old news clips), Brokaw turned to the Clintons with this absurd declaration about Clinton’s sexual past: “In 1992, Bill Clinton lost New Hampshire amid rumors of womanizing. The voters here gave the man from Hope just enough hope.”

Brokaw weaved his way through 1996 and 2000 before ending at 2008, but what’s noting of course was his choice of words when it came to the future President (and specifically the case involving Gennifer Flowers).

This sort of thinking by the left that what Clinton’s done for decades with other women has been dubbed “rumors” and even “alleged” (as NBC’s Savannah Guthrie did on December 29, 2015) has been a well documented topic for the Media Research Center and, if this writer had to bet, it’ll continue to be an issue for the foreseeable future.

The transcript of the report from MSNBC’s The Place for Politics 2016 on February 9 can be found below.

MIKA BRZEZINSKI: New Hampshire relishes its role in presidential politics as the first in the nation primary. It's a state that plays by its own rules and has built a reputation for surprises. NBC's Tom Brokaw takes a look back at the history of the New Hampshire primary. 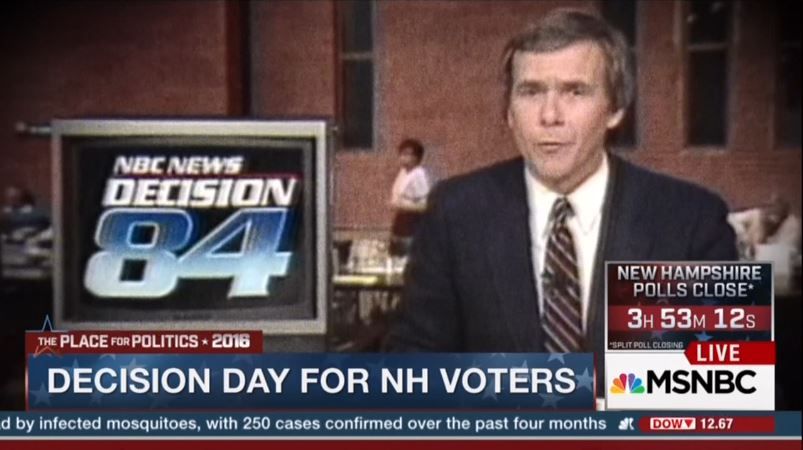 TOM BROKAW: New Hampshire is a battleground of unpredictable successes and huge disappointments. [in 1984 following the New Hampshire primary] Boy, did New Hampshire come up with a surprising finish tonight.

UNIDENTIFIED NEW HAMPSHIRE PUNDIT: Because of New Hampshire's dependence, there may be more characters per capita in New Hampshire than you might find in other places. You often get unexpected questions or unexpected confrontations.

EUGENE MCCARTHY [in 1968]: It changes the political picture in America for 1968.

BROKAW: Gene McCarthy finished a strong second in 1968, but his student crusade against Vietnam was enough to drive President Johnson from a second term.

THEN-PRESIDENT LYNDON B. JOHNSON [in 1968]: I shall not seek and I will not accept the nomination of my party for another term as your president.

BROKAW: Jimmy Carter, a little known southern governor, won New Hampshire's hearts with his down-home style in '76, but by 1980, it was Ronald Reagan's state, after a dramatic showdown with George Bush 41, who had beaten Reagan in Iowa.

RONALD REAGAN [in 1980]: I am paying for this microphone.

BROKAW: Bush got his turn in '88, defeating an angry Bob Dole, who had beaten him in Iowa.

SIDEWALK HECKLER [TO DOLE, in 1988]: Voted for tax increases 600 times in your career. Can you defend that?

BROKAW [TO DOLE, in 1988]: And Senator Dole, is there anything you would like to say to the Vice President?

BILL CLINTON [in 1992]: New Hampshire tonight has made Bill Clinton the comeback kid.

BROKAW: By '96, Pat Buchanan with almost no money, but a populist touch. He called his campaign peasants with pitch forks, stunned the GOP establishment in New Hampshire, but faded later. In 2000, another Bush, 43, brimmed with confidence, and then left the state a 16-point loser to Senator John McCain, a maverick, who even in a bus called the Straight Talk Express, couldn't keep his momentum going.

VOTER [TO THEN-SENATOR BARACK OBAMA]: Congratulations on your win.